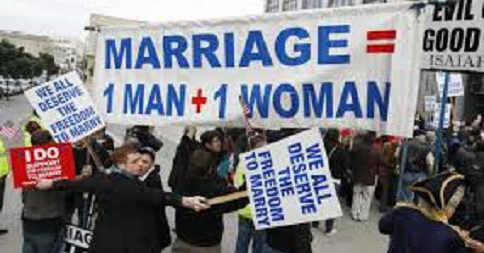 In the continuing debate on same-sex “marriage,” proponents commonly highlight the 1,049 benefits extended by the federal government to couples united in marriage. They claim that such benefits and those of the states should also be extended to homosexual couples.

Indeed, this was the reasoning of the New Jersey’s Supreme Court judges who ruled that the state must extend state benefits to same-sex couples by the mere fact that they are analogous couples. In the name of a supposed equality of relationship, they mandated same-sex “marriage” or its exact equivalent on the Garden State.

In face of this ruling, some fundamental questions need to be asked: why does the government bestow so many rights upon two individuals in the first place? What possible vested interest does the state have in promoting marriage? How does it serve the common good?

If such rights are extended simply to facilitate the mutual affection between two individuals, there is no real benefit to society in such an arrangement. The state is not in the business of making people feel good or subsidizing personal happiness. If that were the case, then any group of people or even business partnerships could claim benefits.

It is exactly because traditional marriage goes far beyond the mutual affection of the two parties that makes it an irreplaceable social good and necessitates the conferring of those 1,049 benefits.

Marriage is not about individuals but families. It is an institution that predates the State whereby a man and a woman mutually agree to give themselves to each other until death principally for the sake of the interest of the children born to them.

The State extends benefits not only to make couples happy but to facilitate the often arduous task of creating a stable, affectionate and moral atmosphere for the upbringing of children – the future of civil society.

Indeed, traditional marriage is so fecund that those who would frustrate its end must do violence to nature to prevent the birth of children by using contraception. The natural state of marriage is to produce not only children but many children to populate the state.

On the contrary, same-sex unions are so sterile that those who would circumvent nature must employ costly and artificial means or employ surrogates to bring about adoptive children. The natural state of such unions is not to produce any children, much less many children.

Such unions therefore fail to fulfill marriage’s social good since most simply have no interest in either procreating or employing costly artificial substitutes.

However, marriage is more than just children. Mere procreation cannot possibly be the only end of marriage for this can be done without the matrimonial bond. Marriage must insure the best possible environment for the growth, development and future of children which in turn increases the spouses’ mutual love.

Again, the state knows that marriage between a man and a woman is the best possible means of insuring this goal which benefits the common good. Historically, the State has invested heavily in insuring this bond.

The reasons are many. First the children of such unions are normally the flesh and blood of both parents who see their offspring as extensions of themselves. Such unions provide a father and a mother, complimentary role models that perform different functions in child development. The children also can have the added intense affection of numerous siblings of those same parents.

The parties of traditional marriage make a life-long commitment to maintain this bond to provide a stable atmosphere for the children to develop. Moreover, they agree to exercise moral restraint and fidelity to their marriage vows to prevent outside elements from interfering in their union and thus disturb the moral well-being of their offspring.

The experience of centuries gives irrefutable testimony as to how these blood relationships inside a stable moral climate naturally lead to affection and the creation of the best possible conditions for the upbringing of children.

The same cannot be said for the few homosexual households with children. The conditions that are universally recognized as extremely beneficial to the child in traditional marriage are patently absent in same-sex unions.

Same-sex relationships, which developed from a lack of moral restraint toward social norms and fidelity, cannot guarantee the same moral atmosphere of harmony crucial to the moral development of children.

Moreover, any children inside such unions must adapt to sectors of the populations that suffer from abnormally high levels of health problems, infectious social diseases, mental health problems, alcoholism, drug use, suicide rates, domestic abuse, child abuse and pedophilia. In the absence of long-term studies, no one knows all the effects of such abnormal conditions on the development of the child. In effect, these children are being made the guinea pigs of a cruel social experiment.

In short all the indications show that such relationships naturally lead to serious risk in the upbringing of the child.

In short, same-sex unions fulfill none of the requirements that would make them a social good necessitating state benefits.

Advocates will object that traditional marriage has its abuses and exceptional cases. It is true that many abuse the institution by deciding not to procreate or fail to provide a proper atmosphere for the upbringing of children. Sterility exceptions or the marriage of elderly people too old to conceive, on the other hand, are exceptions accidental, not essential to marriage. Neither the sterility nor the abuses by some in marriage change the design of the institution or become the rule.

Duties of the State

The State therefore does well to bestow numerous benefits on an institution that by its very nature and design are proven to provide all the condition for the mutual affection of the spouses and a stable, affectionate and moral atmosphere for the upbringing of children.

However in the case of same-sex unions, the State is not giving its support to the fruit of that union – the children – but to the “love” of two individuals.

The State cannot show support for a union which by design will not perpetuate society. It cannot in justice confer benefits upon those who cannot, by the same nature of their relations, fulfill the function for which the benefit was created. It cannot turn the exception of some kind of surrogate parenthood into part of the general rule.

Moreover, the State cannot actively promote a state of affairs that puts at risk in any way or creates obstacles to the natural development of those few children that are thrust into this anti-natural family model.

By conferring benefits on this flawed design, the State becomes its active promoter and works against the common good.

Indeed, the very 1,049 federal benefits that same sex “marriage” advocates claim as the grounds for a misplaced and misunderstood “equality” become 1,049 reasons for opposing such specious unions.