11 Times The World Was Supposed To End And Didn’t 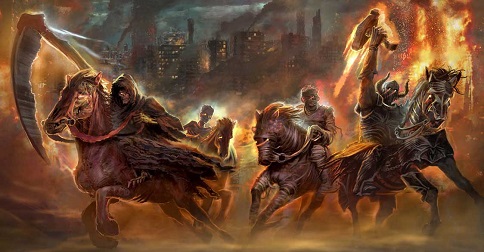 This is the day the world will come to an end, according to a Christian group based in Philadelphia.

It looks like we’re all still here, though it’s probably not the last time we’ll be warned about Earth’s annihilation.

Doomsday theorists and religious sects have been predicting The End for thousands of years.

Fortunately, all of these dates have come and gone uneventfully.

To maintain your faith that you’ll live to see October 8, we’ve compiled 11 other dates when the world was supposed to end and didn’t.

Christian authorities believed the new millennium would be the second coming of Jesus.

In anticipation of his return, many people disposed of their belongings, left their jobs, and abandoned their homes.

When the date came and went with no apocalypse, folks who thought the end was near realized they had miscalculated Jesus’ age and decided the world would actually end in A.D. 1033.

This, as we know, also turned out be a vast miscalculation.

London astrologers freaked everybody out when they interpreted the alignment of planets in the constellation Pisces (a fish) to mean the world would be wiped out in a massive flood.

Tens of thousands of people sought refuge on higher ground and some people built arks.

On May 19, 1780, a heavy gloom fell over New England, prompting a religious group known as the Shakers to believe Judgment Day had come.

Though the unusual blackened sky, later called the “Dark Day,” was most likely caused by a mix of smoke from forest fires and heavy fog, it sent the religious sect on a mission to spread their message of celibacy as the path to redemption.

William Miller tricked thousands of followers, or Millerites, when he declared that the world would end between March 21, 1843 and March 21, 1844.

When the year rolled over and nothing happened, the date was moved to October 22, 1844.

After Jesus failed to arrive for the second time (known as the “Great Disappointment”), some Millerites left Miller’s religion and went on to form the Seventh-day Adventists.

During the early 20th century, astronomers learned that comet tails contained a poisonous gas called cyanogen. The discovery sparked widespread panic in 1910 when people learned that Earth would pass through the long tail of Halley’s Comet.

Although scientists agreed that earthlings were not in danger, newspapers played up superstitions, convincing the public that the end was near.

Of course, there was nothing to worry about. The tail’s noxious gas would never be able to get through Earth’s atmosphere, and there was not enough gas to cause harm in the first place.

In 1876, Charles Taze Russell, founder of the Jehovah’s Witnesses, predicted that Christ would return in 1914.

Since that prophecy failed, the society has predicted at least seven other dates when Armageddon would occur.

The founder of the Worldwide Church of God, Herbert W. Armstrong, told members of his church that the rapture would take place in 1936, and that only they would saved. After the prophecy failed, he changed the date three more times.

In 1974, astrophysicists John Gribbin and Stephen Plagemann published “The Jupiter Effect,” which claimed that on March 10, 1982, the planets would align on the same side of the sun, creating gravitational effects that would lead to catastrophic earthquakes.

As goes without saying, the book was eventually followed by “The Jupiter Effect Reconsidered.”

Nobody was really sure what would happen on January 1, 2000, except that it necessitated stockpiling bottled water, D batteries, and guns.

The fear was that computers would not understand the year “00,” reading it as 1900 instead of 2000. Presumably, this would cause the technological universe to collapse.

The millennium came. Everyone was fine.

Harold Camping, president of the Family Radio Network, created a lot of hoopla four years ago when he predicted that world would end in a series of rolling earthquakes known as “The Rapture.”

After May 21 came and went sans any signs of hellfire and brimstone, Camping pushed The End back to October 21.

The preacher, who died in 2013 at the age of 92, decided to stop making predictions after that and resigned from his post shortly after the second failed doomsday forecast.

The world was supposed to end on December 7, 2012, according to ancient predictions based on the Mayan calendar.

Earth survived, perhaps because Mayans never actually predicted an apocalypse. This is just when they got lazy with their record keeping and stopped updating the long-form version of their 5,172-year calendar.

Just as our calendar starts the year fresh by repeating all 12 months starting January 1, the Mayan calendar now begins another long cycle.