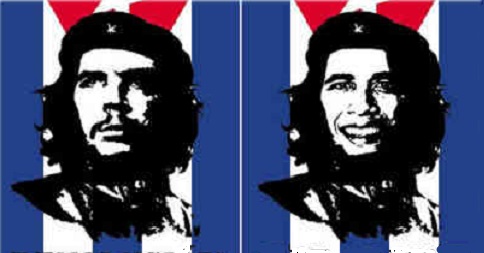 Swaggering into Havana dressed in army fatigues with his signature cigar, Castro claimed the island as his own. Like a thief making off with a nation in the middle of the night, Obama waiting until Congress was out of town, opened America to a Communist totalitarian state.

Obama’s dictatorship is one that patently ignores countless thousands of Cuban prisoners, some of them who have been in some of the worst jails in the western hemisphere for decades and comes as a knife in the heart for the loved ones of the so many Cubans already tortured and murdered.

Thousands who fled for their lives from the Castro brothers, losing everything they had won’t be sleeping tonight in Miami.

Swapping a single hostage for spies found guilty by American juries and jailed for killing Americans is how Obama began the ‘re-establishment of diplomatic relations between the U.S. and Cuba’ for the first time in more than half a century.

Obama and his administration boast it is business. But they are not now, and never will be, doing business with the bread-and-butter Cuban people but with the ice-hearted Communist Cuban government, which jails, tortures and murders its own people and which has been doing so ever since Castro seized power as dictator.

With nothing to legalize it on paper, and with no one even talking about it, there is no onus on Cuba to back off its shameful record on human rights. Yet Obama spouts,‘isolation has not worked’ since the Castros’ communist regime hasn’t softened its position since JFK was president.

“We cannot keep doing the same thing and expect a different result,” is the propaganda stated on a White House ‘fact sheet’. ‘It does not serve America’s interests, or the Cuban people, to try to push Cuba toward collapse.”

It was never the Cuban people but their government under a crushing Communist system pushing Cuba toward collapse. Just as Obama blames the American people for everything he personally sees wrong with America, is he now expanding his destructive Fundamental Transformation of America to Cuba, which sits only 90 miles off the coast of Florida?

Just as Obama last May released five generals back to the Taliban for the outrageous swap of AWOL American soldier, Bowe Bergdahl, Obama swapped three spies for the release of American aid worker Alan Gross, who arrived back in the U.S. today after five years in captivity.

Gross was released along with an unnamed U.S. ‘intelligence asset’ in exchange for three Cuban spies held by America—including one serving two life sentences related to the downing of two airplanes in 1996. (Daily Mail, Dec. 17, 2014)

Town Hall, Canada Free Press (CFP) columnist Humberto Fontova, who was earlier on the Mark Levin Radio Show, told CFP last evening that according to the FBI’s affidavit, the 26 charges against the convicted Castro-spies included:

• Gathering intelligence against the Boca Chica Air Naval Station in Key West, the McDill Air Force Base in Tampa and the headquarters of the U.S. Southern Command in Homestead, Fla.;

“These spies also infiltrated the Cuban-exile group Brothers to the Rescue, who flew unarmed planes to rescue Cuban rafters in the Florida straits, also known as “the cemetery without crosses,” said Fontova. “The estimates of the number of Cubans dying horribly in the “cemetery without crosses” run from 50-85,000. Brothers to The Rescue risked their lives almost daily, flying over the straits, alerting and guiding the Coast Guard to any balseros, and saving thousands of these desperate people from joining that terrible tally. (Prior to Castroism, by the way, Cuba was swamped with more immigrants per-capita than the U.S., including during the Ellis Island years.) So you can imagine how the Cuban exodus embarrasses the Castroites, including those in the U.S.

“By February of 1996, Brothers to The Rescue had flown 1,800 of these humanitarian missions and helped rescue 4,200 men, women and children. That month Danny Glover’s and Pete Seeger’s cause célèbre’ passed to Castro the flight plan for one of the Brothers’ humanitarian flights over the Cemetery Without Crosses.

With this info in hand, Castro’s Top Guns, jumped into their MIGs, took off and valiantly blasted apart (in international air space) the lumbering and utterly defenseless Cessnas. “Four members of the humanitarian flights were thus murdered in cold blood by communists.

“Three of these murdered men were U.S. citizens, the other a legal U.S. resident.”

Obama’s Open for Business Cuban initiative ignores the fact that his own administration lists Cuba as a State Sponsor of Terrorism.

“..Second, I’ve instructed Secretary Kerry to review Cuba’s designation as a State Sponsor of Terrorism,” he said today. “This review will be guided by the facts and the law. Terrorism has changed in the last several decades. At a time when we are focused on threats from al Qaeda to ISIL, a nation that meets our conditions and renounces the use of terrorism should not face this sanction.”

Today’s announcement followed more than a year of secret talks between the U.S. and Cuba.

Creepier still, those secret talks did not take place on American soil, but in another country—Canada.

The fix was already in because as Obama was speaking, Cuban President Raul Castro was addressing his own nation from Havana. Obama and Castro had spoken by phone for more than 45 minutes Tuesday.

The New Year worry for a watching world is if Obama can open up channels for drastic policy changes in Cuba without the knowledge of the American population and Congress, when will he do the same for Iran?