Enemies Foreign and Domestic Americans Learning to Live with Treason

Americans Learning to Live with Treason 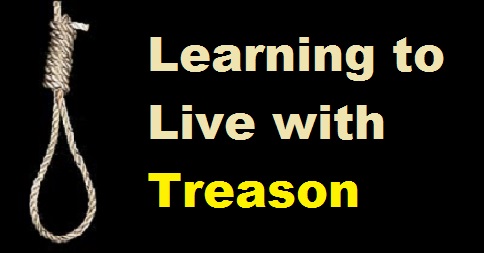 Pop the champagne corks, set off the fireworks, former FBI Director, James Comey nixed the “Russian collusion.” In his testimony before the Senate Intelligence Committee, Comey cleared President Trump of all charges – no collusion, no conspiracy, no investigation, no there there.

Does anyone else see the insanity here – that we celebrate when the president is cleared of phony charges, that we breathe a sigh of relief when the fired FBI director fails to establish an obstruction of justice charge?

Does anyone wonder why we anxiously watch each inane congressional hearing to see if the left gets the goods to pull off its coup, why we wake up each morning terrified that the insurgents have hit their mark, found something, anything they can use to depose a duly elected president?

We are watching, in real-time, a palace revolution, an overt effort to remove the president of the United States. Just as James Comey proudly admitted he leaked privileged communication to the press, so these insurgents brazenly brag that they want to harm the president, to impeach him, to overthrow our government. The American people seem shockingly oblivious to the looming danger.

How did we get here? Well, let’s give credit where credit’s due: the left has its ducks in a row. Leftists are carrying out a carefully planned, well executed plot to take control of our government.

Oh, it’s not soldiers bursting through the White House gates to forcefully remove the president, or, as the left says, not yet. No, they’re using a form of behavior therapy, systematic desensitization, to numb the American people to their insurgence.

Systematic desensitization is a technique used to treat phobias. The patient, while relaxed, is exposed to progressively more frightening aspects of his phobia. For instance, treatment for arachnophobia, fear of spiders, might start by showing the phobic an image of a spider. The patient employs relaxation techniques while exposed to the image until he overcomes his anxiety. Next, a real spider may be introduced, far away, in a cage. After the person accepts that exposure, the spider is taken out of the cage and moved closer and closer until the patient is able to hold a live spider in his hand.

Congress, corporate and social media, activist courts, and a contingent in our intelligence community unite to form a cabal (a conspiratorial group of plotters). This cabal uses this desensitization technique to condition us to overcome our fear of losing our freedom, of a disappearing democracy.

Using this technique, the cabal does something wrong, illegal, or unconstitutional – behavior that’s a threat to our republic.

• Benghazi – Obama and his administration to the American people that a video caused the horrific massacre. President and allies openly engage in cover-up.

• FBI investigation on Hillary Clinton – Comey announces Hillary’s guilty on all counts, then the judgment, and she walks. A two-tier justice system; Hillary’s above the law.

These are just a few of the unacceptable transgressions by our corrupt leaders. Each time, outraged conservatives demand that the perpetrators be brought to justice. Each time, the press gaslights the American people with a media blackout, acts as though the incident never happened. Each time, the cabal rides out the news cycle until the story fades, and everyone’s home free.

Time and again, the deception, lawlessness, violation of the Constitution, or open act of sedition is met with disbelief. This is banana republic stuff; these things don’t happen in America. The people look to our system of checks and balances to restore order.

Except the only checks the members of Congress care about are the ones from their donors, and some in Congress are actually members in good standing with the cabal. But the courts will intervene, right? Nope – the courts are no longer confined to interpreting the law. They now make the law – not a reprieve, but another hurdle.

Oh, and our media, that last bastion of democracy – they’re actually facilitating the coup. They ignore the transgressions, excuse them, or explain them until our anxiety wanes and we learn to live with treason. Then it’s on to the next level, the spider moving ever closer.

Conservatives sidestep the seriousness of this open rebellion. National media waging a campaign to usurp our president is not bad journalism; its sedition:

To write, print, utter or publish, or cause it to be done, or assist in it, any false, scandalous, and malicious writing against the government of the United States, or either House of Congress, or the President, with intent to defame, or bring either into contempt or disrepute, or to excite against either the hatred of the people of the United States, or to stir up sedition.

Wow – that’s like the media’s playbook, right? Well, there are some who see the problem. Freedom Watch’s Larry Klayman is demanding regulatory enforcement action against CNN for “a persistent campaign of dangerous, incendiary, false, and libelous propaganda against now President Trump.” It’s a start.

The media’s role in this conspiracy is why their effusive praise for the newly appointed special prosecutor of nonexistent crimes, Comey’s BFF and mentor, Robert Mueller, is a red flag. The dichotomy of a prosecutor without a crime to prosecute is troubling. Questions abound. What’s his mission? How will he prosecute if his friend, Comey, is implicated? Or maybe we’re just being paranoid, overly dramatic. Or maybe it’s the next level, the spider within reach.

What’s next? Will this cabal one day walk into the Oval Office and escort the president out, to prison, to execution? Ridiculous, you say. This is America.

Is it America when Democrats “resist” and “obstruct” our government with the stated intention of weakening the president, making him an easier target; when courts establish authority over our commander-in-chief on foreign policy; when our intelligence communities use their superpowers to spy on the American people with impunity?

Is it America when the left invents a story, Russian collusion, and every branch of our government advances the lie, when the media join forces to turn news channels into indoctrination centers to smear the president, to prop up the Russian fiction?

Even if the Russian contrivance falls through, these rebels will keep the ground they’ve taken, and it’s significant. They’ve recruited a sizable number to their cause with their lies, fake scandals, and Hitler-style indoctrination. They’ve normalized lawlessness and deception, rigged investigations, erected a two-tiered justice system, rigged debates, rigged elections, and instituted a national campaign to usurp the president. Seriously, what’s left?

They could still pull the Russian thing off. After all, the only steps we’re taking to stop this coup d’état is to whine about witch hunts, call them sore losers, left-wing media, and spineless Republicans. But in the end, that’s like complaining that the guy slashing you to death is using a dull knife.

Lies and fake news are the norm these days, the once unthinkable and now the expected. This cabal is a powerful alliance. If we don’t stop them, if we continue to allow this open treason, they’ll eventually reach their goal, and there will be no way back.

Ronald Reagan warned: “You and I have the courage to say to our enemies, ‘There is a price we will not pay.’ ‘There is a point beyond which they must not advance.'”

I pray he’s right. Their price is our freedom, their next stop tyranny. And they’re moving ever closer.