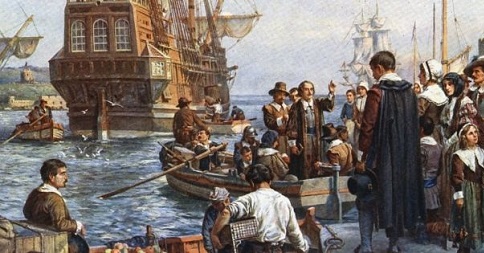 This year, rather than allow Americans to enjoy turkey and stuffing without being badgered, President Obama chose to dumb down his Thanksgiving message by suggesting that Syrian refugees are present-day pilgrims.

Here’s what historically inaccurate Barack had to say about the droves of Muslim refugees he plans to inject into a population the president deems no longer Judeo-Christian:

Nearly four centuries after the Mayflower set sail, the world is still full of pilgrims – men and women who want nothing more than the chance for a safer, better future for themselves and their families. What makes America America is that we offer that chance.

What Obama chose not to mention was that in 1620, when the Mayflower pilgrims fled England, they were escaping religious oppression similar to that being imposed on America by a president who acts like King Charles I of England.

Moreover, isn’t this the same Barack Obama who normally condemns the Mayflower pilgrims for the sin of visiting “unseen disease, devastation, and violence” upon indigenous peoples?

Just last month, as part of a Columbus Day history lesson, the president reiterated what murderous refugee pilgrims from England did to the peace-loving natives by introducing “[p]reviously unseen disease, devastation and violence … [into] their lives.”

In his Columbus Day 2015 presidential proclamation, Obama said that “as we pay tribute to the ways in which Columbus pursued ambitious goals – we also recognize the suffering inflicted upon Native Americans and we recommit to strengthening tribal sovereignty and maintaining our strong ties.”

Determined to advance unity and forgiveness, the president took the opportunity presented on Columbus Day to point out that “[t]hough these early travels expanded the realm of European exploration, to many they also marked a time that forever changed the world for the indigenous peoples of North America.”

So which is it, Mr. President? Did pilgrims wreak havoc on native peoples, or were they just persecuted refugees seeking a better life?

If Obama really believes that the Mayflower pilgrims were the bad guys, rather than learn from history, why is he chancing exposing Americans, via a new group of refugees, to devastating levels of modern-day “disease, devastation and violence”?

Rather than treat refugees with caution, instead, Barack Obama threatens and bullies the wary into welcoming millions of migrants he knows can’t possibly be properly scrutinized. Not only that, but the president never mentions that there are already 1,000 soldiers of Allah on a U.S. watch list, and the FBI is “using elite surveillance teams to track at least 48 high-risk ISIS suspects.”

This raises the following question: unless the president’s goal is to level the playing field by ensuring that America reaps the sort of justice he thinks we’ve managed to evade since the pilgrims conquered Plymouth Rock – why deliver ISIS a similar opportunity to conquer the West?

As for “sharing the wealth,” let’s remember that although the president lives in a mansion with 132 rooms – 35 of which are bathrooms – Obama shares nothing. Yet in his Thanksgiving message, the president commended those who offer to house and feed refugees he knows full well cannot be vetted by a federal government busy sending Social Security checks to dead people.

In an attempt to shame those with extra bedrooms and full pantries, Obama shared a heartwarming Thanksgiving story about “[o]ne woman from Pennsylvania [who] wrote to [him] to say, ‘Money is tight for us in my household. … But I have a guest room. I have a pantry full of food. We can do this.'”

Wait! The president saw fit to praise a descendant of the pilgrims he usually blames for delivering “unseen disease, devastation and violence” to Native Americans?

So in other words, according to Barack Obama, being generous toward what could develop into a future sleeper cell is now what it “means to be an American.”

And while all this warm cultural correction and camaraderie is indeed charming, maybe someone should inform Mr. Obama that according to the National Geographic Kids politically correct account of the first Thanksgiving:

The peace between the Native Americans and settlers lasted for only a generation. The Wampanoag people do not share in the popular reverence for the traditional New England Thanksgiving. For them, the holiday is a reminder of betrayal and bloodshed.

With that in mind, and notwithstanding the potential for “betrayal and bloodshed,” Obama implied that, whether they realize it or not, agreeable citizens will play a “small part” in helping to write a chapter in America’s fundamentally transformative history that will inspire our enemies to celebrate.

Then, after politically exhausting his Thanksgiving Day message, Obama headed home to stuff his gullet with turkey, ham, and six different types of pie, none of which he shared with the guy who jumped the White House fence or with a family of resettled refugees.

cytotec with no rx Read more about the evil of Islam by clicking on the below website link.