Cashing In On Church: The Richest Mega Pastors In America 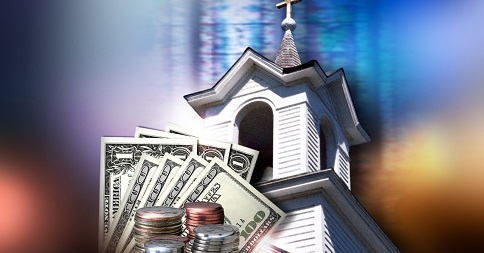 Many people don’t believe that pastors can make much money. However, these pastors will show you that they can indeed make the big bucks!

It might be argued that the reason why ministers are more likely to make money today is because they utilize more money making opportunities such as writing books, producing movies and speaking engagements.

As a result, congregations quickly put their trust in their ministers, pastors or preachers who have become not only some of the most renowned spiritual mentors in the world but also some of the wealthiest. So just how much are some pastors really making?

Charles E. Blake is a California bishop who earned $900,000 per year and lives in a 10,000 square feet Beverly Hills mansion. He earns his massive salary from the help of 20,000 weekly members to his church. While he lives the good life, his average parishioner earns just $27,907 while living in poverty in South Central Los Angeles.

In 2009, Graham announced that he would give up new contributions to his retirement plans and not take a further salary from the Billy Graham Evangelistic Association. His wealth, estimated in the millions, shows that a family dynasty can be created in the religious world.

Oklahoma native Bill Moyers started his career with a journalism internship with the United States Senate after completing a degree at the University of Texas. Senator Lyndon B. Johnson developed a liking for the young man and helped to secure work for Moyers as a TV editor. Moyers later hosted several television programs ,including many on PBS. Some estimates indicate that he earned more than $20 million in taxpayer money for his work on PBS, although he has never confirmed that amount. Moyers decided after several years to pursue his Master of Divinity, and in 1959 he was ordained a Baptist minister. He would later be appointed as the Associate Director of the Peace Corp and would service us the 13th White House Press Secretary under Johnson from 1965 to 1967. He has given a handful of sermons since his early years in politics, but now the 81-year-old journalist is best recognized as a pioneer in freedom of the press and public broadcasting.

Matt Crouch is a son of Paul and Janice Crouch, which teamed up with Jim and Tammy Faye Bakker to establish the Trinity Broadcasting Network. TBN would eventually become the largest Christian television network in the country.

Janice Crouch died in 2016, at the age of 78, after a stroke. At the time of her passing, the network was embroiled in several lawsuits. One involved a rape and others were over financial issues. Janice Crouch’s fortune at the time of her death was $50 million. Crouch’s son Matthew now has control over Trinity’s assets, which according to a recent tax return are now worth more than $1 billion.

Dr. Robert Charles Sproul, a Pittsburgh born and raised pastor, is the founder and chairman of Ligonier Ministries. The church was established in 1970 and was started as a college and seminary for students. The faith-based organization was soon built into a nationally recognized program which hosts theological conferences with renowned speakers from around the world. Sproul founded the internationally broadcasted Sirius XM radio program “Renewing Your Mind.” Unlike his contemporaries, he avoided television and launched the Reformation Network (RefNet), an online radio station for reformed Christians, in 2012.

RC Sproul wrote a blog post about how much pastors should earn. In it he says “Pay him well enough that he is able to give with great generosity.” One conservative estimate puts Sproul’s net worth at $2 million.

Rossi was known as the rock and roll preacher after becoming a born-again Christian following a drug overdose. Rossi started playing his music on The 700 Club while working on his biblical studies degree at Liberty University. In 1984 he opened his first church — The Fellowship. In 1994 his wife Sherri was found nearly dead on the side of the road. Rossi was named as the top suspect. His trial ended with a hung jury, although the damage to his reputation had already been completed.

Jack Leo Van Impe graduated from the Detroit Bible Institute in 1952, and has earned the nickname “Walking Bible” for his ability to quote the scripture. Van Impe started his career as an evangelist on the Billy Graham Crusades. In 1954 he married Rexella Mae Shelton. Together, the newlyweds started Jack Van Impe Ministries. Rexella served as his co-host of the television series, “Jack Van Impe Presents.” Sixty years later, the TV series is still shown across North America. Reports have suggested that the Jack Van Impe Ministries International Foundation has a yearly revenue of about $2.5 million.

In 2011, Van Impe ceased airing his program on Trinity Broadcasting Network after they refused to air an episode of his show. In the episode, Van Impe had expressed criticism of Christians who wish to incorporate Islamic practices into their organizations.

Ernie Fletcher has played a politician, a preacher, and a physician. The Kentucky native started his professional career with the United States Air Force, in the hopes of becoming an astronaut. After cuts to NASA’s budget and eyesight concerns, Fletcher earned a degree in medicine and opened a private practice.

He started working as a lay Baptist minister in his community and became active in Kentucky politics. In 1999, Fletcher joined the United States House of Representatives, where he served until 2003. Fletcher was elected as state Governor in 2003, over state Attorney General Ben Chandler. He held that position until 2007, when accusations of impropriety surfaced.

However, while Fletcher was in office, he was accused of unethical hiring practices that overshadowed his reelection bid. During his time in office, Fletcher also almost lost his medical license. He signed a death warrant for a man who had been convicted of a double murder and sentenced to death. The Kentucky Board of Medical Licensure investigated him for this, as the state’s laws state that doctors are ineligible to participate in executions in any way. The Board determined that Fletcher had acted as Governor and not as a physician when he issued the death warrant. Bowling died of cancer in prison before the execution could take place.

Despite many years spent in the ministry, Fletcher amassed most of his rumored $3 million net worth with his work in politics. Congress members can earn as much as $223,500 a year from salary alone. YouBrite reports his net worth as high as $16.7 million, which is an unconfirmed amount.

Swaggart is one of the most popular Louisiana pastors of all time. Ordained in the 1950s he would eventually launch his own AM radio network which only grew his thirst for an even larger audience. Eventually he turned his attention to TV, hosting an hour-long weekend telecast that was aired on more than 200 networks. He eventually lost the public favor in the late 1980s and early 1990s when he was faced both prostitution and sex scandals. He would eventually admit to his transgressions in his infamous “I have sinned” speech. He would regain some of his followers and go on to earn $1.5 million through his music, radio and television ministry.

Stanley started work as a minister in Virginia when he was just 14-years-old. Graduating from the University of Richmond and the Southwestern Baptist Theological Seminary, he moved to Atlanta, Georgia where he became the pastor of First Baptist Church. In Atlanta he started The Chapel Hour TV program in 1972. In 1978 his program was syndicated across the country by the Christian Broadcasting Network. He eventually started In Touch Ministries, which led to a syndicated radio broadcast that took his message worldwide. His program In Touch with Dr. Charles Stanley is translated across hundreds of radio and television networks in over 100 languages.

Davis is actually better known for his time as a songwriter, singer and actor. He wrote such famous hits as Never Can Say Goodbye and Lookin’ Through the Windows for the Jackson 5. Well before his first taste of fame, Davis pursued theological studies and earned his Master of Divinity from Andrews University. He was ordained in 1987. Over the past 25 years he has served as the co-founder and pastor of the Welcome Christian Center in Huntington Beach, California. He has made various guest appearances on the Trinity Broadcasting Network and has hosted the Gospel Super fest for the last eight years.

Best known for his messages about prosperity and abundance, it appears Copeland can reference quite a bit of firsthand experience. Before his conversion to Christianity he had commercial success as a recording artist, releasing 1957’s “Pledge of Love” which made it to #17 of the top 40 billboard hits of the year. Copeland has had a lifelong love for flying as well, which allowed him after conversion to become the personal pilot of Oral Roberts before starting his own ministry and owning his own private jet (admittedly paid for by church donations). Copeland and his family also reside in a $6.3 million estate, where television audiences are invited to sit around the table with the family on “Believers Voice of Victory”.

With Dollar in his name, was there any doubt this pastor would appear on such a list? Known as one of the flashiest of American Ministers, he owns a Rolls Royce, multiple $2.5 million dollar estates and in recent years been given an F by the Ministry Watch for financial transparency. To make matters worse, Dollar was arrested in 2013 for allegedly attacking his own daughter but the charges were dropped after agreements to join anger management groups. He like quite a few of his comrades in this list preaches almost exclusively the “prosperity” gospel. While receiving a Bachelor’s in Science for Education from West Georgia College, it appears this pastor has yet to learn the intricacies of “Do unto Others”.

Benny Hinn is perhaps the most openly controversial of any American Televangelist. Publicly claiming a gospel that empowers “faith healing”, he has been investigated by the United States Senate for manipulation of tax status, and his Ministry has been flagged with a “Donor Alert” by Ministry Watch. Regardless of this shady financial situation he continues to have a solid fellowship in both Canada and the United States. Followers of his teachings believe that if they are prayed over, they can be healed of any malady. Among his many luxury possessions is a Gulfstream G4 jet.