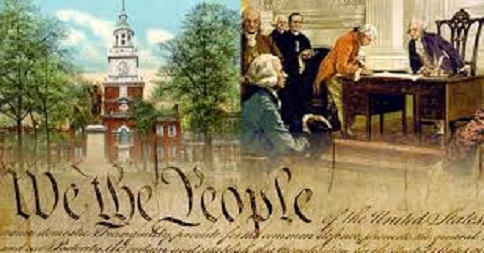 Constitution Day has come and gone and not surprisingly, hardly anyone noticed. The Constitution has become irrelevant to all but a few endangered Republicans on Capitol Hill, and is totally ignored or twisted beyond recognition by all – repeat, all – Democrats. This, of course, includes all the members, young and old, of the Ministry of Leftist Propaganda, aka, the “mainstream” media.

The only ones of us who cared to note the anniversary of the signing of the Constitution in 1787 have been designated by the so-called Homeland Insecurity and Injustice Departments as probable domestic terrorists. As most of the readers of news and information on this site know, patriotic adherence to traditional American culture, language, religion, politics, societal organization, education, morals, values, etc., has become not just politically incorrect, but since the courts no longer feel the need to follow the Rule of Law and instead apply their personal opinions, said adherence has been transmogrified into the globalist, fascist and Marxist definition of terrorism. So far, it’s been applied mostly as harassment. However, without strong push-back from We, the People, and (does “fat chance” mean anything?) our elected representatives, rounding up and incarceration of America-loving patriots is just a matter of time.

Meanwhile, the movement to destroy America gathers momentum, ostensibly spearheaded by the usurper, Barack Hussein Obama, but in reality, by those who pull his strings. Again, as most readers of news and information on this site know, every single policy and action of both the current administration and the Democrat Party as a whole, has been designed to:

2. weaken and eventually destroy the economy as a capitalist institution;

3. force all Americans into government dependency;

4. create a permanent, uneducated, unskilled underclass, what Marx referred to as the “lumpen proletariat”;

5. weaken, demoralize, and eventually destroy all branches of our armed forces;

6. create a militarized police state controlled by the Executive Branch of government;

7. weaken our standing and position as a sovereign nation vis-à-vis our friends, allies, and enemies;

8. give aid and comfort to our enemies, especially radical Islamic jihadists.

Other than that, everything’s just grand.

Space doesn’t allow listing all the individual illegal, unconstitutional, and outrageous policies and acts these traitors have foisted upon us. However, one recent and particularly heinous act on the part of Obama deserves special attention, due to the unspeakable consequence liable to result from it.

Again, as most of you know, the military-hating Obama has committed 3,000 of our troops to “fight Ebola” in Africa. Many are rightfully asking, “Why?” Given his clear hatred for the military and America, the answer appears to be that he and his string-pullers are well aware that many, if not all, of the soldiers will be exposed to and contract Ebola. Many, if not all, will die horrible deaths. The demoralization this horror will cause in the ranks will be catastrophic. Then, on top of that, Ebola will be brought home to America, to be spread far and wide, “letting America know how the poor countries of Africa feel.” Paranoid? Give me a better explanation for using our military, our highly trained killers of people and breakers of things, in a situation they have no training for.

It appears we are left with four alternatives. One is that those of us who still believe in the Constitution and want to live under the Rule of Law, in the democratic republic it prescribed for us, can seriously move towards secession. A recent poll indicated that a quarter of Americans, one out of every four, is open to this possibility, and the number is growing.

A second is that we revolt, but the consequences of this are not something most Americans at this time, are willing to accept.

A third is to turn out in massive numbers and elect conservatives to every office we can think of. Unfortunately, not all Republicans are conservatives, but frankly, at this point in time, any Republican is better than any Democrat. Period. If the Democrats keep control, it leads to the fourth alternative.

The fourth alternative is to do nothing, to allow the status quo to rule, thus continuing the headlong rush to a totalitarian, collectivist, Third World slave state that the current rulers in Washington are nearly done creating for us.

It is truly hard to believe how much damage has been done in the short six years that the Fraud in the White House, his handlers, and his accomplices in the Democrat Party have been our rulers, or on how many levels. We are beginning to understand, I hope, how the Germans were overwhelmed by Hitler and his National Socialists. For years, we have demanded, “How could they have let it happen?” I hope we are seeing how easy it is for government, with the collusion and connivance of the media and the education establishment, to spiral out of the control of the people. Oh, well…