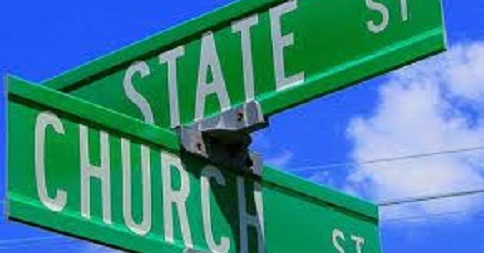 Crony Christianity challenges the separation of Church and State.

The crisis surrounding the flood of unaccompanied alien children into the U.S. has promoted crony Christianity.

It is a variation of the spider’s web of similar arrangements, spun between businesses and government, that we call crony capitalism.

The five players in crony Christianity are: (1) the bureaucrats who run ecclesiastically-related organizations; (2) the church laity aligned with the various denominations that underwrite those organizations, in-part or in-full; (3) officials within government agencies that grant money; (4) tax-payers who fund government grants; and (5) the clients who receive aid from the faith-based organizations that operate with government funding.

The Pathway to Crisis

For reasons that remain unclear and widely debated, the Obama Administration has choreographed the influx of tens of thousands of “unaccompanied alien children” (this term typed into TAGGS – Tracking Accountability in Government Grants System – accesses the list of grant recipients) into the U.S. from several Central American countries.

The physical and mental ordeal that the children encountered in their trek to America is a stain on those who encourage and facilitate the migration – on all the sides, of all the borders, involved.

The migration has been a reenactment of the Children’s Crusade of 1212 A.D. It is reasonable to say that when Jesus said, “Let the little children come to me,” he didn’t mean they come atop a boxcar and then cross the border behind a coyote.

The federal government began to prepare for the flood of children before the tide arrived, and before the legacy media amped-up its coverage of the story. Both knew what was coming before most of the rest of us did.

Those Christian social service organizations that already had an established funding relationship with the federal government stood near the front of the line to help resettle the children, along with secular organizations already knowledgeable of, and dependent upon, federal grants.

Many church leaders embraced the challenge to help transport and temporally house the children as an opportunity to express their faith. They neither could see, nor wanted to look, beyond the faces of the children.

This Fall, thousands of non-English speaking Central American children, many illiterate in their own language, are showing up at public schools that are ill-equipped to education them, as the crisis worsens.

Multiple non-religious social service organizations stood eager to receive grants to assist the “unaccompanied alien youth.” They include, but are not limited to, the following list of grant recipients gleaned from TAGGS records that provide the organization’s name, address, grant amount received in 2014, and the total amount in grants received over the indicated timeframe:

Here is a sampling of grants given to faith-based organizations to provide services for “unaccompanied alien youth”:

In late July 2014, a New York Times article celebrated that “U.S. Religious Leaders Embrace Cause of Immigrant Children.” The paper favorably compared the religious leaders’ response to the “angry pushback from citizens and local officials who have channeled their outrage over illegal immigration into opposition to proposed shelter sites.”

The Times quoted Russell Moore, President of the Ethics and Religious Liberty Commission of the Southern Baptist Convention, as saying, “This is a crisis, and not simply a political crisis, but a moral one…the anger directed toward vulnerable children is deplorable and disgusting. The first thing is to make sure we understand these are not issues, these are persons. These children are made in the image of God, and we ought to respond to them with compassion, not with fear.”

Moore beats a straw man. Citizen anger is not directed toward the children, but toward the government that uses children for political gain.

The Times quoted Kevin Appleby, Director of Migration Policy for the United States Conference of Catholic Bishops, who said, “We have to put our money where our mouth is in this country. We tell other countries to protect human rights and accept refugees, but when we get a crisis on our border, we don’t know how to respond.”

The questions to both these men are these: Who is responsible for the suffering and death of the children who died trying to get here, and for the on-going angst of the parents left behind?