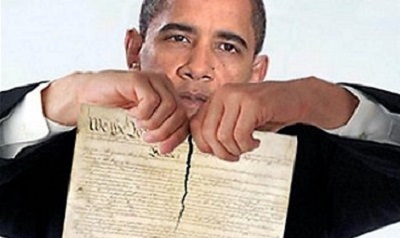 Which of those solemn promises has Barack H. Obama not betrayed?

I can’t think of a single one.

If Obama is different from other presidents, it’s not for the color of his skin, which is just a PR hustle to blackmail suckers into proving they aren’t racists. No: Obama will be historic for his fanatical leftism, which has no precedent in American history. The biggest headline is Obama’s ideology, not his race.

The left is a revolutionary cult, one that has no compunctions about violations of laws or human rights – for what they imagine to be a utopian cause, of course. But every single power cult in history is all for love and peace – once it takes over. Head-chopping Muslims sing the song of love and peace just as well as the left.

Karl Marx, 1848: “… there is only one means to shorten, simplify and concentrate the murderous death throes of the old society and the bloody birth pangs of the new, only one means – revolutionary terrorism.”

Vladimir Lenin, 1918: “the fundamental feature of the concept of dictatorship of the proletariat is revolutionary violence.”

Terrorist killings of innocent civilians are exactly the same as deliberate murder under domestic criminal law. But the left has legitimized terrorism when it is directed against bourgeois society. That is the key to their moral perversion. That is also why Obama does not object to terrorism “as such.” If he cared about Islamist terrorism in Syria, Iran, Saudi Arabia, and all the rest, he would also have to reject the Mau Mau terrorism that brought his dreamed-of father to power in Kenya. (Jomo Kenyatta quickly kicked him out of the post-colonial government.) In any case, Obama and the indoctrinated network that now controls the United States government consider terrorism “in a good cause” justifiable – which is why they do not mind 9/11/01 and the whole rise of jihad terrorism in the last forty years. If anything, the hard left wing of our foreign policy establishment is full of excuses for clear crimes against humanity.

So far, Obama has shown utter contempt for the U.S. Constitution, for our military, and for the crucial duties of the Department of Justice, the Border Patrol, and the IRS. The hard left at the core of the Democratic Party is essentially Obamanist, as expressed by Rep. Joe Garcia.

The real problem is therefore not a single human being called Obama, but an entire political apparatus that turns out Obamas like robots. Hillary is an Alinsky acolyte, and Alinsky was simply another revolutionary agitator – now called “community organizer” by our party-line press. Alinsky’s biggest innovation was to make common cause with organized crime in Chicago.

Starting with the Arab oil embargo of the 1970s, radical Muslims joined the Alinsky axis to make the toxic triangle of revolution, criminal mafias, and reactionary Islamism.

The historian Bat Ye’or wrote in her book, Eurabia:

[Beginning in 1973,] the combination of a powerful Eurabian lobby with … European political, media, and educational systems produced throughout the EU that uniform political thinking known as “political correctness”… Dissenters were harshly censured in universities, books, and the media.

Exactly the same media-political fear regime was implemented in the United States. These events were not coincidental. In many cases, we know exactly which politicians and media empires were bought by Gulf oil dollars. Starting with the Clintons, we have seen state mafias gain national power – first the Dixie Mafia, and now the Chicago Machine. Obama is simply the logical outcome of forty years of indoctrination in our politics, education, and media.

We can now see these toxic forces converging in the purposeful sabotage of our southern border. The Sinaloa cartel is the biggest drug cartel in Chicago, and it received weapons from our DOJ during the “Fast and Furious” smuggling program. Valerie Jarrett met with “immigration activists” (like La Raza) in the weeks before the assault on our border. Iran’s terrorist arm Hezb’allah has agents colluding with drug mafias and people smuggling all over South America. Breaking down our southern borders serves all three.

It’s impossible to know where Obama has done the most damage – at home or abroad. The Middle East is now breaking down into that much-feared regional war, with Russia, Syria, Iran, Turkey, and Iraq converging on the Saudi- and Qatar-supported murder gangs of ISIS and ISIL, which now number in the tens of thousands. To add to the turmoil, the United States has helped to supply and train AQ barbarians in Jordan and Turkey, to join their bloodstained brothers wherever they decide to strike next.

All these bloody disasters can be attributed to U.S. and European policies in support of Islamofascist radicals. Jimmy Carter allowed Ayatollah Khomeini to take power in Iran, which is now within weeks of possessing a nuclear bomb. Western politicians like Jacques Chirac enabled Saddam Hussein in Europe and the U.N., leading directly to suicidal immigration flows of millions of Muslims from the badlands of Pakistan to all the capitals of Europe. The EU supported the Turkish Islamofascist party of Recip Erdoğan, now fighting the Turkish Salafist party. The Clintons failed to pursue Osama bin Laden after the first World Trade Center bombing in New York in 1993. Major money flows have been going from the ultra-radical Muslim Brotherhood to the Carter and Clinton centers.

But it took Obama to betray Egypt’s Mubarak, the single greatest pillar of peace in the Middle East for four decades. It was Obama who overthrew Gaddafi, and dissolved Libya into a bloody civil war that still continues. It was Obama who directed Ambassador Stevens to smuggle vast quantities of Libyan arms to the Syrian rebels, including the worst of the worst, the Al Nusrah gang, which killed children in the Christian village of Ma’aloula. It was Obama who supported the rise of the MBs in Egypt – the very people who assassinated Anwar Sadat forty years ago for making peace with Israel. Today, it is Obama who is preparing to surrender Afghanistan to the woman-hating Taliban, and who is refusing to help our U.S.-promoted Baghdad government to ward off the latest assault by primitive savages.

(Baghdad is now getting jet planes from Russia and an invading army from Iran and Syria, whose loyalties nobody knows. But they sure don’t like us.)

In sum, Obama has presided over the most malignant foreign policy in U.S. history.

This is not an accident. This policy was planned and executed by radical leftists like Susan Rice and Valerie Jarrett, corrupt media barons like the New York Times, and Islamofascists like John Brennan. They include the same Big Media corporations that control our “mainstream” media. They also include famous Silicon Valley high-tech companies like Apple and Google, who support Obama’s Progressive Policy Institute, and George Soros, who supports the anti-Israel front group J Street. Google’s vice president for North African sales was indeed directly involved in agitating for the Arab Spring, which our media simultaneously discovered and headlined, only to lead to Muslim Brotherhood despotism in Egypt.

It is very hard to know if we will come out of this mad state of affairs intact. America has teetered on the edge of Marxist disaster once before in its history, during the FDR and Truman years, when the fruits of the Manhattan Project were instantly transmitted to Stalin in Moscow, who was able to explode his own copycat bomb as early as 1949. Leftist betrayal is not new, nor is it unusual.

If you believe delusionally that the “bourgeois” nation-state is the enemy of all that is good and decent, and that destroying it will bring about utopia, smuggling nuclear secrets to Jozef Stalin becomes a great gift to humanity. Once you accept delusional cult beliefs, the end simply justifies the means. And delusional cults are a dime a dozen in human history.

As the Wall Street Journal wrote this week:

The American image has been tarnished by the progressives who took control of the U.S. government in 2009. They set about to expand the state’s power, which was exactly what had destroyed the productive drive and creative skills of the post-World War II Russians and Chinese. They made a hash of health insurance, grossly distorted finance and destroyed personal savings by manipulation of the credit markets. They conducted a war on fossil fuels, handing a victory to Russia, which uses its hydrocarbon exports to exercise political influence in Europe. They weakened the dollar by running up huge national debts and wasted the nation’s substance on silly projects like “fighting global warming.”

Obama’s mentors shared a bitter hatred for middle-class values, starting with his mother and father, followed by his Muslim madrassa teachers in Jakarta, then Frank Marshall Davis in Hawaii, on and on, culminating in Jerry Wright, who calls our culture of freedom and productive work “middleclassness” – a direct translation of Marx’s “bourgeoisie,” the enemy that must be destroyed.

What is different about the Obama left is not the basic doctrine of revolutionary destruction. What’s different is the new alliance between the radical left and jihadist Islam. According to Bat Ye’or, that alliance goes back to the 1970s, after the Arab oil embargo, when Wahhabi and Khomeinist Muslims started to buy politicians by the barrel in Europe and America. Obama is the culmination of decades of Muslim influence-buying, which now controls much of our media, politics, and educational system.

Today, we are seeing that alliance emerge in the Muslim world, where the Western left has consistently supported murderous jihadist movements and regimes.

Obama has supported mass-killing regimes in the Middle East against more moderate, stabilizing rulers: Mubarak, Gaddafi (much better than today’s civil war in Libya), Maliki (ditto for Iraq), Karzai (ditto for Afghanistan). Instead, Obama consistently favors al-Qaeda-linked killer gangs in Syria and the biggest sponsor of terrorism, Iran. His treatment of our longtime allies has been atrocious. Betrayal is his middle name.

The hokey “spontaneous” immigrant wave of children and criminals is just another example of hard-left agitprop – in this case culminating in massive, deliberate child endangerment and probable abuse.

Obama’s self-appointed mission in life is to destroy the most productive and beneficial culture in history. Obama personally taught Alinsky’s Rules to his ACORN followers, and Alinsky called us “the enemy.” That word is used in war, and radicals like Obama and Malcolm X are bitter warlike agitators. (The old word for “community organizer” was “communist agitator”). Radicals like Obama read their revolutionary heroes literally, just like any Bible-quoting fundamentalist preacher.

The civilized world has a great ability to recover from disaster, as it showed three times in the last century. But each time the resistance has had to be led by those who tell the truth. Sane and sensible people today cannot rely on our twisted media, and we cannot believe our broken politicians. We have new web technologies at our fingertips that allow us to throw out the bums – be they RINOs, leftist radicals, or Islamofascists. Eventually our confused voters will figure it out – but don’t expect other people to make it happen.

Everything depends on telling the truth, and you and I must take full responsibility for doing so. Nobody else will do it for us.