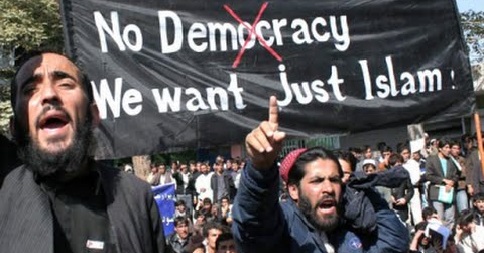 Western Europe’s long, slow suicide is too long and slow for Western European elites, apparently. You know, the self-loathing, Western-loathing progressive-minded sorts. Projections of Muslim supremacy in Europe by the latter part of the 21st Century means that Europe’s enlightened class won’t experience the pleasure of watching Muslims hoist guidons emblazoned with the shahada and the takbir over the Vatican. Quite a visual, won’t it be, compliments of Al Jazeera, having a muckety-muck imam emerge on the once papal balcony — a balcony festooned with a boldly oversized crescent moon and star flag — to bestow blessings on masses of believers shouting, “Allah Akbar,” as a global audience watches enthralled.

Thus the intent to hasten Europe’s demise — that is, whatever remains of degraded Christian Europe and Western Civilization there. Muslim ascendency has its satisfactions, but nothing beats witnessing the coup de grâce, the final scimitar coming down on the neck of once mighty Europe. That’s what open borders means — it’s a quickening of the suicide. It gives an outside chance for Western Europe’s elites to witness the dénouement of their crimes (perhaps they would prefer the kinder, gentler word, “designs”).

Muslims, being fervently (or fanatically) religious and morally and culturally dark-aged, might discomfit Europe’s godless statists, whose tastes run more toward a nihilist flavor for Europe’s end. But a Hitlerian Weltuntergang could be awfully messy and complicate the elites’ escape, to the good old U.S.A. or wherever else the Mohammedans haven’t — yet — gotten a grip.

To date, Western Europeans — principally the Germans and French, though the Brits, among others, are catching up — are accelerating the importation of Muslims from war-torn lands on the south and east side of the Mediterranean. It isn’t an invasion, but a mass migration with evident benefit to building Muslim hegemony in Western Europe. Yes, “hijra” now enters the Western lexicon, along with “jihad.” Hijra is subjugation and conquest by an exotic name. One culture’s refugee is another culture’s — and faith’s — warrior-migrant.

There are the stirrings of revolt — an awakening — among Europeans, however. Hungary, in a fit of sanity, has sealed its borders to Muslim migrants. (Budapest might be where the pope flees one day.) Ordinary Germans are in the streets protesting. Others across Europe, too. But with an estimated 20 million Muslims in Western Europe, what possibly can be done to reverse the Muslim tide? What can be done to change Western Europe’s fortunes?

The Muslim newcomers join millions of their brethren who’ve called Europe home for as much as a couple of generations. Many came to fill Western Europe’s need for cheap labor (heck, any labor, since post-everything Europeans enjoy shortened work hours, summer respites, and subsidized lives. Breaking sweats is for wogs, anyway).

Most Muslims, whether of long duration in Western Europe or “native” born, are unassimilated. True, homogeneous Germans, French, and Swedes have never cottoned to foreigners. But Muslims aren’t hep about being included, either. Islam, being about conquest, it’s infidels who must submit or die. The menu for infidels is two columns: convert to the faith or accept the brutality and squalor of dhimmitude.

The new waves of Mohammed’s minions entering Europe do so to the blathering, idiotic rationalizations of Angela Merkel, most conspicuously.

Frau Merkel spouts unctuous pieties about the need for compassion and humanitarian outreach to hundreds of thousands of Muslims expected to cross Germany’s borders. Did we say that Europe’s elites are insular and inbred? Those among the crème de la crème who aren’t pining for annihilation live as detachedly from hard — actually, ugly — realities. Merkel’s suggestions that accommodations are possible for Muslim entrants betray a conceit: that superior Germans will gladly condescend to minister to the unwashed, prayer rug-toting Mohammedans, taming them. Failure to reverse this soggy reasoning will prove a fatal conceit. But fatal the conceit may already be.

Merkel is no Bismarck. No nationalist. No “Iron Chancellor.” No hard-eyed realist. The linsensuppe that sloshes around between Merkel’s ears permits no realpolitik.

What could a modern Bismarck do to save Western Europe from its folly? The obvious answer is expulsion — mass expulsion of Muslims from Western European soil. If one thinks the term expulsion too harsh, use “repatriation.”

A policy of expulsion conjures up the dark old days of persecutions and pogroms, which abound in Europe’s history. For some Americans, it’s the Trail of Tears all over again (save that Muslims aren’t Western Europe’s “indigenous” people). The recoil is understandable.

Anthony Carr, at Australia’s Quadrant, offers this insight as to why Western European elites will never expel the Muslims in their midst, much less stem the flow of migrants in any coordinated, systemic fashion over time. Wrote Carr on September 22 of this year:

Educational institutions and much of the media throughout the Anglosphere now spread the message that Europe’s record in relation to the rest of the world is one of racism, xenophobia and oppression — the Australian story, for example, being one of exploitation, cruelty and dispossession. How can a people, so unworthy, with faith in neither God nor themselves, resist a people whose religion insists they should have primacy, that they are entitled to what they seek as of right?

Europe’s elites lack the conviction and will to take remedial — even draconian — actions to rescue their countries and civilization. These nihilists embrace suicide at the hands of millions among them who practice a barbarous faith… who move toward conquest with humble certitude in Allah and Mohammed.

But there are whole swaths among Europe’s indigenous peoples — now and in the years to come — who aren’t kindly disposed to submitting to Salāt. Who, in a not too distant future, not having converted to the faith, will mightily resent their sisters and daughters being used by jihadists as bed buddies.

Don’t expect Islam’s rise in Western Europe to go smoothly. The cheery scene at the Vatican with the imam may transpire only after a long period of dystopia. Strife and civil wars could well erupt between Muslims and the redoubtable native lumpenproletariat.

This again from Anthony Carr. Carr may underestimate the pace of deterioration in Western Europe, thinking that it’s our descendants and not us who will witness the inevitable convulsions there. But he does hint at the horror to come:

History has shown that the Europeans are capable of anything and with the collapse of the European project we can expect new leaders to emerge from the ruins, many of whom will not be nice. There will be new Nazis, new Communists. New Identities, loyalties and borders will be established. Our descendants will live in interesting times!

Live in interesting times, indeed. Or living more on the order of Brando’s Kurtz in Apocalypse Now, living “The horror.”

Suisan Read more about the evil of Islam by clicking on the below website link.