Home Ignorant Fools For The West To Live, Equality Must Die

For The West To Live, Equality Must Die 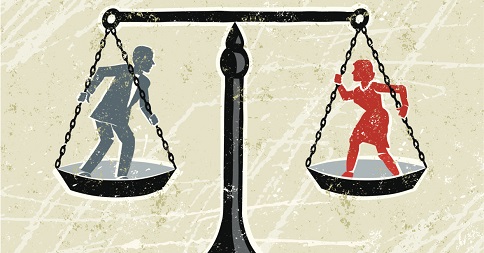 Equality is the chief faux virtue of our time. Our obsession with it brings to mind the great G.K. Chesterton’s observation, “The business of Progressives is to go on making mistakes. The business of Conservatives is to prevent mistakes from being corrected.”

Long ago the West erred by exalting “equality” at, ultimately, quality’s — and sanity’s — expense. In fact, it’s at a point where boys claiming girlhood are allowed in girls’ bathrooms and locker areas based on equality dogma. How do we correct this mistake? First, stop being connedservative and realize that few people have pondered equality deeply and that, of those who have, few actually believe in it.

Let’s start with what most already reject: seeking equality of outcome. We so often hear, for example, that growing income disparities must be eliminated. Not only does this imply big-government redistributionism, but does “inequality” actually tell us anything relevant?

Consider: Imagine two tennis centers training children. After a given period, all the kids at the first are advanced beginners. At the second, there are some advanced beginners, a large group comprising varied intermediates, a decent-size set of advanced players and a few approaching tournament caliber. Which center exhibits more equality?

Now, at which are the kids faring far better on average?

This absolutely reflects the “income gaps” reality. The rich are getting richer — but so are most others. As even left-wing Think Progress reported in 2013, the current standard of living worldwide is history’s highest. Thank the spread of the market-economy meritocratic system.

Examining our related Diversity obsession, is there one endeavor that equal group representation would improve? Would the NBA, NFL, MLB, or NHL be better being 50 percent female and reflecting the wider population’s racial/ethnic composition?

Then, Jews are less than one percent of the world’s population but constitute 20 percent of its Nobel Laureates, and most great scientists are men. Would intellectual endeavors be improved by enforcing proportional group representation?

Lesson: Equality tells us nothing about quality.

“But we must have equality under the law,” the connedservative will say. Really? Because we don’t have it — and never have.

Then, only men must register for selective service; if there’s a major war, only men will have to make the ultimate sacrifice.

This is easily remedied? That’s not the point. Many of us understand why the sexes have always been, and should be, treated differently by government (though men deserve benefits, too, but that’s another topic). So, in reality, do we actually believe in true “equality under the law”?

This is related to the above, and we already know how minors don’t have equal opportunity. But what of women? If in the military, should they be allowed in every role, including front-line-combat and submarine service? For insight, ponder the pregnancy rate aboard navy vessels, often dubbed “love boats.”

Then there’s how females are sometimes allowed entry into males’ sports; ex-golfer Annika Sorenstam receiving a sponsor’s exemption (i.e., she didn’t earn her spot) to play in the 2003 Colonial PGA tournament is an example. Yet that this is considered fair even though males traditionally aren’t allowed in females’ athletics (“transgender” issue aside) not only violates the “equal opportunity” pseudo-principle, but reflects a tacit acknowledgment of inequality. To wit: boys and men are better at sports — ergo, this New Chivalry double standard.

Unequal opportunity’s legitimacy becomes clearer when further considering the private/social sphere and its social laws and economic imperatives. Would it be odd if men didn’t have equal opportunities to become daycare workers? What if West Indian, Japanese, and German restaurants only wanted, respectively, black, Asian and white employees because they lend business-buttressing authenticity? There’s also how bars only hire male bouncers and countless other examples.

Yet the equality lie is best illustrated by its proponents. Consider: despite sanctimonious talk about “glass ceilings” disadvantaging females, within “the feminist grievance narrative, there is no whining about women being ‘excluded’ from working-class male-dominated professions,” American Thinker’s Katie El-Diwany wrote last month. “There is more than plenty of talk about the dearth of women in science, in engineering, in upper management positions, and as CEOs. But there is no one asking: where are all the female garbage-collectors, the female elevator technicians, the female landscape laborers, the female oil rig workers?”

That their rarity approaches unicorn status is why men constitute 92 percent of workplace deaths, another unequal outcome seldom addressed. There’s also the intersex wage-gap controversy, which persists despite conclusive evidence that women earn less because of their different career choices, not discrimination. Nonetheless, while we hear incessant complaints about women’s lower pay in sports, acting, or elsewhere — a market-forces-driven phenomenon — there’s nary a word regarding how female fashion models greatly outearn their male counterparts.

As El-Diwany concludes, “All of this reveals that feminist clamoring for ‘equal representation’ is not about equality at all. It is about power and prestige.”

In truth, “equality’” today has the same kind of meaning “peace,” “freedom” and “strength” did in Orwell’s 1984 dystopia. It’s ploy not principle, self-righteously deployed as rallying cry to gain advantage and further a politically correct brand of inequality.

Equality dogma has also invited statist hell. For if all groups are equal in worldly capacities, as the dogma holds, then inter-group performance differences must result from discrimination. This justifies social engineering as “remedy”; ergo, quotas, affirmative action, set-asides and disparate-impact rulings that destroy relevant merit-based standards.

Yet it gets worse. One reason equality-based groups — the “Reign of Terror” French revolutionaries and mass-murdering Marxists — have bled the ground red is simple:

Does it exist in nature? Some species are more dominant within the same environment or survive more readily within a given one. Within the same species, some members are larger, hardier, stronger or faster. Moreover, hierarchies reign. Examples: one lion rules the pride and one silverback gorilla the troop — and chickens really do have a pecking order.

Is man this rule’s one exception? In reality, human conception involves essentially an infinite number of possible combinations, individual talents and gifts vary greatly, and even groups have characteristic strengths and weaknesses.

Thus, equality-obsessed movements are contrary to nature — they fight and must try to defeat it (e.g., Lysenkoism). Imagine the intrusive, perverted control required to (vainly) try to achieve equality in a lion pride or gorilla troop. In man’s civilization such schemes beget bizarre social engineering, meritocracy’s destruction, suppression of the successful, oppression and, when applied zealously enough, the Khmer Rouge killing fields.

Yet seeing no option, people can’t imagine shedding equality dogma. “Without equality as guide,” the thinking goes, “how is unjust discrimination avoidable?” First note that this occurs in “equality’s” name, too (e.g., quotas). But this gets at why equality is a faux virtue: We’ve forgotten the real ones.

“Virtues” are morality’s elements; defined long ago, examples are charity, honesty, diligence, courage, humility and temperance. Equality tells us nothing relevant about, let’s say, why blacks but not women should be on navy submarines or illegal-alien caravans should be denied entry; equality dogma, per se, is insufficient for drawing distinctions. But the virtues — in particular, justice and prudence in the latter case and those two along with chastity in the former — do thus help inform. Of course, all the virtues must be accepted and applied because they balance each other out.

To cement the point, consider equality arguments’ fruits: boys in girls’ bathrooms, women in formerly men’s institutions (VMI) and men in women’s sports (“transgenders”), the sexual-devolutionary agenda in schools, LGBTQ “rights” and Drag Queen Story Hour, claims that Muslim immigrants can’t be denied entry, the 1965 immigration act-born demographic upheaval, same-sex “marriage,” the Boy Scouts becoming “Gender-neutral” scouts, coercing businessmen into servicing homosexual events, Satanic “Christmas” displays and countless other trespasses. In Sweden, a multiple-sclerosis patient was even denied possibly restorative drug treatment — that he was willing to finance himself — because it would violate the “equal access to medicine” principle.

How’s that “equality” workin’ for ya’?

None of these outrages would or could occur in a virtue-oriented civilization. Just as accepting scientific principles renders impossible pseudo-science such as alchemy, trephination, and bloodletting, knowing and accepting moral principles (virtues) render impossible the pseudo-morality called political correctness — and all its manifestations.

There’s a reason equality was never defined a virtue. A modern mistake, its emphasis was born of the so-called “Enlightenment,” thus named, mind you, by those within the movement (hmm, people fancying themselves more “enlightened” than everyone else. Remind you of anyone?). The radical leftist French revolutionaries had their cry, “Liberté, égalité, stupidité” (okay, that’s a paraphrase). Our Founding Fathers also emphasized equality; of course, they’d recoil at its current perverse manifestations. Yet they nonetheless erred, a result of a (very human) overreaction to European classism. Far better, and truer, than “All men are created equal…” would be “All men are created sacred.” Then, subsequently, the 19th-century socialists picked up and ran with the equality ball — and the rest is dark history.

Exalting equality is another example of conservatives conserving yesterday’s liberals’ liberalism, playing the caboose to their engine of entropic end-times change. But what once was “progressives’” mistake is now ours, and, if the West is to survive, we must stop preventing that mistake from being corrected.