How The Church Is Being Undermined From Within 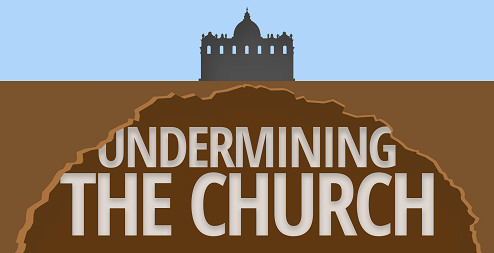 In 2006, at the University of Regensburg in Germany, Pope Benedict XVI gave a historic speech on faith and reason that included reflections on Islamic ideology. Quoting a medieval scholar who condemned conversion by force, or jihad, Benedict characterized Allah as transcendental and above rationality. The quote called Muhammad’s new ideas “things only evil and inhuman.”

Not surprisingly, the pope received death threats afterward and was called the “pig servant of the cross” and other derogatory epithets. Muslims protested in the streets worldwide and demanded an apology. Five churches were firebombed in the West Bank and Gaza, an Italian nun was shot dead in Somalia, a priest was beheaded in Iraq, and two Christians were stabbed and killed in Baghdad. Many feared that even more violence would erupt. Following the carnage and intense pressure, Pope Benedict yielded to the Islamists and capitulated.

Since that time, the Vatican’s agenda has been to reach an accommodation with Islam, to resist any condemnation of jihadist ideology, to promote the “progressive enculturation of Islam in Europe,” and to “engage in interreligious dialogue.” The pope went so far in his apologia as to meet with Muslim diplomats and ambassadors, including Tariq Ramadan, grandson of Hassan al-Banna, founder of the Muslim Brotherhood (M.B.). This occurred despite widespread persecution and attacks against Christians in Muslim countries by Muslim Brotherhood-affiliated terrorist groups, and at a time in which Christianity is being extirpated from the region.

One year after Pope Benedict’s address, in what appeared to be a gesture of reconciliation, a group of Muslim scholars and clerics invited Christians to come together to endorse the document, “A Common Word Between Us and You,” an open letter to Christian leaders emphasizing similarities between the two faiths. Initially, 300 Christian leaders across the world approved “Common Word” and received the document with enthusiasm.

A response prepared by the Yale Center for Faith and Culture extended “our own Christian hand in return so that together with all other human beings we may live in peace and justice as we seek to love God and our neighbors.” The Christian letter of response apologized for the past – the Crusades (in reality an effort to regain conquered Christian land) and the present-day “excesses” of the “war on terror.” It also identified Muhammad as a prophet and went on to ask forgiveness for sinning against the worldwide Muslim community. The letter continued with a validation of the common ground between the two faiths cited by “A Common Word Between Us and You,” specifically “love of God” and “love of neighbor” and agreed these similarities to “be the basis of all interfaith dialogue between us” for the sake of peace in this world and “our eternal souls.”

In their book, The Common Word: The Undermining of the Church, Sam Solomon, a Muslim apostate, devout Christian, and scholar of Islam, and Elias Al Maqdisi, an expert on Islamic teachings, expose the true meaning and spirit of “Common Word.” They contend that the message is “accept Islam or face the consequences,” rather than a paean of “unity” or the “oneness” of God. Noteworthy is that the document lacked any apology for Islamic invasions and conquests or invitations to build churches in Islamic lands.

The authors point out that, despite the seeming message of peace in the document, sharia law mandates that Muslims are not allowed to enter into peace agreements with non-Muslims or forgo their obligation to perform jihad. They also state that whereas Judaism and Christianity teach, “love of one’s neighbor as one’s self,” Islam teaches followers to have enmity toward Jews and Christians as set forth in the Islamic doctrine of Al Wala Wa al Baraa, or Loyalty and Enmity. Mainstream Islam advocates the separation of Muslims from non-Muslims, who are viewed as “unclean.” Quran 58:22 states that devout Muslims do not befriend non-Muslims “even if they be their fathers, sons, brothers, or kin.”

Further quotations from the Quran cited by the authors include Quran 60:4, which proclaims, “Enmity and hate shall forever reign between us – until you believe in Allah alone.” In fact, the first sura or chapter of the Quran, Al Fatiha or “Opening,” recited at each prayer time for a total of 17 times daily, is a call to follow the “straight path” of Islam and not to follow the path “of those who have evoked Allah’s anger,” or the Jews, and those who have gone “astray,” or the Christians.

As for the “loyalty” part of Al Wala Wa al Baraa, Muslims are obligated to befriend and aid fellow believers, the authors note. Therefore, “love” is doctrinally permitted only toward fellow Muslims. Also problematic is the doctrine of taqiyya, which requires Muslims to lie to and deceive infidels, implying that hostility is ever present despite the pretense of “coming together.” Central to Islamic ideology is that the Quran is the last of the holy books to be revealed and abrogates everything that came before it, as proclaimed in the Shahada or the Muslim prayer of affirmation: “There is no God but Allah and Mohammed is his messenger.”

Solomon and Maqdisi sum up the “Common Word” as part and parcel of the “civilizational jihad” and an expedient attempt to make Islam look peaceful with elements in common with Christianity.

With the appointment of Pope Francis in 2013, the Church intensified its portrayal of Islam as “a religion of peace” as well as its dissembling about the motivating ideology of jihad terrorism. An Islamist leader even thanked Francis for defending Islam against accusations of violence. The pope has warned that limits exist to freedom of expression and, in blatant denial of Muslim terrorism, claims instead that all religions have their violent individuals. Rather than serving as a defender of Christianity, he has enabled and abetted the persecution of Christians.

Disturbingly, some top evangelical Christian leaders in America have spurred the encroachment of Islam and thereby failed to warn their congregants about the threat they face from Islamic ideology. One example, Pastor Rick Warren of Saddleback Church, which averages 20,000 weekly attendees, spoke at the Hamas and Muslim Brotherhood-linked Islamic Society of North America Annual Convention in 2009 alongside unindicted co-conspirator in the 1993 World Trade Center attack Siraj Wahhaj, Hezb’allah supporter Maher Hathout, and violent jihad advocate Esam Omeish. Warren, a major promoter of interfaith unity, proclaimed, “We need to work together.” In addition to legitimating a Muslim Brotherhood entity by his presence, he was a signatory to “‘A Common Word’ Christian Response,” supporting the contention that Muslims and Christian serve the same God. Warren later issued a denial: “Christians have a fundamentally different view of God than Muslims. We worship Jesus as God. Muslims don’t. Our God is Jesus, not Allah.”

Pastor Bob Roberts of Northwood Church in Texas, another mega-church, has hosted an interfaith forum, the Global Faith Forum, where Muslim Brotherhood operatives have been invited to speak. Roberts has been associated with Mohamed Magid, the imam of the sharia-supremacist ADAMS mosque and former president of the Islamic Society of North America, found to be associated with Hamas in a federal trial in 2008. Additionally, he has collaborated with Sheikh Abdallah bin Bayyah, an anti-Israel cleric who openly states on his website that Christians are going to hell and authorized the killing of Americans in Iraq with a fatwa issued in 2004.

Earlier this year, 400 faith leaders met in Washington at the National Prayer Breakfast to forge ties between Muslims and Christians in which M.B. operative Mohamed Magid and Bin Bayyah participated. It is unconscionable that this convocation was not perceived as it actually was: a threat to national security by those who wish to destroy Western civilization and force sharia submission.

Whether wittingly or unwittingly, these Christian leaders are complicit in the drive to mainstream Islam worldwide. They are placing Christians, already imperiled throughout the world, at great risk by reaching out to practitioners of an extremist ideology that seeks to convert or annihilate anyone who refuses to accept its supremacy. As Solomon and Al Maqdisi point out in their book, Christians are being deceived about the true intent of Muslims who hold enmity and no love at all toward anyone not a fellow Muslim.

Written by By Janet Levy.