Home Christian Political News I am first A Biblical Christian, and then because of that I am a Constitutional Conservative

I am first A Biblical Christian, and then because of that I am a Constitutional Conservative 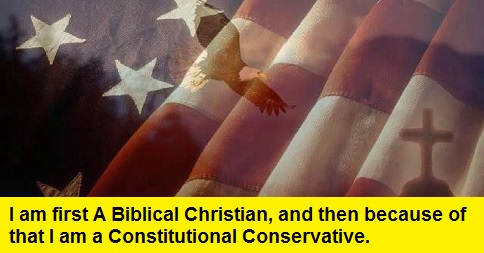 As stated in my introductory thread I am first A Biblical-Christian, and then because of that I am a Constitutional-Conservative.

Here’s a little back-story to explain.

My dad, now deceased (died December 7th, 2015), was a Southern Baptist minister and home missionary, and a fine Christian man. My mother is (still living) a fine Christian woman. Both prayed, and had daily devotions together, and with us five kids growing up. We were brought up old’ school, Conservative, Hell-fire Baptists, and as solid Conservatives, my dad’s middle name was Coolidge.

I though began to be bored with church, God, The Bible, and The Lord Jesus at about nine years of age. I wanted to play, to do, to go…anything but what I thought was “boring religion”. By age 12 was already mad, very mad. We moved a lot, and as a PK I always had to be good…and I resented that very much. Also my dad took pastorate in a church in 1968 that had mostly hypocrites in each leadership position, that with my wanting to have “fun” instead of being good brought me to the place in my life at 12 years of age where I cursed God with horrid profanities, told God I hated HIM, hated Jesus, Church, Christians and Christianity and then told God that HE and all of them could go to Hell. From age 12 I began smoking four packs a day, drinking (had older “friends”), cursing, vandalizing, stealing, getting into fights daily, got into porn, and by age 14 acquired “The Satanic Bible”, and other occultist books on everything from EST, to Scientology, to Wiccan Witchcraft, but mainly Satanism. I was going to hurt everyone who had wronged me and hurt them bad (so I thought), and that included God.

BUT GOD had other plans for me and my life.

In 1976 we had moved yet again and ended up in Needles, California. I had made plans to go back to my hometown of Hannibal, Missouri and NOW was the time that all the people that had hurt me, my dad an d my family were all going to pay. I had already planned and committed to burning down their homes and the church… BUT GOD… I had told no one my plans, not even my closest friend who was as big a rebel as I was…but when I got of the train August 14th, 1976 and all the hellos and hugs were said my best friend and dad said we were going to revival that night. WHAT?!! I had other plans. Revenge. Hatred. Retribution. NOT revival! NOT church!

BUT GOD set this up to catch me off guard. I went to the revival. It was an old-fashioned, Pentecostal tent revival. The Reverend Ronnie Dean McRaven drove nails that night. The Holy Spirit (who I knew little about then) was deeply moving upon my heart, and 3 hours later, and 10:30 pm, August 14th, 1976 I gave my heart, life and soul completely to The Lord Jesus Christ. I took the pack of Camels out of my pocket, threw them in the sawdust and crushed them under my feet…and never looked back. Through The Lord Jesus Christ I was now a new creature, old things passed away, and all things were made (by Jesus) new, II Corinthians 5:17-21. I was and am 100% changed- not perfect, then or now…but changed.

I noticed that the transformation Christ Jesus made in my heart also changed my world-view 100%. I was no longer the reckless, hedonistic, rebel against everyone and everything Liberal…Christ through HIS saving me, and through daily prayer and Bible studying was changing me entirely.

I had as a Junior in HS Civics supported welfare and many entitlements, and even supported outright tyranny “for the good of the people”. But I was beginning to see that it IS the family and then the church that is supposed to take care of their own who needed it, but that if a person could work and would not they should not eat. Instead of a state mandated tyranny “for our own good” I was seeing that God promoted liberty, freedom, the rule of law, personal responsibility and accountability. On and on the transformation went.

The first time I got to vote was to vote for Ronald Wilson Reagan in 1980 for President of The United States of America.

THE NATIONAL RIGHT TO LIFE

THE NATIONAL ORGANISATION FOR MARRIAGE

and now, THE TEA PARTY.

But the ONLY one I follow without reservation is The Lord Jesus Christ.

Along the way as The Lord helped me grow inn HIS Word, there have been some I’ve parted ways with. I once followed Phyllis Schlafly and Eagle Forum and Rush Limbaugh…but the more they supported and defended Trump who is a profanity-laden, proud serial adulterer, who habitually lies, cheats and commits fraud, bribery, slander and libel, and IS Liberal, I dropped them immediately. No one can go in two opposing directions at the same time. They, and others, want to be touted as “Conservative Heroes”, and “Christians”…all while supporting the most vain, vile, depraved liar to ever run as a Republican! I can’t go in two opposing directions at the same time either…they left Conservatism so I left them.

My Number 1 Goal, my Number 1 Purpose, is to study, learn, follow, love and live according to God’s Word, and by HIS grace be more like HIS ONLY Begotten Son, The Lord Jesus Christ.

I still after almost 40 years have a long way to grow and much to learn, but my eye and my heart is on The Prize.

where can i buy cytotec without prescriptions The State of America.

To get an accurate diagnosis of the “health” of America we must:

1.first see what we were,
2.the long, slow, but steady decline,
3.and where we are now,

Where we came from.

Our decline, brought to us by The Democrat Party, began in 1814. Of course, back then Christian influence was stronger than it is now, and The Declaration of Independence, Federalist Papers, The Constitution, and The Bill of Rights (I include the 11th Amendment as well) were held in much higher regard than now…but even then The Democrat Party was THE Party FOR slavery. And it got worse from there.

In 1913 a Democrat President and racist, Woodrow Wilson, set up the IRS, The Federal Reserve and the Income Tax…ALL contrary to Constitution and ALL supported by The Marxist Manifesto to Destroy America.

Then with Herbert Hoover, FDR, Truman and LBJ, Nixon (R.I.N.O.), Carter we got a steady diet of Marxism force fed us: welfare, WIC, The EPA, both NEAs, The Dept. of Education, the BLM, HUD…and, now, ObaMarxist-Care.

1972- one, bitter, angry, manipulated Leftist woman got abortion on demand legal, and since the there have been between 67-70 MILLION INNOCENT, HUMAN BABIES MURDERED.

1979- one, moronic, Marxist President, Democrat Jimmy Carter, foisted on us the Marxist monolith known as The Department of Education. Now OUR children are force-fed Marxism via OBE and Common-Core. It is no wonder that those “educated” in our tax funded public schools are to deaf, blind and ignorant to know any better than to choose, fund and vote for Socialists, Liars, Cheats, Frauds and Egotistical Tyrants! Just look at how well three Socialists are doing in AMERICAN elections, Sanders, Hillary, and Trump!! We HAVE a bona fide Constitutional-Conservative Warrior who has been tried by fire, and who is also a solid, Biblical-Christian, a faithful family man, a man of honesty and integrity in Ted Cruz…but because Cruz is NOT promising the world, bribing and bullying anyone he is LOSING in today’s America!

After all we’ve suffered since 1913, especially since 2008, we have enough citizenry so ignorant of where America came from and what America used to be that three candidates that America’s Founders would have hung for treason are leading in the polls!!

It is not that I believe America can’t be saved…we could be if we returned to Constitutional-Governance and The God of Our Fathers… it is not a matter of “can”, but “WILL”…I do NOT think we will return to what made America good and great because too many people, even people who say they’re Conservative hold to principles and values more in keeping with liberals, socialism and communism than the United States Constitution.

We could…if ALL of the people saying they’re Christians would PRAY, seek The Lord and vote according to God’s Word, the Bible… I just don’t think America any longer has the Will, the want to do so.

It’s has been a mostly good 240 years…but I see NO consorted effort by enough praying, like-minded people to reverse the course we’re on.

Ultimate, final and soon decline. America is going the way of the ancient Assyrian, Syrian, Greek and Roman empires…to the scrap heap…as are the rest of the nations. Setting the stage for- finally- the one world government led by THE Anti-Christ and THE False Prophet.