Jesus Died in a Police State 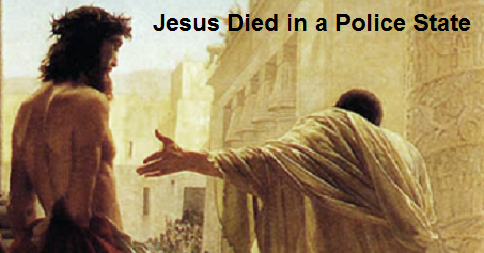 Puerto Cabello “If Jesus had been killed twenty years ago, Catholic school children would be wearing little electric chairs around their necks instead of crosses.” ― Lenny Bruce

If you buy into the version of Christianity Lite peddled by evangelical leaders such as Franklin Graham, who recently advised Americans to do as the Bible says and “submit to your leaders and those in authority,” then staying alive in the American police state depends largely on your ability to comply, submit, obey orders, respect authority and generally do whatever a cop tells you to do.

If, however, you’re one of those who prefers to model yourself after Jesus Christ himself—a radical nonconformist who challenged authority at every turn—rather than subscribe to the watered-down, corporatized, simplified, gentrified, sissified vision of a meek creature holding a lamb that most modern churches peddle, then you will understand better than most how relevant Jesus’ life and death are to those attempting to navigate the American police state.

Indeed, it is fitting, at a time when the nation is grappling with moral questions about how best to execute death row prisoners (by electric chair, lethal injection or shooting squad), whether police should be held responsible for shooting unarmed citizens (who posed no threat and complied with every order), and to what extent we allow the government to dictate, monitor and control every aspect of our lives (using Stingray devices, license plate readers, and all manner of surveillance technology), that we remember that Jesus Christ—the religious figure worshipped by Christians for his death on the cross and subsequent resurrection—died at the hands of a police state.

Those living through this present age of militarized police, SWAT team raids, police shootings of unarmed citizens, roadside strip searches, and invasive surveillance might feel as if these events are unprecedented. Yet while we in the United States may be experiencing a steady slide into a police state, we are neither the first nor the last nation to do so.

Although technology, politics and superpowers have changed over time, the characteristics of a police state and its reasons for being have remained the same: control, power and money. Indeed, as I point out in my book Battlefield America: The War on the American People, a police state extends far beyond the actions of law enforcement. In fact, a police state “is characterized by bureaucracy, secrecy, perpetual wars, a nation of suspects, militarization, surveillance, widespread police presence, and a citizenry with little recourse against police actions.”

Just as police states have arisen throughout history, there have also been individuals or groups of individuals who have risen up to challenge the injustices of their age. Nazi Germany had its Dietrich Bonhoeffer. The gulags of the Soviet Union were challenged by Aleksandr Solzhenitsyn. America had its color-coded system of racial segregation and warmongering called out for what it was, blatant discrimination and profiteering, by Martin Luther King Jr.

And then there was Jesus Christ, an itinerant preacher and revolutionary activist, who not only died challenging the police state of his day—namely, the Roman Empire—but provided a blueprint for civil disobedience that would be followed by those, religious and otherwise, who came after him. Yet for all the accolades poured out upon Jesus, little is said about the harsh realities of the police state in which he lived and its similarities to modern-day America, and yet they are striking.

Secrecy, surveillance and rule by the elite. As the chasm between the wealthy and poor grew wider in the Roman Empire, the ruling class and the wealthy class became synonymous, while the lower classes, increasingly deprived of their political freedoms, grew disinterested in the government and easily distracted by “bread and circuses.” Much like America today, with its lack of government transparency, overt domestic surveillance, and rule by the rich, the inner workings of the Roman Empire were shrouded in secrecy, while its leaders were constantly on the watch for any potential threats to its power. The resulting state-wide surveillance was primarily carried out by the military, which acted as investigators, enforcers, torturers, policemen, executioners and jailers. Today that role is fulfilled by increasingly militarized police forces across the country.

Widespread police presence. The Roman Empire used its military forces to maintain the “peace,” thereby establishing a police state that reached into all aspects of a citizen’s life. In this way, these military officers, used to address a broad range of routine problems and conflicts, enforced the will of the state. Today SWAT teams, comprised of local police and federal agents, are employed to carry out routine search warrants for minor crimes such as marijuana possession and credit card fraud.

Citizenry with little recourse against the police state. As the Roman Empire expanded, personal freedom and independence nearly vanished, as did any real sense of local governance and national consciousness. Similarly, in America today, citizens largely feel powerless, voiceless and unrepresented in the face of a power-hungry federal government. As states and localities are brought under direct control by federal agencies and regulations, a sense of learned helplessness grips the nation.

Perpetual wars and a military empire. Much like America today with its practice of policing the world, war and an over-arching militarist ethos provided the framework for the Roman Empire, which extended from the Italian peninsula to all over Southern, Western, and Eastern Europe, extending into North Africa and Western Asia as well. In addition to significant foreign threats, wars were waged against inchoate, unstructured and socially inferior foes.

Martial law. Eventually, Rome established a permanent military dictatorship that left the citizens at the mercy of an unreachable and oppressive totalitarian regime. In the absence of resources to establish civic police forces, the Romans relied increasingly on the military to intervene in all matters of conflict or upheaval in provinces, from small-scale scuffles to large-scale revolts. Not unlike police forces today, with their martial law training drills on American soil, militarized weapons and “shoot first, ask questions later” mindset, the Roman soldier had “the exercise of lethal force at his fingertips” with the potential of wreaking havoc on normal citizens’ lives.

A nation of suspects. Just as the American Empire looks upon its citizens as suspects to be tracked, surveilled and controlled, the Roman Empire looked upon all potential insubordinates, from the common thief to a full-fledged insurrectionist, as threats to its power. The insurrectionist was seen as directly challenging the Emperor. A “bandit,” or revolutionist, was seen as capable of overturning the empire, was always considered guilty and deserving of the most savage penalties, including capital punishment. Bandits were usually punished publicly and cruelly as a means of deterring others from challenging the power of the state. Jesus’ execution was one such public punishment.

Acts of civil disobedience by insurrectionists. Starting with his act of civil disobedience at the Jewish temple, the site of the administrative headquarters of the Sanhedrin, the supreme Jewish council, Jesus branded himself a political revolutionary. When Jesus “with the help of his disciples, blocks the entrance to the courtyard” and forbids “anyone carrying goods for sale or trade from entering the Temple,” he committed a blatantly criminal and seditious act, an act “that undoubtedly precipitated his arrest and execution.” Because the commercial events were sponsored by the religious hierarchy, which in turn was operated by consent of the Roman government, Jesus’ attack on the money chargers and traders can be seen as an attack on Rome itself, an unmistakable declaration of political and social independence from the Roman oppression.

Military-style arrests in the dead of night. Jesus’ arrest account testifies to the fact that the Romans perceived Him as a revolutionary. Eerily similar to today’s SWAT team raids, Jesus was arrested in the middle of the night, in secret, by a large, heavily armed fleet of soldiers. Rather than merely asking for Jesus when they came to arrest him, his pursuers collaborated beforehand with Judas. Acting as a government informant, Judas concocted a kiss as a secret identification marker, hinting that a level of deception and trickery must be used to obtain this seemingly “dangerous revolutionist’s” cooperation.

Torture and capital punishment. In Jesus’ day, religious preachers, self-proclaimed prophets and nonviolent protesters were not summarily arrested and executed. Indeed, the high priests and Roman governors normally allowed a protest, particularly a small-scale one, to run its course. However, government authorities were quick to dispose of leaders and movements that appeared to threaten the Roman Empire. The charges leveled against Jesus—that he was a threat to the stability of the nation, opposed paying Roman taxes and claimed to be the rightful King—were purely political, not religious. To the Romans, any one of these charges was enough to merit death by crucifixion, which was usually reserved for slaves, non-Romans, radicals, revolutionaries and the worst criminals.

Jesus was presented to Pontius Pilate “as a disturber of the political peace,” a leader of a rebellion, a political threat, and most gravely—a claimant to kingship, a “king of the revolutionary type.” After Jesus is formally condemned by Pilate, he is sentenced to death by crucifixion, “the Roman means of executing criminals convicted of high treason.” The purpose of crucifixion was not so much to kill the criminal, as it was an immensely public statement intended to visually warn all those who would challenge the power of the Roman Empire. Hence, it was reserved solely for the most extreme political crimes: treason, rebellion, sedition, and banditry. After being ruthlessly whipped and mocked, Jesus was nailed to a cross.

The cross within Roman politics and culture was a marker of shame, of being a criminal. If you were put to the cross, you were marked as shameful, as criminal, but especially as subversive. And there were thousands of people put to the cross. The cross was actually positioned at many crossroads, and, as New Testament scholar Paula Fredricksen has reminded us, it served as kind of a public service announcement that said, “Act like this person did, and this is how you will end up.”

Jesus—the revolutionary, the political dissident, and the nonviolent activist—lived and died in a police state. Any reflection on Jesus’ life and death within a police state must take into account several factors: Jesus spoke out strongly against such things as empires, controlling people, state violence and power politics. Jesus challenged the political and religious belief systems of his day. And worldly powers feared Jesus, not because he challenged them for control of thrones or government but because he undercut their claims of supremacy, and he dared to speak truth to power in a time when doing so could—and often did—cost a person his life.

Unfortunately, the radical Jesus, the political dissident who took aim at injustice and oppression, has been largely forgotten today, replaced by a congenial, smiling Jesus trotted out for religious holidays but otherwise rendered mute when it comes to matters of war, power and politics. Yet for those who truly study the life and teachings of Jesus, the resounding theme is one of outright resistance to war, materialism and empire.

As Professor Taylor notes, “The power of Jesus is one that enables us to critique the nation and the empire. Unfortunately, that gospel is being sacrificed and squandered by Christians who have cozied up to power and wealth.” Ultimately, this is the contradiction that must be resolved if the radical Jesus—the one who stood up to the Roman Empire and was crucified as a warning to others not to challenge the powers-that-be—is to be an example for our modern age.