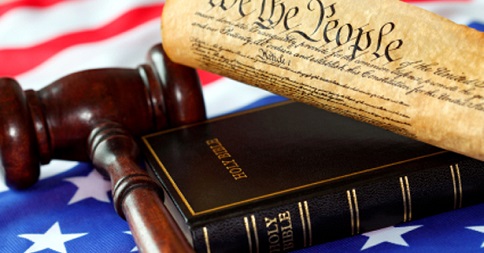 Cake hasn’t been an historical pivot point since Marie Antoinette made that famous dietary suggestion, but it seems to be back. Christians who earn their livings in any way associated with wedding cakes face extinction; the gay-marriage brigade is out to make an example of them and liberal judges are likely to assist.

Much of human history has been fraught with a tension between the power of man (i.e. government) and the power of God (i.e. religion). In the early centuries of the nation of Israel the power stood on the side of religion — the Jews had no king, only judges and the Mosaic Law. But during much of the past that tug-of-war has leaned to the side of government; the king determined the religion or, as in the case of the Romans, was the religion. Now and then the two powers attempted equality — ask Thomas à Beckett how that worked out. Starting, however, with the writing of the American Constitution humanity set out on a super-human balancing act — rendering unto Caesar that which is Caesar’s and unto God that which is God’s.

So, which is which? If we assume that God is really God Almighty, Creator of the Universe, then we know that He is the ultimate authority and the 1st Amendment makes sense. No mere human government should intercede between a man and his relationship with God. We may owe taxes to Caesar, but we owe God our very existence.

If we assume that God is merely a human construct, a fairytale, a hobby conjured up by those who need something to do on Sunday mornings, then the religion clause is totally absurd and government becomes the only authority and the only source of blessing. Therefore, we owe everything to Caesar.

Our forefathers attempted to create this razor balance with the 1st Amendment, “Congress shall make no law respecting an establishment of religion, or prohibiting the free exercise thereof; or abridging the freedom of speech… “ It is a line drawn in pages of history — man’s first attempt to keep government out of our relationship with our Creator. It does not prohibit our Creator from having influence on our government. These wise men of the past recognized God’s superiority in this age-old power struggle.

Note that the amendment addresses limitations on Congress, not on the citizenry, not on religious leaders, not on what people can and cannot believe. “Congress shall make no law…” It does not prohibit the free exercise of religion in governmental places, nor does it affect the exercise of public affairs in religious places. It is a restriction on the activities of the government regarding the religious beliefs of private citizens.

If a group of Christians choose to walk into the Capitol Rotunda and sing, “Blessed assurance, Jesus is mine. Oh what a foretaste of glory divine..” they should, by dint of the 1st Amendment, be able to do so. That does not constitute Congress making a law to establish a religion; Congress did nothing to produce such a concert, and no law was instituted. Might a passing atheist or Muslim be offended? Possibly, but the 1st Amendment, because it is a limitation on the activities of Congress, and not of private individuals, has no bearing on that at all.

May the pastor of a church, a rabbi in a synagogue, or an imam in a mosque be allowed to discuss political/governmental affairs from their pulpits? Again: the restrictions of the 1st Amendment are placed on the government, not on the private citizen. Nor are those restrictions connected to specific locals. A citizen of this country, according to this amendment, should be allowed to civilly express his beliefs, political or religious, anywhere without Congressional interference.

If governmental authorities attempt to put a stop to such a display of Christian devotion, is that Congress “prohibiting the free exercise thereof?” Certainly looks like it. Here we get into the troublesome difference between laws, duly passed by Congress and signed by the president, and regulations produced by some nameless and unaccountable bureaucrat. A choir, such as mentioned above, may be ushered out of the Capitol by some official at the behest of some misinformed bureaucratic malcontent, but any actual law passed by Congress prohibiting religious expression on public property would have to butt its head against the wall of the 1st Amendment.

So should a private citizen desire to apply his religious principles in his daily experience, should he want to express his religious positions in his public dealings, should he feel his conscience would be seared by participation in activities frowned upon by his religious understandings, can the government constitutionally prohibit any of these things? No.

But what about civil rights? The 1964 Civil Rights Act prevents laws that discriminate against anyone on the basis of “race, color, religion, sex, or national origin.” The cake activists evidently base their objections on the idea that a Christian baker’s refusal to bake wedding cake for gay nuptials is discrimination as described in this legislation. They equate being gay with being black, assuming that their minority station in our society automatically awards them these legal protections. But the law protects on the basis of race, color, and/or national origin –- not a cake issue. It covers discrimination according to sex. Perhaps that needs clarifying; it’s not concerned with whom one has sex. Lastly it protects against religious prejudice, but here it is the bakers whose religious freedom is being trampled.

So, if a person is gay and wants cake, he’s just out of luck? No. No one has refused anyone anything because of his (or her) sexual proclivities. What people have refused to aid and abet is gay marriage. Are Americans free to disapprove of this concept? Are we free to be concerned about the general societal effect? Are we free to believe that God disapproves?

If we go back to the 1st Amendment, that freedom is guaranteed — provided the judiciary pays attention to the Constitution. The freedom to have political and religious opinions is the reason people risked everything to come here –- and now cake takes precedence? Really?

But what about the freedom to “love whomever you want to love?” Does one baker refusing to bake a cake interfere with that? Of course not. If a cake can ruin a marriage, it had little chance of being fun until death-do-us-part.

Look back at the dichotomy at the beginning –- government vs. God. Can God bless a same-sex marriage? Don’t answer until you recall that God is more about grace than about morals; He knows we are lousy at obedience; He sent His son to rectify that problem. Can government bless a gay marriage? All it can do is abuse those who don’t approve, and no one has ever been blessed by someone else’s misery. Cake was a poor substitute for the starving Parisians who didn’t even have bread, and now it’s a silly stand-in for the glorious approval of God.