Home Church and State Let This Be A Lesson Christian

Let This Be A Lesson Christian 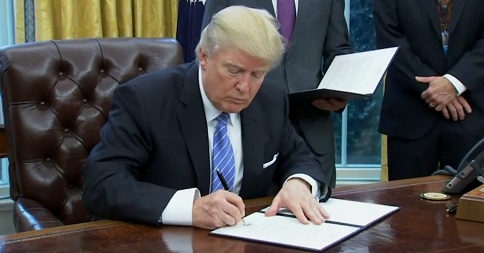 I must admit, it’s exciting to see Trumps big ol’pen scribbling away all those executive orders. Getting rid of all that fake Social Justice Warrior trash spawned in the darkness; damning orders brought about in the wee hours of the morning while most were sleeping off the stress of the day. Every time I read of another reversal of Obama’s Executive Orders, a smirk cracks my face and a chuckle promptly follows. But this could have been done way sooner without such casualties now strewn along the American landscape.

Bīkaner There are many reasons as to why it took so long to get Barry out of the Whitehouse.

We can look at the lies of the mainstream media. Could they have left their fly open any wider during this last election? If ever a time there was to reform so called mainstream “Media”, it’s now. The so-called News Leaders have shown themselves as nothing more than puppets to The Establishment and slaves to their sinful hearts. It’s been just shameful, but enlightening. For those of us who knew this already, justice in the form of “Told you so!” statements were served by us “conspiracy theorists”.

We can look at the racial tensions that Obama watered, fertilized (with his continuous silver tongue), sprayed (using chemicals from Monsanto, no doubt) harvested and sold to the public. The racial divide was way stronger when B.O. was up for a second term. Now even the whites hated themselves and those of any stronger skin pigment were hypnotized in to thinking that anyone with lighter skin was an enemy. So, don’t come to the voters booth unless you have a good tan.

We can look at the celebrities who championed anything and anyone who decried the Bible or anything sensible and conservative. When listening to such people like George Clooney, Madonna, Lady Gaga or Ashley Judd all I can picture is that old Three Stooges clip where Larry has an x-ray of his skull done. The x-ray shows nothing but a lone Coocoo bird, ‘coocooing’ away inside his cavernous void. (Eventually the Dr. just give’s Larry’s skull the wooden Mallet treatment).

Is it their lax sexual morals, their unneeded plastic surgeries, their “leaked” sex tapes or their substance abuses that makes them feel the political authorities and climate change experts that they are claiming to be?

There is no reason anyone with any common sense whatsoever should consider what these presidential leaches have to say. You’d be better to wake a vagrant in the alley and opinion him. At least he wouldn’t smell of the pungent narcissism that wafts from Hollywood’s “great” free thinkers.

Nonetheless our youth fall prey to such as these. Centuries ago it was the hardened patriot-warrior that people admired. . . today it’s a group of Southern Californians who pretend to be someone else for a living. Sad.

We can look to the language twisters such as the militant homosexuals, intolerant Muslims, liberal institution university professors and liberal politicians. They have taken words, with which we used to have some confidence in, and twisted them into knots the finest sailor could not undo. Conservative means racist. Christian means racist. Heterosexual means racist. Patriot means racist. Patio chair (if sat on by a heterosexual, conservative, Christian patriot) is racist and must be burned immediately!

We can look at the educational system. It’s becoming more and more obvious that to get a professorship in Academia, one must snort Bath Salts.

What in the world are these people doing teaching our youth? Common sense is out of style. Socialism is in style. Since when did a tweed jacket, lab coat or pocket protector become the identifying symbols of those who are omniscient and omnipotent.

These professors live vicariously through their students. And protests usually involve Caucasian, atheist, bi-sexual self-haters who have been tricked into thinking they are political power houses. Pawns I tell you, pawns.
The thought of a God who would convict the supposedly wise, is repugnant to the baby killing (abortion), LGBTQ…RSTUVWXYZ-(ish), barbiturate taking, enemy of the flag, communist university student. They are the way they are, because of the sludge dripping down from the ex-hippy socialist university professor. Barak Obama is perhaps the mold they are using at institutions supposedly of higher education (which explains everything).

Role models these people are not. I call for a reform to University staffing around the country.

And finally, Christians are a reason Barak Obama dirtied the carpets of the Oval Office for a second four years. Yes Christians.

I pay big bucks for my kiddos to go to a good school. The school is outspokenly Christian. But the school is scholastically at the top of the whole State/Province. (I remind my kids that each month I could be putting a payment on a truck and a nice boat for what we are investing in their education and spiritual development).

However, the amount of anti-Trump lingo I have heard from their classmates, is shocking. Obviously, they are parroting their parents, because half these kids would physically die trying to tear their eyes away from Halo 5, in order to catch the nightly News.

It’s nauseating to see the purposeful naivety of so called “Christian people”. They are so willing to believe the horse-pucky coming from their TV. Or, is it just apathy? Actually admitting that infanticide is happening right under their noses, means they’d actually have do something about it or at least feel guilty (which is very uncomfortable!). Where ever I go for information, to get to the bottom of things, other Christians can do also. I don’t have first hand access to congress, governors or private political documents. What I do have is my bible. And although not generally thought of as a political book (besides by Bill O’Riley) it does give me some good direction on how to act in a democratic election.

If you are a Christian, then the protection of life comes first when you vote.

What we have with abortion, is millions of people who have guns to babies heads. No! Scalpels to their necks (more gruesome, but totally accurate….let’s be real here). If you saw such a scene outside your local hospital, would you not try and rescue that baby? Would you not put your life on the line for that child?

This is not fiction people, this is the truth, abortion is masked as women’s rights; ignoring baby women’s rights (think about that for a smidge).

Modern Christian: remind me again why you voted for Obama a second time? During his first four years, surely enough blood of the unborn was spilt. Marriage was made a mockery of and Christians became the enemy. Was it the fact Islam was given a prominent place in the White house? Was it that the unemployment rate skyrocketed? Was it the demolition of our borders? What was it again that drew your vote from you?

This is a curse to us. Don’t go looking for God to bless you if you consciously ignore wrongs, especially the murdering of the unborn. If you are not into actively speaking out and against the evil in our land, then you’d be better to look at any wealth or “blessing” as rather Satan’s way of paying you off to keep quiet about such things.

As Christians, we also ignored the sanctity of marriage. “Well, as long as it doesn’t effect me!” has been the apathy of choice. But boy, hasn’t that been one to come back to kick us in the soft spot.

They started with don’t kill us if you find out (which of course, is wrong); to don’t beat us up if we hold hands in public; to just give us couples rights; to we want a government recognized marriage; to forcing clergy to marry us; to forcing schools to teach homosexuality as a natural relationship (along with anal sex between men); to forcing businesses to bake gay wedding cakes; to deciding “I am a woman today” (when being a biologically a man); to grown ‘He-shes’ using the same washroom as my seven year old daughter (how’s that working for you Target? Lose any cash over that?); to being prosecuted for not referring to a man (deciding he is a woman today) as “she” or “her”; or even to humans identifying as cats, goats, bridges or whatever else they feel like today.

Well, well, now it does affect you….and your kids…and your grandkids, doesn’t it?

The progression to such kind of moral regression, has happened at a lightning fast pace (especially in these last four years). This could have been stopped or slowed dramatically by the Christian, if only they’d have dropped the remote, purposely taken notice, gotten on their knees (remember our battle is spiritual) and risked the country club membership by becoming vocal (for a change).

Yes, dear Joe Christian, all of this could have been stopped early if only we’d have listened for the Spirit’s voice and obeyed our call to take up our crosses. Let’s not make these mistakes again. Guard the chance we now have again.