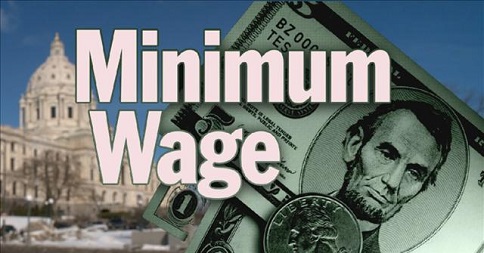 Take the left’s penchant for form over substance, combine with a fundamental ignorance of what money is and what it does, stir with hammer and sickle, and what do you get?

One would have thought, after decades of minimum wage increases, that America’s class warriors would have noticed the futility of printing money (which, as a practical matter, as we will see momentarily, is what artificially raising the minimum wage does) as a way to improve the target wage earners’ standard of living. But no.

And actually, merely failing to improve the standard of living is a best-case scenario, one that, in the real world, has never occurred, as evidenced by the very fact that every past minimum wage increase has been followed by calls for yet another increase – including, predictably, the one being demanded now.

For in fact, raising the minimum wage not only fails to make things better; it actually makes them worse, as can be seen in the following table:

By rights, if minimum wage increases actually did what its proponents believe, Starbucks baristas would be living, if not extravagantly, at least able comfortably to afford the basic necessities, and we would not be assaulted with so much “income inequality” hoop-de-doo. Obviously, neither one is the case. Why?

Is it any wonder, then, that today’s young whelps are struggling? Didn’t used to be that way, as the writer, born in 1952, can attest from his own whelphood. To wit:

Point being, I was not rich – far from it – but neither was I, nor anyone else, complaining about “income inequality,” even though the “wealth gap” was much, greater in times past. For example, the richest American living today, according to Forbes, is Bill Gates, net worth $79.6 billion. An amount not to be sneezed at, to be sure. But compare Bill Gates’s wealth to that of John D. Rockefeller, whose wealth, in 2014 dollars, was $340 billion. And the minimum wage at the time of Rockefeller’s death? Unfortunately, the table to which I linked doesn’t go back to 1937. But in 1938, the minimum wage was 25 cents – $4.20 in 2015 dollars. Three hundred forty billion dollars at the top, $4.20/hr at the bottom – that’s not “income inequality”; that’s income inequality on steroids.

And again, in this writer’s youth, nobody obsessed over “income inequality.” Why should one? If a man can live comfortably on what he makes, of what concern is it to him what another man makes? On the other hand, if a man cannot live on what he makes…

Sadly, that is the unfortunate position in which all too many of us find ourselves, hence the susceptibility of all too many of us to the raise-the-minimum-wage chimera. And it is an illusion. For as the historical numbers in the above table clearly show, the liberal nostrum of raising the minimum wage not only will not solve the problem, but will in fact make it worse.

What liberals so sorely lack is a fundamental understanding of what money is and what it does. Money – currency – contrary to minimum-wage increase advocates, really is nothing but pretty pieces of papers with dead statesmen’s pictures on them. It has no intrinsic value beyond the values of the paper and ink it is printed on and with, and assuming that the amount needed to print a $1 bill and a $500 bill is the same, there is no intrinsic reason why a $500 bill should buy any more than a $1 bill will. Money/currency, as Kevin Williamson explains, is no more than a conduit to facilitate the exchange of one good or service for another (emphases mine):

Dollars have value because of the things for which we can trade them: Picasso paintings …, coffee, cotton, cheeseburgers, sofa beds … checks, chickens, or pesos … goods are paid for in goods … we manufacture widgets or grow tomatoes or write novels because we wish to consume shoes and poached salmon and Buicks. The dollar or the euro is just a way to avoid the difficulties of trading a truckload of chickens for Les Femmes d’Alger.

Now suppose the government simply orders the $10/hr guy’s employer to pay him $15/hr while the $10/hr guy continues to produce at the same rate and in the same amount as before. Since the worker has not increased the amount of goods or services produced in an hour – nothing additional of value that the employer can exchange for $5.00 – where will the $5.00 come from?

If you guessed, “The government will print it,” go to the head of the class. Absent a 50% increase in the real value of the product of the $10/hr worker’s labor, the employer may absorb some of the loss, but ultimately, he will have no choice but artificially to raise his nominal sales price.

The conceit of minimum-wage increase advocates is that the government can arbitrarily “raise” the $10/hr worker’s wage to $15/hr – in effect, print five additional dollars – and the value of one hour of the $10/hr worker’s labor, without his doing anything to increase the real value of his work, magically becomes equivalent to the real value of the $15/hr worker’s work. But what actually happens is that each dollar that formerly represented one tenth of the $10/hr guy’s one hour of work now represents one fifteenth. The hour of work that had been divided into ten $1.00 increments has not been divided into 15.

Anyone who expects such a raise to happen, and within the same time as the proposed minimum-wage increase to $10/hr…well, let’s just say that the odds are not good. What will happen is that merchants will see their suppliers’ costs rise and be forced to raise their sale prices. What also will happen is so-called rounding, where, when supplier price increases would dictate a sale price increase of, say, two cents, the merchant will “round” the increase to five cents.

It’s called inflation, and anyone who expects wages, including, if not especially, the minimum wage, to keep pace with inflation needs to take another look at the above table for a quick – and painful – reminder of what has happened in the past.

The right strategy is to stop destroying the currency to support the liberals’ welfare state, not to legislate an artificial increase in the minimum wage. And to appoint a non-Keynesian Fed chairman. Expect neither one to happen any time soon.