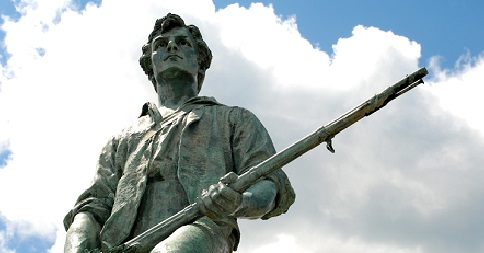 Men simply fight more courageously when they are fighting for friends and family.

In 1852, Abraham Lincoln gave a speech in Springfield, Illinois in which he talked about the attempts at required militia training.

He described how much of a joke the citizens made of any attempt at mandatory militia training.

“No man,” Lincoln said, citing the rules, “is to wear more than five pounds of cod-fish for epaulets, or more than thirty yards of bologna sausages for a sash; and no two men are to dress alike, and if any two should dress alike the one that dresses most alike is to be fined.” He also described the militia figure of “our friend Gordon Abrams” at a militia training, “on horse-back . . . with a pine wood sword, about nine feet long, and a paste-board cocked hat, from front to rear about the length of an ox yoke, and very much the shape of one turned bottom upwards.”

Lincoln was attempting to ridicule the dismissive attitudes of his fellow Illinoisans toward compulsory militia training. The conventional wisdom in military theory is that, for effective defense, the military must be centralized and continually maintained in the form of a compulsory standing army. Even from supposed “small government” advocates, this notion is never contested. However, the evidence from the time suggests that had it not been for the decentralized and voluntary militia system, Lincoln himself may have had significantly more trouble at the beginning of the Civil War.

During the Jacksonian era, the militia system in the states shifted largely from a compulsory to a voluntary system. Because of this, the Mexican War was first war fought by the United States that did not require a draft (the Civil War drafts are often cited as the first cases of conscription in the United States, but this ignores conscription administered by the states that took place during the Revolutionary War and War of 1812). During the Mexican War, roughly 50,000 troops were raised, all of whom enlisted without any compulsory measures.

When Lincoln started to mobilize troops against the Confederate States, he called 75,000 men. Not only was this number larger than that of the Mexican War, the Southern states had previously provided a disproportionate percentage of the Mexican War veterans. Lincoln’s request was a tall order. Not long after, he would ask for 42,00 more troops, and Congress would finally authorize up to 500,000 volunteers.

The Confederacy had likewise established a small army only weeks before the firing on Fort Sumter, originally consisting of 100,000 men, and after Lincoln’s mobilization of the Union army, added another 400,000. All of these men, on both sides, were volunteers.

By the time Congress assembled in the North to approve the 500,000-man army, half this number had already mobilized, even despite a number of defections. In both the Union and the Confederacy, the governments had to turn volunteers away because so many people offered their services so quickly.

Even the supplies for these men were provided with little to no central administration. In some cases, uniforms, mounts, and munitions were supplied by state or local governments, but many of the supplies were provided by private donations or even the enlistees themselves.

Only two days after Lincoln’s call for troops, to give one prominent example, a regiment of 850 volunteers from Massachusetts was already marching toward Washington, fully armed. The Confederacy was similarly so successful in providing volunteer enlistees that the Secretary of War had to turn away roughly 200,000 volunteers.

The Union was less successful than the Confederacy in mobilizing troops, yet their military still grew by a factor a fifteen in only a few short months. By comparison, the conscription-driven military growth for World War I only grew by a factor of three during the first four months of the war.

On both sides of the war, it is also worth noting that the voluntary nature of the early regiments drove men to fight more bravely. Voluntary regiments, as Jeffrey Rogers Hummel notes, “were bound together by ties of community and sometimes kinship, which were only strengthened as they carried the same personnel from battle to battle. No modern bureaucracy callously transferred men in and out, ticket punching them through some idealized career path, and disrupting the unit’s hometown cohesion in the process.”

Modern military theory recognizes this. Men simply fight more courageously when they are fighting for friends and family, rather than some abstract cause put forth by politicians. So the question is, why is this model not used today?

There can be many answers for this question, but at least one of the reasons is that the United States has not fought a truly defensive war since the nineteenth century. After Pearl Harbor and 9/11, we did see nationalistic upsurges in voluntary enlistees as people wanted to fight against people who did attack us domestically, and this certainly affected how people fought. But fighting people on their own home soil, even for those who believe that this kind of warfare is justified, is not the same thing as fighting to protect your own families and friends on your own land. Whether you agree with either side in the Civil War, this is what the soldiers of both the Union and the Confederacy believed they were doing, and with voluntary regiments, they were fighting alongside people they had lived alongside before the war.

Knowing this, it is easy to see how, absent foreign interventions, there is no need for a standing, centrally-administered army. When people are fighting to protect their loved ones directly, and when they are fighting alongside their hometown friends, there is little need to offer external incentive to entice them to fight. Defense is the natural reaction, and voluntary, decentralized militias were incredibly effective when people were fighting a war on their own soil. It is only interventionist wars that require something more.