Home Church and State Pushing The Mark Of A Beast

Pushing The Mark Of A Beast 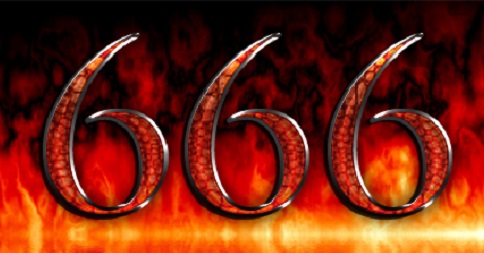 Unless you worship the Leftist Beast – you will be unable to make a living in America and you will be set upon to be destroyed.

“The second beast was given power to give breath to the image of the first beast, so that the image could speak and cause all who refused to worship the image to be killed. It also forced all people, great and small, rich and poor, free and slave, to receive a mark on their right hands or on their foreheads, so that they could not buy or sell unless they had the mark, which is the name of the beast or the number of its name.” – Revelation 13:15-17

When one considers the unholy alliance of the Secular Left in the West with empowering Jihadist Islam and His Heinous Barack Hussein Obama’s arming of ISIS and the Muslim Brotherhood while working overtime to ensure Iran obtains nuclear weaponry – scriptures like the one cited above makes me wonder aloud whether or not the second Beast is the Obama regime, which gives life to the first Beast and who causes the death of those who refuse to worship Allah (i.e.: Christians in Iraq).

As to forcing all people to receive a ‘mark’ in their right hands or foreheads, just take a look at what the leftist Politically-correct mob has been doing to force acceptance of the Global Warming hoax, homosexual marriage and even to the eradication of Southern heritage and culture over the Confederate flag hysteria. I for one, have always understood the ‘mark’ of Revelation 13 to be figurative rather than literal in terms of the way people will be forced to ‘think’ and ‘act’ if they want to make a living and survive in society.

You can see this in full display right now in America. Dare to criticize Liberal/Leftist policy – watch your livelihood be destroyed before your eyes. Refuse to submit to the homosexual agenda, your life will be destroyed and you will be stripped of your rights.

To get a good idea of how this works, this essay at the Federalist declares that the New Totalitarians Are Here, and illustrates this understanding very well. The fact is we now live in a tyranny that will demand you love their beast, or their beast will be used to punish you, until you submit and adopt the ideology of the Beast or be eliminated.

Know and understand what is being prepared against you and pray for strength to endure what is coming upon us with your faith intact.

The New Totalitarians Are Here

Totalitarians want their rule, and their belief system, to be accepted and self-sustaining – even if it takes bludgeoning every last citizen who disagrees.

There’s a basic difference in the traditions of political science between “authoritarians” and “totalitaritarians.” People throw both of these words around, but as is so often the case, they’re using words they may not always understand. They have real meaning, however, and the difference between them is important.

Simply put, authoritarians merely want obedience, while totalitarians, whose rule is rooted in an ideology, want obedience and conversion. Authoritarians are a dime a dozen; totalitarians are rare. The authoritarians are the guys in charge who want to stay in charge, and don’t much care about you, or what you’re doing, so long as you stay out of their way. They are the jefe and his thugs in a brutal regime that want you to shut up, go to work, and look the other way when your loudmouthed neighbor gets his lights punched out by goons in black jackets. Live or die. It’s all the same to the regime.

Totalitarians are a different breed. These are the people who have a plan, who think they see the future more clearly than you or who are convinced they grasp reality in a way that you do not. They don’t serve themselves—or, they don’t serve themselves exclusively—they serve History, or The People, or The Idea, or some other ideological totem that justifies their actions.

They want obedience, of course. But even more, they want their rule, and their belief system, to be accepted and self-sustaining. And the only way to achieve that is to create a new society of people who share those beliefs, even if it means bludgeoning every last citizen into enlightenment. That’s what makes totalitarians different and more dangerous: they are “totalistic” in the sense that they demand a complete reorientation of the individual to the State and its ideological ends. Every person who harbors a secret objection, or even so much as a doubt, is a danger to the future of the whole project, and so the regime compels its subjects not only to obey but to believe.

This is what George Orwell understood so well in his landmark novel “1984.” His dystopian state doesn’t really care about quotidian obedience; it already knows how to get that. What it demands, and will get by any means, is a belief in the Party’s rectitude and in its leader, Big Brother. If torturing the daylights out of people until they denounce even their loved ones is what it takes, so be it. That’s why the ending of the novel is so terrifying: after the two rebellious lovers of the story are broken and made to turn on each other, the wrecks left by the State are left to sit before the Leader’s face on a screen with only one emotion still alive in the husks of their bodies: they finally, truly love Big Brother.

Americans Are Getting Too Comfortable With Thought Control

I’ve gone down this road of literary and academic exposition because I fear an increasing number of my fellow Americans are, at heart, becoming totalitarians.

Now, by this I do not mean America is creating Nazis or Stalinists. It’s true, of course, that both Nazism and Stalinism were species of the genus “totalitarian,” but both have since died the deaths they deserved. I mean that ordinary people, and not a few opinion and thought leaders, are adopting the same insane belief that human minds can be molded and shaped and made to think in new ways by sheer force.

People like Takei and Bennett-Smith are lighting their torches and demanding rough justice even on issues where they’ve already won.

Yes, I mean people like actor George Takei and his odious attack on Justice Clarence Thomas. Takei called Thomas a “clown in blackface” and said Thomas had “abdicated” his status as an African-American. (Also, much like “1984,” some of the journals ostensibly committed to liberal thought have already tried to scrub their pages of Takei’s comments and consign the matter to the Orwellian memory hole.) I also include people like Quartz.com journalist Meredith Bennett-Smith, who disagrees with writer Cathy Young about sexual conduct codes on U.S. campuses, and thus wants the Washington Post never again to publish the “horrendous rape apologist” Young in its pages. This isn’t political debate or even name-calling: this is the incendiary dehumanization of an African-American judge and a female writer.

I grant that overall, American political debate on all sides has become nastier and less tolerant. What makes these kinds of attacks, however, smack of totalitarianism—and I could reel off dozens more examples, but your computer would run out of pixels—is that people like Takei and Bennett-Smith are lighting their torches and demanding rough justice even on issues where they’ve already won. In other words, it isn’t enough that Thomas was in the Court’s minority, or that no college in America is bothering to listen to Young. They want Thomas and Young silenced, stripped of their status in their peer group, and to recant—even after being defeated in public on the issue at hand.

That’s terrifying, because it means that for a fair number of people in what’s supposed to be a democracy, “winning” in any normal political sense simply isn’t enough. They are not really trying to capture something as pedestrian as political equality, nor are they satisfied if they get it. They are not really seeking a win in the courts, or a legal solution, or a negotiated settlement. Those are all just merit badges to be collected along the way to a more important goal: what they really want, and what they in fact demand, is that you agree with them. They want you to believe.

It is not enough for these Americans to say: “I have had my day in court and prevailed.” In effect, they now add: “You do not have the right to hold a different opinion, even if you lose in the public arena. You may not hold on to your belief as a minority view, or even as a private thought. And if you persist and still disagree, I will attack you without quarter and set others on you to deprive you of your status in your profession, of your standing in your community, and even of your livelihood.”

Even after losing, you will be forced to admit the error of your ways.

This attitude promises social warfare without end, because there is no peace to be had until the opposing side offers a sincere and unconditional surrender. It means that the people on the Left taking bakers to court, de-Africanizing Justice Thomas, and making Young an accomplice to rape will not be satisfied with winning. For the new totalitarians, prevailing in the courts or at the ballot boxes isn’t enough if there’s still a suspicion that anyone, anywhere, might still be committing thought crime.

Most of all, they do not want you, Present Reader, to even think about agreeing with people like Thomas or Young. By attacking everyone in the public sphere from judges to writers, they’re sending a clear warning that there’s plenty of room in the bonfire. It is a vow that you will be held to account for your personal thoughts, even if you’ve already been defeated in a democratic or judicial contest.

No, even after losing, you will be forced to admit the error of your ways. You must accept that you’ve sinned. You must discard your own values and accept the ideas of your betters. You must denounce yourself for undermining the construction of a better world.

You, too, must love Big Brother.