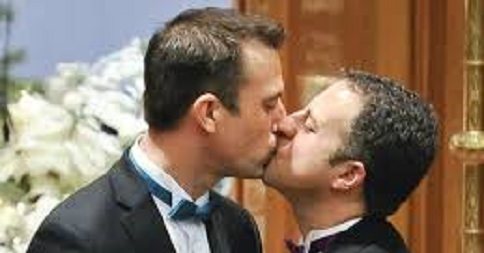 Question: “How does a same-sex ‘marriage’ threaten your marriage?”

• We’re not just talking about one marriage…the cost of redefining marriage for a nation of more than 300 million people means drastic and potentially irreversible consequences for the future of marriage, family, and child-raising.

• Marriage is not “all about me.” The threats to marriage as an institution will harm society, especially children. Advocates of redefining marriage display a narrow self-interest by measuring marriage only on how laws make them feel.

Question: “Why do you oppose civil unions or domestic partnerships as well? All that does is give some rights and benefits to same-sex couples like hospital visitation and health coverage.”

• These are emotional ploys used to elicit support for marriage counterfeits. The truth is that most “rights” same-sex “marriage” advocates claim they are denied are readily available.

• In most states, hospital visitation can be solved with simple forms that don’t even require a lawyer.

• “Civil unions” inevitably lead to demands for same-sex “marriage.” Same-sex “marriage” advocates are on record – they believe that these marriage counterfeits are “separate and unequal.”
Any public “support” should be considered as purposeful deceit.

• All people should be permitted by law to assign financial, medical, and legal responsibilities to the person of their choice regardless of the nature of their relationship. We don’t have to redefine marriage to make that happen. In most places, these rights already exist.

Question: “Why shouldn’t same-sex couples have the same rights as everyone else? They just want to marry the person they love.”

• The purpose in recognizing marriage is to create stable homes with both a mother and a father for any children who enter the home. Marriage is about a child’s right to have a mom and a dad, not adults’
demands for state approval of any relationship.

• The ability to marry “the person I love” is already legally restricted in many ways beyond same-sex “marriage”:

• A person cannot marry someone who is already married.

• Someone who is already married cannot find a third, fourth, or fifth person to marry, whether the person “loves” all of those additional parties or not.

• A person cannot marry a minor.

Question: “Why are you against equal rights for ‘gay people?’ Why do you want to make ‘gay people’ second-class citizens?”

• We are for marriage. We are not “against” anyone.

• Same-sex “marriage” advocates are not asking for “equal rights”… rather they are demanding that society as a whole be forced to embrace the idea that moms and dads are meaningless to children.

• The real second-class citizens become children whose need for both a mom and a dad are ignored in favor of adult self-interest.

Question: “Denying same-sex couples their fundamental rights is bigoted. How is this different than when African-Americans were denied their rights before the civil rights movement?”

• Any attempt to compare the good of marriage to the evil of racism is unworthy of serious discussion. It is contemptible to equate the hard-fought victories of the civil rights struggle with the attempt to impose a redefinition of marriage on society.

• Race doesn’t matter when it comes to marriage. Gender obviously does. In order for there to even be a marriage, by definition, both a man and a woman must be involved. Marriage is color-blind, but can’t be gender-blind.

Question: “How can you possibly claim same-sex ‘marriage’ would impact religious freedom?”

• It is not a claim – it has already happened. Here are just two examples that Alliance Defense Fund {ADF) is litigating:

• The Ocean Grove Camp Meeting Association is being prosecuted by the New Jersey Civil Rights Commission for discrimination because it declined to open its places of worship for a “civil union” ceremony. While the same-sex couples found suitable beachfront places for their ceremonies, they still sought the legal persecution of the ministry. ADF attorneys are defending the ministry’s First Amendment right to use its property in a manner consistent with its Christian beliefs.

• Elaine Huguenin, a photographer in Albuquerque, New Mexico, received a request to photograph a same-sex “commitment” ceremony. Because of her deeply-held religious beliefs, Elaine respectfully declined. The two women easily found a photographer for their ceremony, which they were able to have with no problem. But the women decided to attack Elaine for not endorsing their ceremony, filing a complaint with the New Mexico Human Rights Commission, which found her guilty of “sexual orientation discrimination” and ordered her business, Elane Photography, to pay nearly $7,000 in attorneys’ fees. ADF has appealed the case in state court on Elaine’s behalf.

Question: “As long as they are not forcing churches to perform and/or recognize the union then what difference does it make?”

• Religious freedom and free speech will be harmed in numerous ways that stop short of forcing churches to perform ceremonies. Could a church be forced to rent an adjacent hall or room for same-sex “marriage”? Could a pastor be criminally charged with “hate speech” (as has occurred in Sweden) for preaching on homosexual behavior? Based on the cases that ADF is already familiar with or engaged in, the
answer to each question is “yes.”

Question: “Why do heterosexuals think they can love and raise children and families better than I can? How dare they judge me and my fitness as a parent or loving partner?”

• The defense of marriage isn’t a “judgment” on anyone. Instead, marriage is a wise acknowledgement of the distinct differences between men and women, and reinforces the truth that both sexes bring irreplaceable gifts to family life.