Religion and Government in the United States.

Religion and Government in the United States. 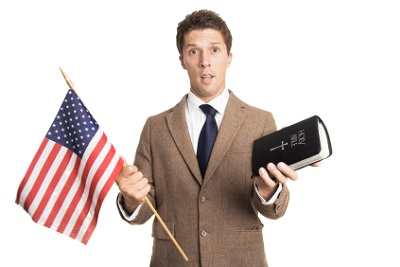 America’s early days saw formal establishments of religion in nine of the original thirteen colonies. In fact, the various states had official religious establishments dating back to Virginia in 1609, with Massachusetts being the last state to “disestablish” in 1833.

When the framers of the federal constitution considered this subject, they decided against any type of national religious establishment. It was decided that was to be a State matter. The First Amendment to the Constitution assured that the Federal government was powerless over religious matters, except in assuring that there was no national establishment and in guaranteeing the free exercise of religion.

As the various States gradually removed the formal religious establishments from their governing systems, after 1833, the U.S. was left with an informal relationship between the Church (religion) and the State (state and federal governments). Under this arrangement of the Federal and State governments firmly based on Christian principles, but without the formal establishment of Christianity as the “national religion”, the United States, in a relatively short period of time, developed into the strongest nation on earth, being synonymous with freedom and liberty.

Today, however, the Bible and Christian principles and morals, are continually being censored from the American public, including our schools. Using the “separation of church and state” as their guideline, judges and other government officials are removing Christianity from a growing number of arenas administered by Federal and State governments. But, are Christians violating the founding principles of our country when they call for Christianity to be voiced in public?

To Christians, it is obvious that most of our social problems could be solved with adherence to Biblical Christian principles. But recently, Christians and the American public have been told that such an attitude is unconstitutional, because the First Amendment to the United States Constitution calls for the separation of church and state. This view has been voiced so many times in recent years that most people now believe that the American government was specifically designed with “a wall of separation between church and state.”

Actually, neither the Constitution, nor the Bill of Rights, nor any other founding document contains the phrase “separation of church and state.” The First Amendment, which is said to have constructed this wall of separation between church and state, simply reads: “Congress shall make no law respecting an establishment of religion, or prohibiting the free exercise thereof; or abridging the freedom of speech, or of the press; or the right of the people peaceably to assemble, and to petition the Government for a redress of grievances.” Nowhere does the First Amendment even suggest that Christianity cannot be expressed in public, or that the government cannot abide by Christian principals.

Robert L. Cord accurately describes the original intent of the religion clause in the First Amendment:

“Regarding religion, the First Amendment was intended to accomplish three purposes. First, it was intended to prevent the establishment of a national church or religion, or the giving of any religious sect or denomination a preferred status. Second, it was designed to safeguard the right of freedom of conscience in religious beliefs against invasion solely by the national Government. Third, it was so constructed in order to allow the States, unimpeded, to deal with religious establishments and aid to religious institutions as they saw fit.”

The founding fathers did not include the First Amendment in the Constitution to prevent Christianity from influencing state-established institutions; on the contrary, America’s founding fathers expected our nation to be, on the whole, Christian, and that our government should reflect a Christian heritage.

This understanding of the First Amendment becomes quite apparent when one considers the actual words and actions of America’s settlers, founders and leaders. The men who founded our country and established our government clearly based it on Christian principles to which they adhered. This is obviously confirmed by the fact that many of the State Constitutions included the requirement that a man must be a Christian in order to hold public office.

One of the Supreme Court’s most blatant violations of the Constitution has come about through their reinterpretation of the First Amendment of the Bill of Rights. Prior to this constitutional violation, the Bill of Rights applied only to the Federal government, and not the States. The First Amendment actually begins with the phrase “Congress shall make no law…” As one of many efforts that the founders used to limit the power of the Federal government, the Constitution left authority over religious matters to the States. The Supreme Court consistently adhered to this constitutional principle until well into the twentieth century.

The most abusive reinterpretation of the First Amendment began in 1940 with the Supreme Court’s ruling in Cantwell vs. Connecticut. Here, the Court applied the “free exercise” clause of the First Amendment to the States. The Supreme Court, in direct opposition to the original intentions of the Constitution, applied a portion of the Bill of Rights to the States, thus removing authority from the States and further empowering the Federal government.

The First Amendment, which originally prohibited the Federal government from making any “law respecting the establishment of religion or prohibiting the free exercise thereof,” has evolved into something entirely new. The Court’s rulings, and the rulings of lower courts (Federal and State) have created this pseudo-law of “separation of church and state.” One should understand that “separation of church and state” is not actually a law. It is a doctrine, or a legal concept, that has been implemented by the various courts, primarily over the last fifty years, to micromanage the religious life of the American people. During this time, the courts, at all levels, have ruled in ways that essentially guarantee the freedom from religion, instead of the freedom of religion.

This doctrine of “separation of church and state” is being used to purge religion from American society. The historical perspective on church and state issues reveals a much different story. The Federal government was originally designed to accommodate the religious communities. Religion and religious expression were to be encouraged. This is why the first Congress asked President George Washington to issue a Thanksgiving Proclamation upon completion of the Bill of Rights. Today, that practice would be viewed as unconstitutional. It would violate the “separation of church and state.”

Upon examining our early history, we cannot avoid the conclusion that America was founded on Christian principles, and the assumption by the founding fathers that American citizens would continue to adhere to those same principles. Unfortunately, the modern interpretation of the First Amendment ignores historical fact. Instead, it provides a convenient vehicle for Secular Humanism to attempt to implement a value-free society in America. But this is not possible, as someone’s values will ultimately prevail. By eradicating the Christian worldview from public education, social services, courtrooms, etc., some other worldview must fill the vacuum. By distorting the First Amendment, the United States government has allowed Humanist values to prevail. Abraham Lincoln saw this same thing happening during his presidency, and in 1863 called for a National Day of Fasting, citing the fact that “We have been the recipients of the choicest bounties of Heaven…But we have forgotten God.”

The Bible describes the values of Secular Humanism and the dangers of those values prevailing in society where men set themselves up as God, and “do that which is right in their own eyes.” When the absolutes of Christian principals and morality are removed from the government, and replaced with “Politically Correct” standards, the state then becomes the ultimate authority, and government officials may commit whatever atrocities they like, because only the government may determine what is right and wrong. This is as evident today with the scandals that have shaken this nation recently, as it was when slavery was a hotly debated political topic in the 1800s.

In 1849, William Jay (son of John Jay, a Founding Father and first Chief Justice of the U.S. Supreme Court), wrote a book which addressed the slavery issue. In his introduction he explained why he would not accept the “Politically Correct” idea of slavery, despite its popularity and prevalence at the time. His words provide excellent advice for us today:

“The writer [William Jay] is a believer in the Divine authority of the Scriptures, he acknowledges no standard of right and wrong but the Will of God, and denies the expediency of any act which is forbidden by laws dictated by Infinite Wisdom and Goodness…. Patriotism, honor, glory, and national prosperity are terms to which the Christian and the mere politician attach different ideas, and estimate by different standards. He who admits the authority of the Bible will not readily acknowledge that whatever is ‘highly esteemed among men’ must be right, nor that which is unpopular is, of course, wrong.”

There is a vast difference between being “Politically Correct” (as determined by the state and current ideology), and being morally correct (as determined by God and unchanging Christian principles). The “Politically Correct” movement has gained much momentum in recent years and now dominates the thinking on many college campuses and in many public-service arenas. “Political Correctness” censors any speech, and attempts to censor any attitude, which does not agree with the philosophy of those in power.

Americans must choose to either ignore the intentions of our founding fathers and surrender our God given rights to the sovereignty to the state, or return to our original government based on God’s principles for justice — without establishing Christianity as the mandatory religion for all citizens. True freedom can only exist in a land governed according to the principles set forth in Bible.