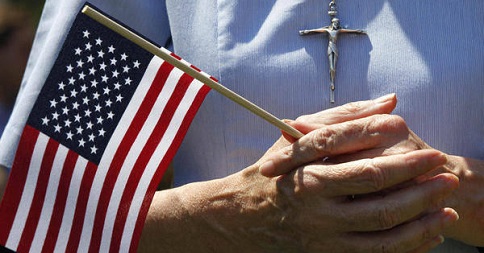 The key to a successful free society is when a society is a virtuous society. The success of the American System is primarily due to the fact that the foundation of our country is rooted in Judeo-Christian values and principles. The framework of the structure of our government is largely laid out in the Book of Deuteronomy in the Holy Bible.

The concept of “innocent until proven guilty” was first used in the Mosaic System of which Israel emerged under when they came to the Promised Land after 40 years of wandering in the desert after fleeing from slavery in Egypt. The men who were instrumental in establishing our system over 200 years ago were men of faith, and in the Declaration of Independence it indicates that they did so “with a firm reliance on the protection of divine Providence.” They were on their knees during the American Revolution, seeking guidance and protection from God, and after Benjamin Franklin made the recommendation, prayer became a part of the delegation in Philadelphia in 1787 as they constructed the United States Constitution. Benjamin Franklin said that “only a virtuous people are capable of freedom,” and John Adams commented that the “Constitution was made only for a moral and religious people. It is wholly inadequate to the government of any other.” Our freedom is a gift from God, our natural rights are God-given, and the result of the United States being a Godly nation has been that the United States is a free nation. As George Washington said, “Of all dispositions and habits which lead to political prosperity, Religion and morality are indispensable supports.”

We are a Christian nation in the sense that Christian values and principles are intertwined with each and every cornerstone that support and comprise the foundation of our system, and it has been those Godly principles that have led to the success and prosperity of the United States of America.

We are not, however, a theocracy. We are not a Christian nation in the way an Islamic State can call itself a Muslim Nation. Christianity is not the established church, nor should be. Being a Christian is not a requirement to be an elected official, and adherence to the Word of God (Holy Bible) is not necessary in order for a person to retain their citizenship. We are not a theocracy, and for the most part, Christians have never called for our country to be one. An oligarchy where a few powerful people control the many is not in line with the principles of freedom, regardless of what kind of oligarchy it may be.

America is in a dark period. We have been infiltrated by a statist element that seeks to destroy the Christian foundation of this nation, and silence those that speak in a manner that seeks to follow a Christian, moral standard. There are real threats out there beyond the statists in our government, like Islam, as well. And one of the targeted aspects of the United States that is in Islam’s crosshairs is the Christian nature of our people, and the moral supports that exist from a Christian viewpoint that our system of freedom stands upon. Whether we like it or not, the statists, the Muslims, and even the secular hardliners in places like China, North Korea, and Russia have made our struggle one that can easily be characterized as between good and evil, and Godliness versus what seems to be a demonically inspired way of thinking.

Conservatives, recognizing that a large part of the difficulties we are experiencing as a society stems from the reality that we are turning our back on God, have called out to Him for assistance. Allah has been, in my opinion, rightly connected to Lucifer. The political right has indicated that if we don’t get the church leadership and congregations working with us, and into the voting booths, we will lose this nation, our freedom, and our soul as a nation. I concur.

Tea Party groups and other conservative organizations are calling for a return to Godliness, not because they are necessarily on a religious crusade, but because they recognize that our willingness to turn our back on God is a large part of the problem we are having with a swiftly tilting nation. Our rejection of the foundational Christian values of this nation is the reason tyranny is on the rise, statism runs amok through our government, and we are becoming in many ways accepting of Islamic extremism; homosexual demands to silence all who dare to believe differently than they, and monkeying with biology with fanfare and media approval as a person mutilates their genitals with the aid of doctors because they “feel” like they should have been someone else. Daring to deny these groups your full allegiance makes you a bigot and a hater. Your freedom to believe what you want to believe is rejected because you refuse to turn your back on the Godliness that made this nation great, and because you are willing to call sin what it is, and because you are willing to call Islamic terror what it is.

There is a fine line between recognizing the reality of what we are in the midst of, and a religious crusade. Many of the aspects of each may even look similar. The reality is we must not turn our back on God. Perhaps what it will take to turn this all around may only slightly fall short of a major religious crusade where we are falling to our knees with a sackcloth on our back. Perhaps, as some Christians have indicated to me, the fight is about doing what is right because we can’t win this since, as they believe, God’s plan for the end of days is in motion, and the Book of Revelation tells us we can’t win it.

I am an optimist, a Christian, and a patriotic American, so I sum it up as either we are going to turn this around, create a model for a future generation to use, or fight the good fight until the Second Coming of Jesus Christ.

2. We may not restore the republic, but perhaps we are Cicero. Cicero was alive during the time that the Roman Republic was changing into the Roman Empire, losing sight of its foundation rooted in the rule of law, and becoming a statist system where the Congress was irrelevant, and through subsidies and various government programs the people were becoming nothing more than dependents of the State, voting those in that promised gifts from the treasury. Cicero preached honest government, and for his efforts he was exiled. During his exile, he wrote about honest government, and restoring the republic, and his publisher mocked him, asking, “Who will read your writings? You have been exiled.” Thomas Jefferson read, and appreciated, Cicero’s writings. Cicero may not have been able to restore his own republic, but he was an instrumental part in creating ours. So maybe we are Cicero, fighting the good fight, but losing for now, only for a future generation to use the template we have created to pull America out of the muck.

3. The Christians saying that it is done, and God’s final plans are in motion, may possibly be correct. If this is the case, then what a noble cause and a great witness as a Christian, to resist evil, to fight the good fight, to run the race, and do what we can, even when the odds seem against us, to restore the nation to a constitutional model that is both Godly, and free.

America began as a Great Experiment in self-government, a test on whether or not limitations upon a central government could succeed. We are no longer that experiment. We are an accomplishment, or at least we were. The experiment succeeded beyond anyone’s expectations. The United States of America became an exceptional nation, an exception to the rule of tyranny, of which most nations are, and have been in history. Liberty is the exception, in history. America is a miracle. The question is, can we restore the miracle, provide an opportunity for the miracle to occur again in the future, or can we squeeze out of the miracle a little more freedom, a little more Godliness, and a little more hope as we enter an age that is doomed to become darker with each passing year.

Regardless of the outcome, the fight is a noble one. An American one. And not so much a religious crusade, as it is a crusade for liberty, and a crusade for the limiting principles of the United States Constitution.

Sigmund Freud once said, “America is a mistake.”

I say, “Betting against America is a mistake.”

Americans are fighters for liberty, be it religiously inspired, or patriotically inspired. While not necessarily a religious crusade, we must admit, that a return to Godliness must be a key part of the strategy to restore the republic.