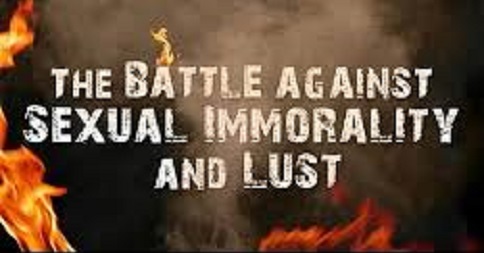 1. Rehoboam the son of Solomon reigned seventeen years in Jerusalem. Under his reign, the Bible says, “And Judah did evil in the sight of the Lord. . . ” (I Kings 14:22a). Among those evils listed was their condoning of Sodomites in the land.

2. This is one of the prevalent sins of America today. In times past the Sodomites were not condoned in America.

3. Not only are there Sodomites in this land, but they are welcomed and harbored. Under the Carter administration, Cuba dumped thousands of their unwanted Sodomites into Florida. Cuba was anxious to get rid of them and the Sodomites were anxious to escape what they called, “Severe repression in Cuba.”

4. The light of the churches is so faint and flickering that these creeping things of darkness have come out into the open.

5. Let’s now turn the light of God’s Word directly upon this epitome of moral degradation, and send the Sodomites scurrying back into their hiding places.

I. God’s Description of the Sodomites

“Wherefore God also gave them up to uncleanness through the lusts of their own hearts, to dishonour their own bodies between themselves:

“Who changed the truth of God into a lie, and worshipped and served the creature more than the Creator, who is blessed forever. Amen.

“For this cause God gave them up unto vile affections: for even their women did change the natural use into that which is against nature:

“And likewise also the men, leaving the natural use of the woman, burned in their lust one toward another; men with men working that which is unseemly, and receiving in themselves that recompence of their error which was meet.” Romans 1:24-27

1. Unclean–Vs. 24–Lazarus was laid at the rich man’s gate full of sores. He was probably looked upon as unclean by many in his day. God did not call him unclean. God’s angels carried him into Abraham’s bosom when he died. Lazarus was clean in his heart.

“Blessed are the pure in heart: for they shall see God. .” Matthew 5:8

The unclean go into hell when they die!

“For this ye know, that no whoremonger, nor unclean person, nor covetous man, who is an idolater, hath any inheritance in the kingdom of Christ and of God.” Ephesians 5:5

2. Vile–Vs. 26-27–The Devil’s leading religion in America, secular humanism, described by God in verse 26, states its position concerning Sodomy in their “Humanist Manifesto II”– “. . .we believe that intolerant attitudes often cultivated by orthodox religions and puritanical cultures, unduly repress sexual conduct. The right to birth control, abortion, and divorce should be recognized … the many varieties of sexual exploration should not in themselves be considered evil.”

The humanist attempts to camouflage the corruption of the Sodomites, but God’s inspired, infallible, inerrant, preserved Word reveals their filthy sins as vile!

“Thou shalt not lie with mankind, as with womankind: it is abomination.” Leviticus 18:22

The Sodomites are an abomination to God!

Webster’s definition of an abomination–“Extreme disgust and hatred; abhorrence; detestation; loathing. That which is abominable; anything hateful or shamefully vile.”

The sins of Sodomy are also suggested or declared by all who abominably attire themselves!

Sad to say, the biblical title of Sodomites, which was given to these debased sinners by God, is seldom used by those who cry out against this terrible wickedness. They usually use the term–

1. Homosexual–This is like calling a drunkard an alcoholic; or calling a thief a kleptomaniac. The sharp words of God are “. . . quick, and powerful and sharper than any twoedged sword. ”

When preachers, and others who oppose this vile sin, use the term “homosexual” they are only giving a partial definition of what a Sodomite is!

2. Gays– This is their choice title of this day. This, like the other, only gives a partial definition of what a Sodomite is, and the sharp edge of the Word of God is gone.

According to Webster, “gay” means: “loose; licentious.” The Sodomites far surpass that in their vileness.

A Sodomite woman is not a lesbian nor is a Sodomite man a gay. They are Sodomites! Call them what they are by using the title of infainy given them by the Lord. Don’t let the Sodomites choose their title. God has already named them!

Call them Sodomites whether they like it or not.

They will never be convicted of their vile sins without the Word of God.

III. THE BOLDNESS OF THE SODOMITES–

“The shew of their countenance doth witness against them; and they declare their sin as Sodom, they hide it not. Woe unto their soul! for they have rewarded evil unto themselves.” Isaiah 3:9

1. Marches–They no longer sneak around in hiding like roaches and rats. They now march down the main streets of cities and towns carrying signs, declaring their sin as Sodom!

This does not reveal advances made by the Humanist Sodomite liberation movements. It simply reveals how low-down the morals in this nation have plunged.

When Sodomites start marching down main street it is like a house infested with roaches, where no effort is made to control or eliminate them!

Here is the disgraceful report of some Sodomite marches of June 26, 1983:

2. Newspapers-It is becoming increasingly more obvious that the news media in general is pro-Sodomite!

3. Politics-A few years ago a Sodomite would not dare to run for any office, and no political party would endorse sodomy for votes. The Democratic party has. “Walter F. Mondale cites party commitment to eliminate all laws, rules and regulations which discriminate against individuals on the basis of sexual orientation.”

The Metropolitan Community Church openly denies that sodomy is a sin!

The boldness of the Sodomites in Judah was a result of and a testimony to the prevailing evil condition of the people in general.

This is the same sequence that we are now witnessing in America.

6. Television-This has been one of the key instruments that Satan has used io brainwash this wicked world into accepting Sodomites into its culture.

IV. THE EXAMPLE OF THE SODOMITE–

“And turning the cities of Sodom and Gomorrah into ashes condemned them with an overthrow, making them an ensample unto those that after should live ungodly.” II Peter 2:6

Look at the example and learn the lesson well America!

V. JUDAH AND THE SODOMITES–

“If a man also lie with mankind, as he lieth with a woman, both of them have committed an abomination: they shall surely be put to death; their blood shall be upon them.” Leviticus 20:13

1. Asa-“And Asa did that which was right in the eyes of the Lord, as did David his father.

“And he took away the sodomites out of the land, and removed all the idols that his fathers had made.” I Kings 14:11-12

2. Jehoshaphat–“And he walked in all the ways of Asa his father; he turned not asidefrom it, doing that which was right in the eyes of the Lord. . . ”
“And the remnant of the Sodomites, which remained in the days of his father Asa, he took out of the land.” I Kings 22:43a,46

3. Josiah–“And he brake down the houses of the sodomites, that were by the house of the Lord, where the women wove hangings for the grove. ” II Kings 23:7

VI. THE DOOM OF THE SODOMITES–

The first mention principle of Bible interpretation is a very profitable study.

In Genesis chapters 13, 18, 19 we find God’s attitude toward and His judgment against Sodomites:

“But the men of Sodom were wicked and sinners before the Lord exceedingly.” Genesis 13:13

“And the Lord said, Because the cry of Sodom and Gomorrah is great, and because their sin is very grievous.” Genesis 18:20 ”

“Then the Lord rained upon Sodom and upon Gomorrah brimstone and fire from the Lord out of heaven; And he overthrew those cities, and all the plain, and all the inhabitants of the cities, and that which grew upon the ground.” Genesis 19:24-25

God did not find ten righteous people in Sodom. That place was so given over to its vile corruptions that no hope remained. God’s wrath was poured out upon them because of their sins.

Where Sodom once stood there is now the Dead Sea. Nothing grows there. Do not harbor the hope that God will overlook this heinous wickedness that is being accepted and legalized in America. We could fall as suddenly as Sodom did!

You will search in vain for any trace of God’s excusing the Sodomites in their debased state.
“…God overthrew Sodom and Gomorrah. . . ” Isaiah 13:19b

1. The sins of the Sodomites are of the vilest nature. God’s hatred of their abominations is revealed in their incurable disease that strikes with near 100% mortality–AIDS!

2. Sodomy is not an alternate life style. It is a sin. It is a style of death!

3. There is no such thing as Sodomite rights found in God’s Word.

4. There is one hope for America–Do as Asa, Jehoshaphat and Josiah.

5. There is one hope for the Sodomite–The Lord and Savior Jesus Christ.

“For there is one God, and one mediator between God and men, the man Christ Jesus; “Who gave himself a ransom for all, to be testified in due time.” I Timothy 2:5-6

“Who gave himself for us, that he might redeem us from all iniquity, and purify unto himself a peculiar people, zealous of good works. ” Titus 2:14