The Absurd, Bureaucratic Hell That Is The American Police State 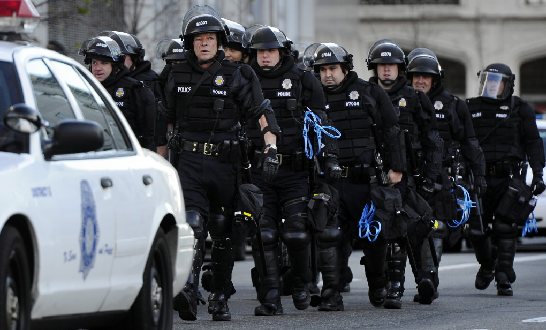 Whether it’s the working mother arrested for letting her 9-year-old play unsupervised at a playground, the teenager forced to have his genitals photographed by police, the underage burglar sentenced to 23 years for shooting a retired police dog, or the 43-year-old man put in a chokehold by NYPD officers allegedly over the sale of untaxed cigarettes, the theater of the absurd that passes for life in the American police state grows more tragic and incomprehensible by the day.

Debra Harrell, a 46-year-old South Carolina working mother, was arrested, charged with abandonment and had her child placed in state custody after allowing the 9-year-old to spend unsupervised time at a neighborhood playground while the mom worked a shift at McDonald’s.

A Connecticut mother was charged with leaving her 11-year-old daughter in the car unsupervised while she ran inside a store—despite the fact that the child asked to stay in the car and was not overheated or in distress. A few states away, a New Jersey man was arrested and charged with endangering the welfare of his children after leaving them in a car parked in a police station parking lot, windows rolled down, while he ran inside to pay a ticket.

A Virginia teenager, charged with violating the state’s sexting law after exchanging sexually provocative videos with his girlfriend, was issued a search warrant to “medically induce an erection” in him so police could photograph his erect penis and compare it to the images sent in the sexting exchange.

In Georgia, a toddler had his face severely burned when a flash bang grenade, launched by a SWAT team during the course of a no-knock warrant, landed in his portable crib, detonating on his pillow. Also in Georgia, a police officer shot and killed a 17-year-old boy who answered the door, reportedly with a Nintendo Wii controller in his hands.

Now we can shrug these incidents off as isolated injustices happening to “other” people. We can rationalize them away by suggesting that these people “must” have done something to warrant such treatment. Or we can acknowledge that this slide into totalitarianism—helped along by over criminalization, government surveillance, militarized police, neighbors turning in neighbors, privatized prisons, and forced labor camps, to name just a few similarities—is tracking very closely with what we saw happening in Germany in the years leading up to Hitler’s rise to power.

When all is said and done, what these incidents reflect is a society that has become so bureaucratic, so legalistic, so politically correct, so militaristic, so locked down, so self righteous, and so willing to march in lockstep with the corporate-minded police state that any deviations from the norm—especially those that offend the sensibilities of the “government-knows-best” nanny state or challenge the powers that be—become grist for prosecution, persecution and endless tribulations for the poor souls who are caught in the crosshairs.

Then there are the incidents, less colorful perhaps but no less offensive to the sensibilities of any freedom-loving individual, which should arouse outrage among the populace but often slip under the radar of a sleeping nation.

For instance, not only is the NSA spying on and collecting the content of your communications, but it’s also going to extreme lengths to label as “extremists” anyone who attempts to protect their emails from the government’s prying eyes.

No less disconcerting are the rash of incidents in which undercover government agents encourage individuals to commit crimes they might not have engaged in otherwise. This “make work” entrapment scheme runs the gamut from terrorism to drugs.

Most outrageous of all are the asset forfeiture laws that empower law enforcement to rake in huge sums of money by confiscating cash, cars, and even homes based on little more than a suspicion of wrongdoing.

So who or what is to blame for this bureaucratic nightmare delivered by way of the police state? Is it the White House? Is it Congress? Is it the Department of Homeland Security, with its mobster mindset? Is it some shadowy, power-hungry entity operating off a nefarious plan?

Or is it, as Holocaust survivor Hannah Arendt suggests, the sheepish masses who mindlessly march in lockstep with the government’s dictates—expressing no outrage, demanding no reform, and issuing no challenge to the status quo—who are to blame for the prison walls being erected around us?

This is where democracy falls to ruin, and bureaucracy and tyranny prevail.

As I make clear in my book A Government of Wolves: The Emerging American Police State, we have only ourselves to blame for this bureaucratic hell that has grown up around us.

Too many of us have turned a blind eye to the government corruption, or shrugged dismissively at the ongoing injustices, or tuned out the mayhem in favor of entertainment distractions. Just as guilty are those who have traded in their freedoms for a phantom promise of security, not to mention those who feed the machine unquestioningly with their tax dollars and partisan politics. And then there are the government employees—the soldiers, the cops, the technicians, the social workers, etc.—who are “just following orders” and doing their jobs, whether that job is to arrest you, spy on you, investigate you, crash through your door, etc.

Then again, if we must blame anyone, blame the faceless, nameless, bureaucratic government machine—which having been erected and set into motion is nearly impossible to shut down—for the relentless erosion of our freedoms through a million laws, statutes, and prohibitions.

If there is any glimmer of hope to be found, it will be at the local level, but we cannot wait for things to get completely out of control. If you wait to act until the SWAT team is crashing through your door, until your name is placed on a terror watch list, until you are reported for such outlawed activities as collecting rainwater or letting your children play outside unsupervised, then it will be too late.