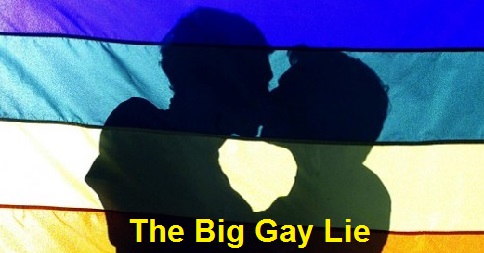 While gays are our siblings in Christ, the gay lifestyle is nothing like the straight lifestyle. That’s why we have to condemn the gay lifestyle because we love gays as people, just as we condemn smoking out of love for smokers.

One of the key reasons that gay “marriage” has won as much public support as it has is that few people understand how harmful the massively promiscuous gay lifestyle is.

The Big Gay Lie (BGL) is that the gay lifestyle is the same as the straight lifestyle. The BGL has a number of facets including:

• Lots of people are gay

• Gay relationships are just like straight ones; they want long-term commitment

• Being gay isn’t bad for your health

• Gays are born that way

The BGL has made the debate over gay marriage like a debate about smoking where no one realizes that smoking causes lung cancer.

Before looking at what scientific studies tell us here’s some anecdotal evidence that people may already be familiar with:

• When AIDS first struck gays fought tooth and nail to keep the bathhouses — where gays go for anonymous sex with strangers — open. Gays are so addicted to sex that even in the face of a fatal disease they didn’t want to curb their promiscuous lifestyle.

• AIDS. While we’re constantly told that it’s not a gay disease the reality is that in the U.S. almost no one but gays get AIDS from sex. Yet even though condoms don’t stop the spread of AIDS gays continue to risk their lives to have sex with strangers

• While everyone condemns crimes by priests and ministers against children, the fact is that 81% of the victims of priests have been young boys; the problem is a gay one.

• NAMBLA — which advocates sex with 3 year olds — is an accepted part of the gay community. The organization marched in the SF Gay Pride parade for years before pressure from straights got the organization booted out due to bad optics.

The debate about gay marriage has been skewed by a gross misrepresentation of the number of gays in America. While the average American thought 23% of Americans were gay the real number is 1.6% with only 3.8% of the population being LGBT.

The simple reality is that the gay lifestyle consists of sex with many strangers and few if any long term, let alone monogamous, relationships.

To put this in context, only 25% of heterosexual men have sex with more than 10 women in their lifetimes; women average 4.7 partners over their lives.

Gay relationships rarely last more than 2 years. A study of gay “marriages” in Holland found that they last, on average, 1.5 years and that they are not monogamous. Another study showed that not a single gay couple was monogamous for more than five years. Straight marriages are far longer lasting and much more likely to be monogamous.

This disparity isn’t surprising, given that men tend to be more promiscuous than women. A sexual relationship without a woman is hence likely to be based on sex, not love.

Basically what passes for love in gay relationships is really lust or infatuation. It’s not the sort of love that keeps a couple faithful and together for decades. Gays as people deserve better than that, but they will never find it if they follow their inclinations.

Being gay is very bad for your health:

Being gay cuts roughly 20 years off of a man’s expected lifespan; smoking only cuts 10. That’s not surprising given the AIDS epidemic but the basically unhealthy sexual practices of gays lead to death and illness from sources other than AIDS as well.

Additionally the gay community serves as a reservoir of other STDs due to the massively promiscuous nature of gay relationships.

Finally the nature of gay “sex” leads to a wide variety of other problems — nature has taught us to not play with feces for a reason.

Even a cursory examination shows it’s absurd to think that gays are born gay, that there is a “gay” gene. Evolution teaches that genes that help an organism survive and reproduce endure and genes that hinder survival or reproduction disappear. Yet what gene could possibly be worse for reproduction than a “gay” gene? Clearly any person with a “gay” gene wouldn’t have had kids and hence the gene would disappear from the gene pool.

This does not mean that gays wake up one morning and decide to be gay. Studies have shown that gays are very likely to come from families with detached or absent fathers. That makes sense; gays turn to sex with men to replace the love they never had from their fathers. After all, our society is great at confusing sex with love.

Given that being gay is not genetic it is likely that being gay is curable. While the MSM attacks any possibility of gays becoming heterosexual the reality is that cure rates of 30% or more may be possible for gays who want to be cured.

Moving beyond the BGL:

Why has the BGL been so successful? There are several reasons, but the primary one is that since gays are so rare, most people don’t interact with them that much; and when they do gays are unlikely to boast about their promiscuity. On the other hand the media, both news and entertainment, portray gays as being just like straights. Not only are the health, mental and physical, consequences of the gay lifestyle concealed but even the fact that gays are sex addicts is never mentioned.

It’s hardly surprising given the prevalence of the BGL that support for gay “marriage” is as high as it is.

Based purely on science, gays are defective since from an evolutionary perspective the only purpose of life is to produce offspring. It’s Christianity that teaches that gays are not defective only prone to a different kind of sin than most people. In fact, Christianity teaches that gays who live chaste lives are truly great servants of God for bearing a very heavy cross successfully.

Once the BGL is exposed it’s clear that the only truly loving response to gays is to urge them to seek a cure and to live chaste lives. Because our objection to the gay lifestyle is based on love it makes perfect sense to simultaneously condemn violence against gays, persecution of gays, and hatred for gays with efforts to encourage gays to not live the gay lifestyle.

The liberal response of encouraging the gay lifestyle is like encouraging smokers to smoke, fat people to eat more, or people who want to amputate their limbs to go right ahead. If you truly love someone you don’t enable them to do things that are self-destructive.

In reality, love-wins should mean encouraging gays to avoid the gay lifestyle not enabling them to live a lifestyle that cuts decades off their lives and involves the objectification of others as things to be used rather than people to be loved. Gays deserve better than that.

Use the truth to combat the BGL and you’ll find that people’s attitudes will begin to change — true love will win in the end.