The Christian View Of Abortion 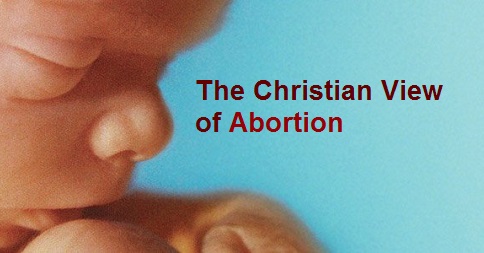 Since abortion was legalized in 1973, there have been over 40 million abortions in the U.S. alone. Abortion is legal, just as slavery was legal in the 1800’s. But, is it moral? What does the Bible say about abortion?

Nowhere in the Bible does it say “Thou shalt not abort your children.” Neither will you find specific words forbidding suicide, infanticide (killing newborn children) or same-sex marriages. Yet, the Bible clearly teaches us that these things are wrong.

A small, but noisy group of people (who are very active on the Internet) wish to have you believe that the Bible condones abortion. Although it doesn’t take a Biblical scholar to conclude that the Bible forbids abortion, it may help you to see the facts laid out.

Simply put, the Bible forbids killing innocent persons. If an unborn child is a person, abortion is prohibited by the Bible.

Let’s look at the evidence:

The Bible condemns the shedding of innocent life.

Few people would argue this point. The Bible clearly prohibits taking the life of an innocent person. It follows that if the developing baby is a “qualified” member of the human race, all of these scriptures apply:

Genesis 9:6 – Whoever sheds man’s blood, by man his blood shall be shed, for in the image of God He made man.

Deuteronomy 27:25a – Cursed is he who accepts a bribe to strike down an innocent person.

Proverbs 6:16-19 – There are six things which the LORD hates, yes, seven which are an abomination to Him: haughty eyes, a lying tongue, and hands that shed innocent blood…

A child is a “person” whether born or unborn.

The Bible consistently uses the same word for a “born” or “unborn” baby. This is because the divine Author of the Bible did not recognize a material difference between the two. In Scripture, there is not some special event when a “human being” becomes a “person”. Rather, he or she is a person from the beginning who goes through growth and development both inside and outside of the womb.

In the New Testament the Greek word “brephos” is used to describe the unborn, newborns and youth. In Luke 1:44, the word is used to mean unborn baby: “For behold, when the sound of your greeting reached my ears, the baby leaped in my womb for joy.” Then, in Luke 2:12, it means a newborn: “So they came in a hurry and found their way to Mary and Joseph, and the baby as He lay in the manger.” And in Luke 18:15, “brephos” refers to a young child: “And they were bringing even their babies to Him so that He would touch them, but when the disciples saw it, they began rebuking them.”

In the Old Testament the Hebrew word “yeled” is used in the same way. In Exodus 21:22 it means an unborn child, “If men struggle with each other and strike a woman with child so that she gives birth prematurely…”. And yet, in other Old Testament usages, it means “youth” or even a teenager.

As late as the 16th century in our own culture, “child” was the word used for both the born and unborn baby. Late in the game, we have developed a new word, “fetus”, to describe a developing baby (even this word is defined in some dictionaries as an “unborn human being”). Today, we often reserve the word “child” for a person already born.

In the Bible, our worth as a human being or our “personhood” does not depend on how far along on life’s journey we have come. Instead, we are beings who are made in the image of God (Gen. 1:27). Each person is valuable because God created him or her that way. It doesn’t matter whether a person is still in his mother’s womb, a newborn, a toddler, an adolescent, or a senior citizen.

Only quite recently has the concept of “personhood” surfaced. There are some in our society who want to find a developmental stage where they can justify that the fetus is only a collection of organs, not really a person. Carl Sagan put that fetal stage at perhaps 6 months, when the cerebral cortex is in place. Only then, he feels, should we confer “personhood” on a fetus.

Such ideas are clearly subjective. It would seem that these discussions of personhood only arose from a need to justify the act of abortion. Certainly, they are not expressed in the Bible. Quite to the contrary, the Bible story shows that “personhood”, or reaching one’s full potential, comes from knowing God. A person develops and is preserved through his communion with a personal God who reveals Himself to us in love. The Bible consistently links our “personhood” to the time we are formed (conception), or even before in God’s “mind”.

According to the Bible, God knew you before you were born.

Psalm 139:13-16. For You formed my inward parts; You wove me in my mother’s womb. I will give thanks to You, for I am fearfully and wonderfully made; wonderful are Your works, and my soul knows it very well. My frame was not hidden from You, when I was made in secret, and skillfully wrought in the depths of the earth; Your eyes have seen my unformed substance; and in Your book were all written the days that were ordained for me, when as yet there was not one of them.

Luke 1:15. For he will be great in the sight of the Lord; and he will drink no wine or liquor, and he will be filled with the Holy Spirit while yet in his mother’s womb.

Jeremiah. 1:5. Before I formed you in the womb I knew you, and before you were born I consecrated you.

Before we are even formed in the womb, God knows us. He knows how each day of our lives on earth will unfold. His love and care go with us throughout life.

One of the reasons that the Bible does not contain specific references to abortion is because the prohibition was completely covered in “Thou shall not murder”. Israelites well understood this to mean killing by sword, by strangulation, by poison, by abortion, and by all other means.

Later, as the church began to spread to the Gentile cultures that did not share the Israelite traditions, specific prohibitions were written. Church leaders and others consistently forbade the practice of abortion based upon their understanding of the Bible. Below are examples:

“Thou shalt not slay the child by procuring abortion; nor, again, shalt thou destroy it after it is born” (Letter of Barnabas 19 from 74 AD).

“…And these were the accursed who conceived and caused abortion” (The Apocalypse of Peter 25, 137 AD).

“You shall not procure abortion, nor destroy a newborn child” (Didache 2:1 from 150 AD).

“There are some women among you who by drinking special potions extinguish the life of the future human in their very bowels, thus committing murder before they even give birth.” (Mark Felix, Christian Lawyer, Octavius chap. 30 from 170 AD).

“The law of Moses, indeed, punishes with due penalties the man who shall cause abortion (see Ex. 21:22) Tertullian, 210 AD.

“Now we allow that life begins with conception because we contend that the soul also begins from conception; life taking its commencement at the same moment and place that the soul does” (Tertullian, Apology 27 from 210 AD).

“Women also who administer drugs to cause abortion, as well as those who take poisons to destroy unborn children, are murderesses.” (First Canonical Letter from 374 AD).

“The law, moreover enjoins us to bring up all our offspring, and forbids women to cause abortion of what is begotten, or to destroy it afterward; and if any woman appears to have so done, she will be a murderer of her child, by destroying a living creature, and diminishing humankind.” (The Works of Josephus, Flavius Josephus Against Apion, Book II, 25).

“Some go so far as to take potions, that they may insure barrenness, and thus murder human beings almost before their conception. Some, when they find themselves with child through their sin, use drugs to procure abortion, and when, as often happens, they die with their offspring, they enter the lower world laden with the guilt not only of adultery against Christ but also of suicide and child murder” (Jerome, Letters 22:13 from 396 AD).

How should Christians respond?

It is one thing when Godless, secular people try to dehumanize the unborn to support their view of abortion on demand. It is quite another matter when these same people attempt to distort scripture and church history to fit their agenda.

There is not a legitimate “pro-choice” position that can be derived from the Bible. To support this position, it would be necessary to use text out of context, ignore the Bible’s attitude toward the young and innocent, and be ignorant of the history and tradition of the church.

God calls each of us to defend the innocent. Christians should elect leaders who share the Biblical view of abortion, support groups working to make abortion unacceptable in our country, and donate their time and money to pregnancy care centers. Every Christian should know the facts and their Christian heritage, and be ready to defend what the Bible really does say about abortion. And we should pray that God will change the hearts of those promoting the genocide of our nation.