The Gay Agenda Reaches Houston in Move Against Pastors 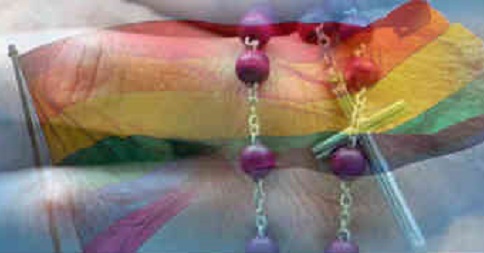 If you dare oppose the gay agenda, you will be destroyed. Progression of the gay agenda will only become more intrusive, more tyrannical, and more Orwellian.

To Christians, homosexuality is an unacceptable behavior to God, as well as to Christ’s Flock. Since the dawn of the Christian Church a couple thousand years ago (and prior during the Old Testament era), homosexuality has been taught to be an affront against God. Scripture reveals that homosexuality was a part of the reason for the destruction of Sodom and Gomorrah, and a sign of the perverse evil Earth’s inhabitants had turned to during the days preceding the Great Flood that Noah and his family escaped by building an ark.

As the gay agenda began to use government to try and force the normalization of homosexuality upon America, using the threat of law against any who dared to oppose the gay rights movement, we have seen businesses targeted for daring to stand on their Christian principles against the tyrannical use of government for the purpose of preferentialism, and States like California going so far as to mandate that homosexual history is taught in the public schools, with the requirement that the practice be done so by teachers in a positive manner, regardless of their opinion of the sexual perversion.

The drive to legalize gay marriage in every State began pushing for a government mandate on the definition of marriage, where federal judges have overturned the vote of the people, and their representatives, in State after State on an issue the federal government has no constitutional authority over. The homosexual agenda has used the press, infiltration of churches, and the entertainment industry, in addition to political ploys, to convince the younger generation that not only is the acceptance of the gay agenda inevitable, but that to oppose the agenda is immoral and a form of bigotry.

Early on, I wrote that the natural progression of this sinister agenda, because of its authoritarian nature in the sense of how implementation of the normalization of homosexuality is being pursued, would lead to the bankruptcy of business owners that dare to oppose the agenda, and eventually the government not only forcing churches to conduct gay weddings, but government monitoring of sermons by pastors inside the four walls of their churches to make sure they are not opposing the gay agenda.

And the expected tyranny that accompanies such issues like homosexuality has come to pass.

When a Christian-owned bakery refused to bake a cake for a gay couple, rather than respect the business owner’s religious right to refuse service to anyone they desire, and for the gay couple to simply pursue their cake baking requirements at some other bakery, the targeted owners decided to fight back against the lawsuit brought upon them for daring to stand up for their religious values. The result is that the homosexual agenda, using government force, and activist judges, have destroyed the entrepreneurial dreams of the owners of the bakery, and has forced them into bankruptcy.

The message is clear. If you dare oppose the gay agenda, you will be destroyed.

When I first began writing about these possibilities, a gay troll that used to visit Political Pistachio commented that such things would never happen. Homosexuality would never force pastors to preach in favor of homosexuality, or be shut down. Monitoring sermons is just not something that could happen in the United States.

My commenter was wrong.

Houston has elected its first gay mayor, and the lesbian has been an intricate part in doing exactly what my Dallas Troll named Tom claimed would never happen.

Tom was the same guy that told me the Obama administration would never pursue gun control, and criticized me to for writing that such a thing was possible, too. Tom is batting a thousand.

Right now the city of Houston’s attack against pastors that dare to preach against homosexuality has emerged as an issuance of subpoenas demanding a group of pastors turn over any sermons dealing with homosexuality, gender identity or Annise Parker, the city’s first openly lesbian mayor.

Ministers who fail to comply could be held in contempt of court.

Daring to disagree with the Mayor on homosexuality, it turns out, is being treated like it is a crime.

Remember, this is the same Houston leadership that passed a non-discrimination ordinance, allowing men to use the ladies room and vice versa. The city council approved the law in June.

The Houston Chronicle reported opponents of the ordinance launched a petition drive that generated more than 50,000 signatures—far more than the 17,269 needed to put a referendum on the ballot.

However, the city threw out the petition in August over alleged irregularities.

After opponents of the bathroom bill filed a lawsuit the city’s attorneys responded by issuing the subpoenas against the pastors.

The pastors were not even a part of the lawsuit.

The pastors in question dared to be a part of a coalition of some 400 Houston-area churches that opposed the ordinance.

Mayor Parker has not explained why she wants to inspect the sermons. Her spokespeople have simply commented that the Mayor’s Office won’t comment on litigation.

An attorney representing the pastors said he suspects the mayor wants to publicly shame the ministers. He said he anticipates they will hold up their sermons for public scrutiny. In other words—the city is rummaging for evidence to “out” the pastors as anti-gay bigots.

That is what the gay agenda is all about. Accept their perversion as normal, or you will be forced to comply by government force. Hiding behind religious freedom, according to the militant gays, will not protect you. Freedom of speech and actions for them, not you.

How dare you oppose the homosexual Reich.

The next progression will be churches shut down for daring to speak out against homosexuality. Then it will become a crime to exhibit any language, or wear any clothing, that dares to oppose the gay agenda. Free Speech regarding any opposition to homosexuality will be silenced as criminal, and an act of sedition against the state.

Militant homosexuality uses tactics of bullying, and legal warfare. Political Correctness is not enough. Using the court to overturn the vote of the people in their States is not enough. Now, the shock troops will begin to silence any who dare to oppose homosexuality through the force of law that would be considered Hitleric in any other legal setting.

Remember, I was told I was being ridiculous the last time I declared where the progression of the homosexual agenda was headed, and it turned out I was right.

Tyranny is predictable, and the tyranny of the gay agenda’s progression has already been written.

When the Bible is labeled as hate speech, and you must hide your Bible in a safe because of the gay agenda, remember this: We were warned.

We must stand against these kinds of tactics now, or the progression of the gay agenda will only become more intrusive, more tyrannical, and more Orwellian.