The Johnson Amendment and the Agenda to Silence Christians 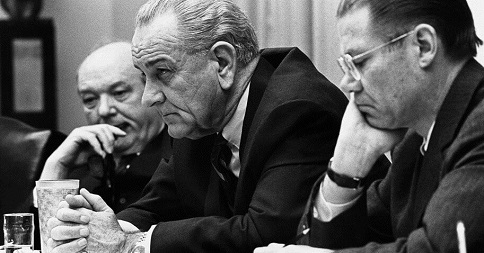 Attacks on religious freedoms and on the speech of Christians in America did not just appear in the last several years. The attempted muzzling of Christian churches and religious groups has gradually increased since a pivotal law was passed by a shrewd politician to intimidate people of faith. The repercussions have been devastating.

The 1954 Johnson Amendment passed by Congress stated that non-profits (read: Christian churches and organizations) could not speak in favor of any political candidate. Was this even constitutional?

This key but forgotten event, the passage of this amendment, paved the way for the increased squelching of free speech; and because of the confusion and misinformation distributed about the law, many religious leaders have been unnecessarily self-censoring themselves for decades.

The following is an excerpt from the chapter titled “The Separation of Christianity and State” in the book The Cost of Our Silence:

Texas Democrat Lyndon B. Johnson was a powerful politician running for reelection as Senator; but two anti-communist, tax-exempt groups were opposing him and passing out literature during the campaigns. He contacted the IRS and found the group’s activity was legal, so he sought other options to fight them.

Johnson shrewdly appeared on the Senate floor on July 2, 1954 and offered his amendment to a pending, massive, tax code overhaul bill. The bill was supposed to modernize the tax code. Records indicate an absence of committee hearings on the amendment. No legislative analysis took place to examine the effect the bill and the amendment would have, particularly on churches and religious organizations. The amendment was simply created to protect Johnson.

The Johnson Amendment was passed by Congress as an amendment to section 501(c)(3) of the federal tax code… stating entities that are exempt from federal income tax cannot “Participate in, or intervene in (including the publishing or distributing of statements), any political campaign on behalf of – or in opposition to – any candidate for public office.”

The Left uses this to bully Christian pastors and groups with threats of losing their nonprofit status should they dare talk about the Bible as it relates to cultural, political, fiscal, and social issues, which all fall under the category of moral issues.

Erik Stanley, author and Senior Legal Counsel of the Alliance Defense Fund, explained the Johnson Amendment was a bill that got inserted into the tax code through back-room deals made by a powerful Senator seeking reelection at any cost. As a result of the bill, freedom of speech and the free exercise of religion have been trampled. Stanley stated:

We have grown up with a generation of churchgoers that believe it is illegal for their pastor to address candidates and elections in light of Scripture or church doctrine when there is no valid justification for believing that.

Johnson knew how to use the political process to silence his enemies. The new amendment not only protected him from the conservative nonprofit groups opposing him, but many pastors stopped speaking about any issue from the pulpit that might be deemed political either out of ignorance of the new law or out of fear. By this self-censoring, the church has chosen to ignore open immorality in culture and in government while at the same time neglecting to call attention to those political leaders who do strive to live according to Christian morals and values.

One might conclude Lyndon B. Johnson not only silenced America’s churches, his legislation has turned many of them into agents of the state. What about labor unions, liberal churches, and leftist organizations? Why have many of them apparently been allowed to not only endorse and support political candidates, but openly fund their campaigns? This is the hypocrisy of selective law enforcement by the (in)Justice Department and the IRS, a partisan government agency recently exposed in the targeting of conservative groups…

Have we also hesitated to address the severe persecution of our Christian brothers and sisters around the world due to radical Islam? I have to believe we all care about Christian suffering and the fact millions have lost their lives because of their faith in Jesus Christ. What I also want to believe is that religious leaders in America are not afraid to talk about why this is happening.

In an article for American Thinker, Bill Warner wrote about persecution in Islamic nations “caused by Muslim jihadists who are following the Islamic doctrine of jihad against the Christian as found in the Koran, Sira, and Hadith.” Warner points to pastors and church leaders who have become comfortable operating their churches more like 501(c)(3) institutions that have meetings on Sunday. They have a corporate mentality which he believes is one of the reasons for the denial of Christian suffering.

If you are willing to see the doctrinal roots of the ongoing murder of Christians by Muslims, then you might have to speak about it from the pulpit, and that could be seen as political speech. In spite of the fact that there has never been a 501(c)(3) revoked because of political speech by a minister, the imagined loss silences ministers. Hmmm… if a minister is worried about the IRS revoking his 501(c)(3), then whom is the minster serving? Caesar or Christ?

Are these harsh words any less true of at least a small number of religious leaders in America? If your pastor resembles more of a business person or CEO than a military leader preparing his troops for battle, it may be time to approach him in love and encourage him to address persecution, sin, the culture war, and politics from time to time.

Because many misunderstand why politics were supposedly forbidden in church, some Christians have mistakenly assumed that the process of voting and electing America’s leaders is either unbiblical or unimportant. Only about 25 percent of Christians vote in elections today. Some pastors do talk about their own obligation to impact society by equipping the saints, and do address the controversial issues of today. We need to pray for and rally around Christian leaders such as these.

Though the Establishment Clause of the First Amendment will continue to be wrongly applied to cases involving religion, we can help by raising awareness. We can also elect representatives who revere the Bible they place their hand on when taking their oath of office. Enemies of Christianity and of America have become emboldened, and people of faith need to be reminded we are provided the freedom of religion and its expression under the Constitution.

Our ultimate allegiance and responsibility however, is to the Word of God.

The truth is churches have a tremendous amount of freedom. From the pulpit, actual limitations include: Pastors cannot openly endorse a particular candidate, tell people whom to vote for, or contribute church money to a campaign. A pastor is absolutely free to do so as an individual outside the church. Pastors, churches, and nonprofits can lawfully speak in detail about all biblical issues. They may also quote any Scripture in the Bible, discuss unethical abortion funding and the protection of marriage, and distribute voter guides and information as well as register folks to vote. Churches can invite politicians to come in and speak to their congregations as long as they extend an invitation to both parties.

I do understand the concern some pastors have about mixing religion and government, but we cannot divorce our faith from our politics. If we do, we’d have to leave Jesus at home or outside when we enter the voting booth if that were even possible. Politics affect many areas of our lives, and the Bible has answers and instructions for every single one. Christians must have a voice when it comes to who is elected, what policies get promoted, and which laws get passed.

Someone’s legislation and worldview will surely be enacted and enforced in America – so will it be those who oppose Christianity or those who support it?

Are we willing to remind and inform this generation about who we are and what America once was? Are we willing to speak the truth about Christ and culture no matter how unpopular we may become? The nation has not yet declined to a point of total ungodliness and destruction, and our government needs our prayers and our participation to generate a revival. Concerned Christians must unite again. Every believer should see the need to speak up with a sense of urgency whether you are a parent, a pastor, or a person in the public square.

The Reverend Don Wildmon, founder of the American Family Association, has been instrumental in fighting for the family and Christian values in our country. He wrote the following over ten years ago:

Today, 4,000 innocent precious lives of unborn babies were snuffed out . . . And 300,000 pulpits are silent . . . The networks make a mockery of Christians, the Christian faith and Christian values with nearly every show they air. Greed, materialism, violence, sexual immorality are standard fare. Program after program, movie after movie contains anti-Christian episodes and plots. News articles condescendingly refer to the “fundamentalists, right-wing Christians.” Those who speak out for the sacredness of life are branded as extremists. And 300,000 pulpits are silent.

Perhaps your pastor or church leader has in fact been speaking out on these and many other problems in our society. Thank him and encourage him! You are blessed to have him and the church in America needs more like him. Our hope is for Christian leaders to do what Dietrich Bonhoeffer and the Confessing Church in Germany chose to do; put the Word of God above all things. We must not have any gods besides the one true God. Real faith cannot be silenced by government orders.

If we do nothing and the majority remains silent, the secular progressives win. Then, with God removed from all aspects of American society, they will be the ones to rule, deciding what is right and wrong, true and false, moral and immoral.

As the great Reverend Charles Finney once said,

“God will bless or curse America depending on the course Christians take in politics; they must vote for honest men and take consistent ground.”

We have been losing ground because Christians have not first been firmly established in their faith, and second; we have not been openly preaching and living the Word of God without compromise. I admit my past failures in this area and have confessed them to the Lord; how about you?

The most important thing is not winning battles for culture or country, but winning eternal battles for the kingdom of God. To win the souls of men, the whole truth of the whole gospel must be proclaimed. True Christianity cannot be confined behind the walls of any church.