Home Homosexuality The LGBT Movement vs. Reality And Christianity

The LGBT Movement vs. Reality And Christianity 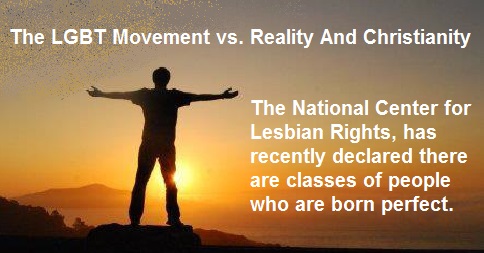 Time was any person who declared himself perfect invited ridicule along with a suggestion he have his head examined.

But those days apparently are long gone, at least according to the National Center for Lesbian Rights, which has recently declared there are classes of people who are born perfect, whose sexual and gender choices are infallible and therefore not to be subjected to anything resembling criticism, much less “conversion therapy.”

A few years ago, NCLR began a campaign to end all conversion therapy, believing that attempts to change any youth’s sexual orientation or choice of gender invited irreparable psychological trauma, as such choices were inherently infallible. Consequently, NCLR and similar organizations began a campaign to outlaw all conversion therapy. The organization issued a statement:

“We believe that every LGBT child is born perfect and that any young person’s identity as lesbian, gay, bisexual, or transgender should be honored, celebrated, and supported. We are committed to ending these dangerous and stigmatizing practices across the country once and for all — relegating them to the dustbin of history, and ensuring every child knows they were #Born Perfect.”

The idea that human beings are born perfect and therefore the choices they make are beyond reproach and are not to be subject to criticism or persuasion to change is a very dangerous thought.

It is an idea dangerous to the LGBT community itself as well as to those who don’t belong to that community. All of us humans need to remember Aristotle’s dictum “The unexamined life is not worth living.” In other words, self-examination and examination by others is what makes each of us more human, not less. Not to permit persuasion or criticism and to claim perfection as a given is to invite distortion of one’s very being. Quite simply, none of us are perfect nor are our choices infallibly correct. The LGBT movement should be very cautious in its proclamations of perfection, for by so doing, it declares itself beyond introspection or criticism by others. Questions such as “Am I and are we wrong in any way?” should be but are never even floated by perfect people.

Further, to demand any young person’s chosen identity should be “honored, celebrated and supported” essentially is to demand worship from the rest of us decidedly flawed mortals. It is to declare “I’m OK, but you aren’t.” It is to say, “I am without sin; and if you disagree, you are a hateful person who deserves punishment by fire.” It is to say “What I say and do is beyond debate,” and if you disagree, your life is forfeit. It is to surrender to the ideas that have always animated tyrants; to become like the perfect and perfectly tyrannous King Nebuchadnezzar of Babylon, who upon seeing three Jewish youths who refused to bow down, “honor, celebrate and support” and worship him and his god demanded the young men be incinerated.

History reminds us that it is self-proclaimed perfect men and women who have wrought the most carnage on their flawed fellow human beings. Maniacs who believed themselves and their vision for humanity beyond reproach or even persuasion and criticism turn out to be tyrants who think nothing of silencing or even eliminating the imperfect people who do not agree with them. However tiresome it may seem to repeat some of history’s lessons, it is still salutary to recall the idea of the perfect Aryan race resulted in the deaths of millions. The idea of the perfect communist man resulted in imperfect classes of people being sent to the gulag to be tortured, starved, and worked to death.

How did the leaders of organizations such as NCLR get to the point of declaring themselves born perfect? What intellectual trends support their declaration of perfection? Further, what pressures are being and will be brought to bear on those who know through common sense observation and who therefor do not believe anyone is born perfect and that all mankind is in need of persuasion to change; who believe conversion and being born again is essential for the entire sinful human race; namely, Christians and the Church universal?

It has been gradual and radical secularization of certain Reformation doctrines that led some to the point of believing that self-proclaimed identity is infallible. Behind the self-proclamation of Elizabeth Warren that she is a Cherokee Indian; Rachel Dolezal’s insistence she is black and that race is only a social construct; and Bruce (Caitlyn) Jenner’s belief he is a woman is a radical distortion of the deeply religious belief that one’ conscience is ultimately responsible to God alone.

The LGBT movement is at least partly due to the unintended effects of the Protestant Reformation, particularly the secularization of the Protestant doctrine of Sola Scriptura; that is that the Bible alone was the standard. But individual interpretations of the scriptures divorced from tradition and the history of the Church resulted in a splintering into Protestant hyperplurality. The constant splintering due to varying interpretations of scripture divorced from Christian tradition and history and subject only to individual human will resulted in increasingly unorthodox and unsustainable interpretations.

What happened was that secularists saw soon enough that assertion of the authority of human will did not have to have the backing of scripture, as bible verses separated from the authority, tradition and history of the Church could mean anything an individual meant it to be. The secularized interpretation of the doctrine of sola scriptura coupled with the accompanying secularization of the idea that every human being is responsible to God alone led to the idea that each person could interpret for him or herself the meaning of the world and of what it meant to be human. Why bother with scripture or the Church at all?

The result: Sola scriptura devolved into sola me.

Everyman, once characterized by late medieval theologians as requiring divine salvation, was gradually secularized, needing no guide to life other than himself.

For the secularist, John Bunyan’s Christian pilgrim needlessly staggered through life with his burden of sin, looking for salvation.

For the secularist, any traveler through life could be guided solely by the secular trinity of Me, Myself and I. The individual alone had the right and authority to interpret reality, including the reality of one’s self. I could save myself. I also could declare myself to be anything I wanted to be.

Thus the Reformation doctrine of everyman as a priest and everyman as answerable to God alone morphed into the secular idea that everyman is a god. Complete autonomy meant the supremacy of the human will at any particular point in time. It also meant the denial of history and tradition, which in turn led to the repudiation of hierarchy and authority. Hence the anarchism and nihilism we currently find on college campuses and within our cities. Hence — unless rectified — the collapse of Western civilization, as infallibility of individual human choice means anyone and everyone can declare him or herself above any law, human or divine.

In sum, the Left and its vanguard movement is a religion that advocates the total triumph of the human will, even over reality. Since not everyone’s will can triumph without complete disintegration of all societal structures; a few power players would discern what is the collective will and enforce it, inventing “rights” to achieve a transformation of a society. The real issue, then, is not the will or rights of individual transgenders or others who are disaffected, but the will of those behind it to assert power over entities resisting fundamental transformation.

The new ideology of the triumph of the will is essentially related to the fascist and communist movements that have preceded the current attempts at fundamental transformation. The power plays are the same; namely, the obliteration of all hierarchies, all institutions, histories, nations, and classes that are deemed enemies opposed to the new definition of reality.

Such a viewpoint Inevitably results in tyranny, as those who oppose the perfect will of the self-anointed gods are viewed as attacking the new gods and therefore intrinsically hateful and worthy of severe punishment. It starts small: Here a butcher; there a baker; there a calligrapher or candlestick maker. But small persecutions are turning into a mighty tide of resistance against the Church itself, which is in the business of conversion of sinful humans and therefore anathema to the intrinsically perfect. For two thousand years (and two thousand years before that when one adds the observations of the Jewish prophets), the Church has realized all human beings are imperfect and are in need of salvation. The Church offers the message of redemption to sinners through belief in the salvation provided through the sacrifice of Jesus Christ. It offers a new birth; a chance to be born again.

The orthodox Church has always repudiated Jean Jacque Rousseau’s idea that humans are born perfectly good and are merely corrupted by society. It repudiates his idea that sentiment (feeling) trumps reality. The Church traces the fault in mankind back to the Fall of Adam and Eve, believing the first perfectly good human being was ruined by the sin of rebellion against God; but that mankind can be redeemed. Christianity puts the finger on the heart of every human being, declaring along with the prophet Isaiah that we like sheep have all gone astray but that God has laid on Christ the iniquity of us all.

By going full bore Rousseau, as has the entire so-called “enlightened” Left for at least several centuries or more, organizations such as the NCLR have placed themselves squarely against orthodox Christianity and its foundational beliefs. They have declared war against the Church and thus the moral and spiritual foundations of Western civilization. Christians can expect the war to intensify.

In response, some within the Church have capitulated to the ideas of Rousseau and other “enlightened” secularist thinkers. The result, Reinhold Niebuhr wrote, has been the acceptance of the secular doctrines that humans are just fine as they are and so do not need conversion therapy: “A God without wrath brought men without sin into a Kingdom without judgment through the ministrations of a Christ without a Cross.”

A new Reformation of the Christian Church would and should reclaim the gospel news that all of us imperfect people may be redeemed and reborn perfect because of the love and sacrifice of the only perfect human who ever lived; Christ, the Son of Man and Son of God.