Home Enemies Foreign and Domestic The Road to Hell Obama is taking the world down created by U.S. Catholic Bishops

The Road to Hell Obama is taking the world down created by U.S. Catholic Bishops 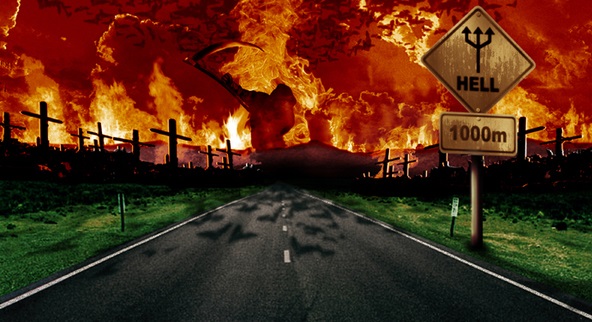 The Catholic Church—through the U.S. Conference of Catholic Bishops’ Committee on Migration—both paved the road for Barack Hussein Obama’s ultimate takeover of Free West society and continues to actively enable the Fundamental Transformation of America by sinking the US in a tsunami of illegal aliens.

In coming to Obama’s aid in erasing forever America’s borders, the bishops sold the USA out, including its Catholics, for the proverbial 30 pieces of silver.

In biblical terms, Obama and the Catholic bishops—who both birthed his progress to the seat of power and back him on his Fundamental Transformation mission—are in in league with the devil. The certain-to-come protestations of the bishops should fall on the same deaf ears they use to shun all pleas of mercy from Americans overwhelmed by invaders in their home towns and cities.

How dare these phony paragons of the pulpit ascribe to our Savior the manufactured invasion of America by millions of U.S. government made-to-order ‘refugees’?

It’s a crock that the bishops are saving illegal aliens rushing the U.S. border based on lofty claims of altruism or charity, when they are doing it for power and filthy lucre:

In the case of the Catholic Charities Diocese of Galveston, $15,549,078 in federal grants from Health and Human Services for “Unaccompanied Alien Children Project” with a program description of “Refugee and Entry Assistance”. (Eric Odom, Liberty News July 10, 2014)

“Last year, the Catholic Charities Diocese of Fort Worth received $350,000 from Department of Homeland Security for “citizenship and education training” with a program description of “citizenship and immigration services.”

Between September 2010 and September 2013, the Catholic Charities of Dallas received $823,658 from the Department of Homeland Security for “Citizenship Education Training” for “refugee and entrant assistance.”

It is no coincidence that the vice president of the United States Conference of Catholic Bishops is his Eminence Cardinal Daniel N. DiNardo, Archbishop of Galveston-Houston and that the Conference Treasurer is the Most Reverend Kevin J. Farrell, Bishop of Dallas.

In fact, the Obama administration was bankrolling America’s churches back in 2010, and the tens of millions were flowing into church coffers to prepare for the invasion of America now underway.

Nor do protestants get a free ride in the bankrolled by Obama category with the Baptists taking government grants: From Dec 2012 to January 2014, Baptist Child & Family Services received $62,111,126 in federal grants from Health & Human Services for “Unaccompanied Alien Children Program”. (Liberty News)

Now infamous for his ‘I’ve got a pen, and I’ve got a phone’ boast, the one fact Obama plays close to his chest is that he’s got some Catholic bishops and Baptist pastors in his back pocket.

The Catholic compliance that propelled Obama from the streets as a malcontent community organizer to the Oval office begins and continues with the Catholic Church.

No one has documented the trail more effectively than spunky Michael Voris, of ChurchMilitant.TV, formerly RealCatholicTV.

Who ever would have thought that the road to America’s destruction would be made a grim possibility through a host of Catholic priests and bishops?

It’s a story that should make you shudder because it’s how Barack Obama captured America like the proverbial fox in the henhouse.

Long in the telling, it takes patience to read:

“In the 1930s, Alinsky met the Meegan brothers, Joseph and Peter. Joseph introduced him to the Chicago Bishops and to his brother, Fr. Peter Meegan, who in turn introduced Saul to Aux. Bishop Bernard Sheil. Meegan and Sheil introduced Alinsky to the inner workings of the Catholic Church.” (Colorado Coalition for Life/Michael Voris, Feb. 18, 2012). “During this time, Saul organized his first community project called the “Back of the Yards Neighborhood Council”. At this point, Alinsky pulled off his greatest coup and garnered the Bishops’ public seal of approval. He convinced Aux. Bishop Sheil to join John L. Lewis, the head of the CIO (eventually known as the AFLCIO), on stage. At that moment the Catholic Church and the labor unions entered into an unholy partnership.

“Msgr. Jack Egan teamed up with Alinsky, and in time, Egan was affectionately known by the Chicago press as “Alinsky’s priest intern”. Egan promoted Alinsky so well that he was more popular among Catholics than the bishops. Through the ‘40s, ‘50s, and ‘60s, Egan and Alinsky developed a well oiled network of priests and bishops throughout the United States. In 1968, newly appointed Cardinal Cody realized that what Msgr. Egan was doing was not in line with Catholic doctrine and closed his office.

“Fr. Ted Hesburgh invited Msgr. Egan to Notre Dame for a sabbatical. He remained at Notre Dame for the next 14 years where he continued to develop his priest’s network. Egan periodically brought priests to the Catholic Mecca for conferences under the liberal eye of Hesburgh. Egan was now in mainstream Catholic life.

During Egan’s time at Notre Dame in the late ‘60s, race riots broke out around the country. A document called Black Manifesto was published which called for reparations for African Americans. The Catholic Church chose Msgr. Jack Egan and his network of priests to come up with plans to alleviate poverty. All of Egan’s priests, save one, were personally trained by Saul Alinsky in the tactics laid out in his book, Reveille for Radicals. This opportunity allowed Egan’s network of priests to implement Saul Alinsky’s radical community organizing tactics of gaining power and strength from the people and using it to empower and enlarge government.

“In a few months, the network created the “National Crusade Against Poverty” (NCAP) and committed to raise 50 million dollars over several years. The campaign should have raised the money and dissolved. It did not, and in fact, it is still in existence today under the name of the “Catholic Campaign for Human Development”. The CCHD has raised over $289,000,000 in 40 years, and by donating to the radical left, they have gained immense power in the abortion and homosexual communities.”

Anyone reading this who doesn’t feel a shiver down the spine when recalling that Obama successfully had authorities at Georgetown cover all religious symbols when he made his 2009 commencement speech there, isn’t awake.

“He was there to pay tribute to his mentors in community organizing. To pay tribute to those who helped put him in office. In his speech he mentioned his high regard for Cardinal Bernardin, who spoke at one of the first organizing meetings he ever attended.” (Michael Voris).

This is the real, little known trajectory Obama took into the Oval Office.

After four years living in New York City, Obama moved to Chicago to work as a community organizer. He worked for three years from June 1985 to May 1988 as director of the Developing Communities Project (DCP), a church-based community organization originally comprising eight Catholic parishes in Greater Roseland (Roseland, West Pullman, and Riverdale) on Chicago’s far South Side. During his three years as the DCP’s director, its staff grew from 1 to 13 and its annual budget grew from $70,000 to $400,000, with accomplishments including helping set up a job training program, a college preparatory tutoring program, and a tenants’ rights organization in Altgeld Gardens. Obama also worked as a consultant and instructor for the Gamaliel Foundation, a community organizing institute. (Wikipedia)

The rest, as they say, is history. Make that history of the most tragic kind.

Meanwhile, the road to hell Obama is taking the world down was created for him by radical priests and bishops of the Catholic Church.