Home Police State There Will Be No Second American Revolution: The Futility of an Armed Revolt

There Will Be No Second American Revolution: The Futility of an Armed Revolt 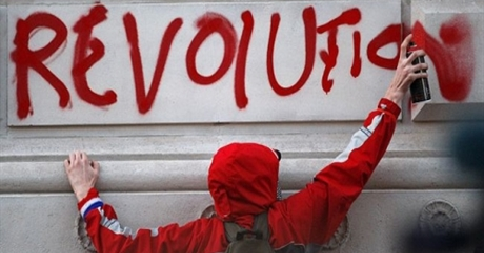 where can i buy accutane uk “A standing military force, with an overgrown Executive will not long be safe companions to liberty.” — James Madison.

America is a ticking time bomb.

All that remains to be seen is who—or what—will set fire to the fuse.

We are poised at what seems to be the pinnacle of a manufactured breakdown, with police shooting unarmed citizens, snipers shooting police, global and domestic violence rising, and a political showdown between two presidential candidates equally matched in unpopularity.

The preparations for the Republican and Democratic national conventions taking place in Cleveland and Philadelphia provide a foretaste of how the government plans to deal with any individual or group that steps out of line: they will be censored, silenced, spied on, caged, intimidated, interrogated, investigated, recorded, tracked, labeled, held at gunpoint, detained, restrained, arrested, tried and found guilty.

Make no mistake, the government is ready for a civil uprising.

Indeed, the government has been preparing for this moment for years.

Subsequent reports by the Department of Homeland Security to identify, monitor and label right-wing and left-wing activists and military veterans as extremists (a.k.a. terrorists) have manifested into full-fledged pre-crime surveillance programs.

Meanwhile, the government has been amassing an arsenal of military weapons for use domestically and equipping and training their law enforcement and administrative “troops” for war. There are now at least 120,000 armed federal agents carrying such weapons who possess the power to arrest.

Rounding out this profit-driven campaign to turn American citizens into enemy combatants (and America into a battlefield) is a technology sector that is colluding with the government to create a Big Brother that is all-knowing, all-seeing and inescapable.

All of this has taken place right under our noses, funded with our taxpayer dollars and carried out in broad daylight without so much as a general outcry from the citizenry.

It’s astounding how convenient we’ve made it for the government to lock down the nation.

The events of recent years—the invasive surveillance, the extremism reports, the civil unrest, the protests, the shootings, the bombings, the military exercises and active shooter drills, the color-coded alerts and threat assessments, the fusion centers, the transformation of local police into extensions of the military, the distribution of military equipment and weapons to local police forces, the government databases containing the names of dissidents and potential troublemakers—have all conjoined to create an environment in which “we the people” are more distrustful and fearful of each other and more reliant on the government to keep us safe.

Of course, that’s the point.

The powers-that-be want us to feel vulnerable.

They want us to fear each other and trust the government’s hired gunmen to keep us safe from terrorists, extremists, jihadists, psychopaths, etc.

Most of all, the powers-that-be want us to feel powerless to protect ourselves and reliant on and grateful for the dubious protection provided by the American police state.

Their strategy is working.

The tree of liberty is dying.

There will be no second American Revolution.

The message being sent to the citizenry is clear: there will be no revolution, armed or otherwise.

Anyone who believes that they can wage—and win—an armed revolt against the American police state has not been paying attention. Those who wage violence against the government and their fellow citizens are playing right into the government’s hands. Violence cannot and will not be the answer to what ails America.

Whether instigated by the government or the citizenry, violence will only lead to more violence. It does not matter how much firepower you have. The government has more firepower.

It does not matter how long you think you can hold out by relying on survivalist skills, guerilla tactics and sheer grit. The government has the resources to outwait, out-starve, outman, outgun and generally overpower you.

This government of wolves will not be overtaken by force.

Unfortunately, we waited too long to wake up to the government’s schemes.

We did not anticipate that “we the people” would become the enemy. For years, the government has been warning against the dangers of domestic terrorism, erecting surveillance systems to monitor its own citizens, creating classification systems to label any viewpoints that challenge the status quo as extremist, and training law enforcement agencies to equate anyone possessing anti-government views as a domestic terrorist.

What the government failed to explain was that the domestic terrorists would be of the government’s own making, whether intentional or not. What we are now experiencing is a civil war, devised and instigated in part by the U.S. government, which has engineered an environment in which peaceful revolution is impossible and domestic violence has become inevitable.

The outcome for this particular conflict is already foregone: the police state wins.

The objective: compliance and control.

The strategy: destabilize the economy through endless wars, escalate racial tensions, polarize the populace, heighten tensions through a show of force, intensify the use of violence, and then, when all hell breaks loose, clamp down on the nation for the good of the people and the security of the nation.

So where does that leave us?

Despite the fact that communities across the country are, for all intents and purposes, being held hostage by a government that is armed to the teeth and more than willing to use force in order to “maintain order,” most Americans seem relatively unconcerned. Worse, we have become so fragmented as a nation, so hostile to those with whom we might disagree, so distrustful of those who are different from us, that we are easily divided and conquered.

We have been desensitized to violence, acclimated to a military presence in our communities and persuaded that there is nothing we can do to alter the seemingly hopeless trajectory of the nation. In this way, the floundering economy, the blowback arising from military occupations abroad, police shootings, the nation’s deteriorating infrastructure and all of the other mounting concerns have become non-issues to a populace that is easily entertained, distracted, manipulated and controlled.

The sight of police clad in body armor and gas masks, wielding semiautomatic rifles and escorting an armored vehicle through a crowded street, a scene likened to “a military patrol through a hostile city,” no longer causes alarm among the general populace.

We are fast becoming an anemic, weak, pathetically diluted offspring of our revolutionary forebears incapable of mounting a national uprising against a tyrannical regime.

If there is to be any hope of reclaiming our government and restoring our freedoms, it will require a different kind of coup: nonviolent, strategic and grassroots, starting locally and trickling upwards. Such revolutions are slow and painstaking. They are political, in part, but not through any established parties or politicians.