Home Homosexuality This Lesbian’s Daughter Has Had Enough

This Lesbian’s Daughter Has Had Enough 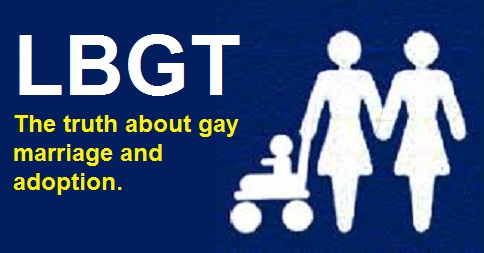 My name is Rivka Edelman, and I am the product of same-sex parenting.

Recently I published an essay on Public Discourse about the ruthless misogyny that pervades LBGT culture. I pointed out it that it can and will victimize women and children with impunity and then, in America’s narcissistic fugue, get hailed as brave and heroic.

Since my essay was published, there have been hundreds, maybe thousands, of posts calling me a liar or trying to shame, discredit, intimidate, and threaten me. Read this for details.  People I do not know have gone directly after my family and my job. They have posted information, mis-information, accusations, and threats against me. A vicious abusive “activist” well-known for his unhinged misogynistic cyber-stalking and violent threats, Scott Rose, sent blast e-mails to the university where I teach, describing himself as a “human right activist and an investigative journalist.”

Scott Rose has made threats of violence against Ryan T. Anderson, the editor who published my piece on October 2, 2014: 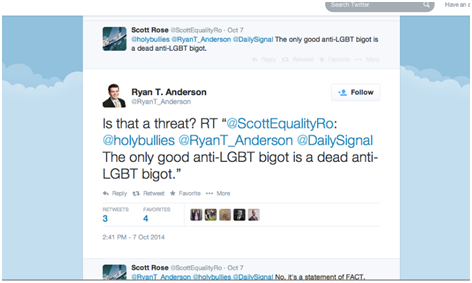 And menacing threats against me:

As with other adults who have come forward to criticize their childhood with gay parents, I am framed as a bigot or a liar or in some other way “unreliable.” In this flip-flop, a children’s rights activist and feminist is called “anti-gay” and a “bigot.”

Jeremy Hooper, Mr. Rose, and a gang of the allies who congregate and exchange information on Hooper’s blog, “Good As You,” are concerned about an amicus curiae brief I wrote in the Texas case regarding same-sex marriage (Fifth Circuit U.S. Court of Appeals). Along with three other adults who were raised by same-sex couples, I came forward to push back against the assertion that children have no disadvantages when raised by same-sex couples. Our arguments are not so easy to dismiss.

On Jeremy Hooper’s blog, activists have dug through all my past to make it public. They have also discussed contacting my ex-husband to get him to lie about me for them.

The Texas case is still pending. To date, the voices of adult children of the LBGT community have been stifled, but by some miracle four briefs were accepted in Texas against the objections of the pro-gay lobby side, which invoked procedural technicalities to try to get the four briefs thrown out. Three of the four amici curiae have published commentary on same-sex parenting here.

Once “activists” connected my Public Discourse piece of October 2, to the Texas brief, they went full throttle. Jeremy Hooper, the blogger at Good as You, uses his blog as a platform to harass, bully, and silence with impunity. Hooper published comments from his readers and thereby shared our home address and my daughter’s private information. They contacted other family members looking for information. They are not picky; true or made up assertions work for them equally.

To my ex husband, Rose wrote:

We can conclude with reasonable certainty that significant details of her young life were left out of her brief.

Mr. Rose wants my ex-husband to fill in the blanks. He was told never to contact my ex again. He has harassed me with the e-mail version of drunken dialing. And as the outrage against Mr. Hooper grows wider, he says he has no control over the comments. He says he never even met Rose. He cites law for polish. Hooper is careful and deliberate to say that sometimes he does not agree with Rose’s tactics.

I do not believe Mr. Hooper. He indeed allows commenters to leave violent threats against me. Under Hooper’s editorial review, my work information, along with my child’s name and people’s addresses, circulated freely.

Here Mr. Rose, human rights activist (is that a day job?), threatened my career with much bravado:

She thought she was going to get away with demonizing gay people behind pseudonyms “Ryvka Edelman” … et cetera, but my message to the gay-bashing bigot is YOU’LL NEVER EAT LUNCH IN THIS TOWN AGAIN.

She can forget that one.

And now that editors and English Department Chairs know that [Rivka Edelman] is a vicious anti-LGBT bigot, they have more information for their publishing and hiring decisions.

P.S. to Rivka – Rots a Ruck getting your work published in any non-religious, non-bigot publication, now that the world knows that [Rivka] is a malicious, lying, anti-LGBT bigot.

The police have his name now.

Perhaps they see us, the adult children of gay homes, as a threat, so we are attacked and our families threatened. They posted on Craigslist looking for information about me.

Next they deploy “activist” “Straight Grandmother.” She is the one who floats the idea of contacting my ex in the first place.

She states in an e-mail to my ex-husband:

They savage, bully, and threaten adults who grew up with gay parents in order to force a false narrative of happiness on them. More Orwellian logic.

Straight Grandmother goes on explaining the ins and outs:

It invades people’s personal privacy. But then on the other hand, they are the ones themselves who are offering up their personal lives as reasons to deny gays Civil Rights. See how this puts gay rights advocates between a rock and a hard place? They kind of force us to do something distasteful, but if we don’t then their lies stand.

They admit a pattern to invade people’s privacy – the new McCarthyism.

This is why I am contacting you and what I would like to know about XXXX, well specifically XXXX’s mother … if you are able to get an actual affirmation or rejection from the brother.

Here they are looking for more family. I can’t help but feel that whatever organization pays these men should be investigated.

I don’t know if you will provide the true answer to my question or not. I hope you will. And actually you don’t even have to respond to me. You can respond to Jeremy Hooper (contact@GoodAsYou.org) with the truth. Jeremy WILL protect you, but if you are brave you could have the fact attributed to yourself.

That promise to “protect” seems to confirm that Mr. Hooper knows this commenter and that they have planned to contact my ex-husband to get information.

Remember Federal Judges are reading the Life Story of XXXX as told by her. Her story as written by her, may influence a Judges ruling.

To cover himself Mr. Hooper says that some activists’:

Now that I have established the ins and outs of Jeremy Hooper’s blog, I can say I recognize these abusive behaviors as part of the culture I grew up in. Notice the lack of accountability, the deflections.

We the adult children are currently in the process of getting our stories ready for publication. And as gay marriage becomes the law of the land, we have expectations moving forward. We demand that the HRC publically honor and acknowledge our experience and issue apologies in print and online for all the attacks against all of us. And rectify immediately all that we have suffered by activists connected to the HRC or GLAAD.

These men may have revealed much more about themselves and the movement than they realize and damaged their credibility. I would not want to be Mr. Hooper or Rose when they realize that nobody will ever trust them again – no, not really, and not ever. They are like the writer who gets caught plagiarizing or a researcher who fakes results. There will always be “that” question in the back of people’s minds.

Let’s make a name for these guys – the one they have earned. Send this on to others.