Home Islam - Muslim Terrorists When Will the U.S. Face the Reality of War with Islam?

When Will the U.S. Face the Reality of War with Islam? 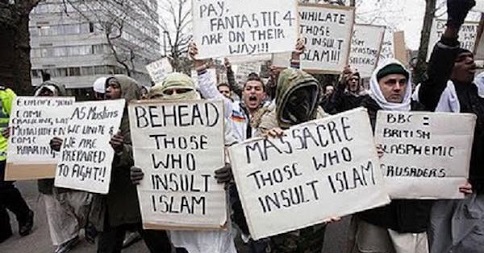 In recent days, Muslim terrorists struck New York, New Jersey, and Minnesota followed by White House Press Secretary Josh Earnest’s, dishonest, deceitful, and distorted defense of Islam. He told CNN on Monday morning that the Obama administration was winning the war of words against ISIL! He added that we are in a “narrative fight” with ISIS. Only a war of words! He also cautioned Americans against associating Muslims with terrorism!

Folks, this is getting embarrassing. All informed, sane, and honest people know that whenever anyone thinks or hears the word terror, they think of Islam. And of course, ISIS, ISIL, Boko Haram, al-Qaida, Hamas, etc., are the epitome of traditional Islam. Omar Abdel-Rahman, the “blind sheik,” is a famous Islamic scholar now serving a life prison term in an American prison for planning the 1993 bombing of the World Trade Center. He admitted that the terrorists are true Muslims! Do you believe a Muslim scholar (albeit a terrorist) or squirrely White House toadies?

Furthermore, words are important and that’s why everyone should read the Koran and listen to what Islamic scholars are saying about jihad, Sharia, a world caliphate, etc. Josh should tell the 29 people with shrapnel in their bodies from the NY bomb that it is “narrative fight.” No, this is a war of bombs, bullets, and beheadings.

The U.S. is in a Hundred Year’s War with traditional Islam, a war we are losing because government officials such as Josh, Clinton, Obama, etc., can’t even say “radical Islam.”

In The Gathering Storm, Winston Churchill warned, “if you will not fight for the right … when your victory will be sure and not too costly, you may come to the moment when you will have to fight with all odds against you and only a precarious chance of survival.” European nations have waited too long to admit that Islam has declared war on them and the odds of winning get smaller each day.

I firmly believe that France, Germany, England, Spain and maybe Italy, Sweden, and Norway have already been lost to Islam. This week, Hungary’s prime minister called for the European Union to “round up” illegal aliens and deport them to guarded camps “on an island or North Africa.” Even if they manage to maintain a strained coexistence, their nations will never be the same. England, Germany, and France are no longer England, Germany, and France! They are a grotesque caricature of their former selves. A new poll published this week shows 57% of Germans fear the Islamization of their country!

A television ad in Germany now promotes the wearing of the Muslim hijab by German women to “embrace tolerance.” What else! Will they embrace multiple wives to make them feel less odd? How about sex with children; after all, such people shouldn’t feel like low-life monsters, should they?

A groundbreaking survey revealed this week that “a quarter of Muslims in France follow hardline Islam and almost half support Sharia law.” In America, already 20% of Muslims said that violence is justified in order to make Sharia the law of the land! Face it: the Muslim invasion is a nightmare, not a dream.

America and the free world are at the point where it may be too late to fight. Our leaders are so cowardly that they always jump to the conclusion that Islam is never responsible for a terror attack even when all sane people know it is true. When the evidence is overwhelmingly Islamic, public officials often identify it as “work place violence,” an “isolated incident,” or a “lone wolf” attack. It seems the attacks are seldom motivated by their violent religion. A few days ago, Mayor de Blasio said, “there was no evidence of a terrorism connection as of late Saturday night.” As of Monday morning, everyone knew it was Muslim terrorism, but the mayor and governor were still unable or unwilling to pronounce “Islamic terrorist.”

Public officials assure us that New Yorkers will not be intimidated; but, of course, they will be intimidated. That’s what terror does to people. While officials need to discover any international connection to terror, it really doesn’t make that much difference. All committed Muslims are obligated to bring terror to any free non-Muslim people as they seek a world caliphate, but public officials are too cowardly to recognize the facts that the U.S. is at war, not with terrorism, but with traditional Islam.

The fact is we are in a war not of our choosing; and for officials not to recognize that fact is a cowardly, compromising, and for some, a calculated disaster.

The first thing that must be done is to ascertain who the enemy is; after all, we don’t want to bomb an innocent state. But our enemy is not a state but a theology and ideology that is now ensconced worldwide. Muslim clerics have clearly admitted that they plan a worldwide caliphate that will be run according to Sharia principles.

Sane, informed people recognized long ago that we are at war with Islam; however, public officials refuse to recognize the facts and may do so when it is too late to win the war. Cowardly officials will finally open their eyes to reality:

When local churches and schools in small cities are destroyed by low-tech Islamic killers.

When Americans are fearful of going to a mall, any mall, even in small cities.

When local politicians are beheaded in daylight for opposition to Islam.

Ahead of us, there is an enormous, dangerous, swirling, black cloud with no silver lining. It’s a major storm that will smack everyone.

While Nazi bombs were dropping on London’s military targets, Churchill told his cabinet members on May 28, 1940, “I am convinced that every man of you would rise up and tear me down from my place if I were for one moment to contemplate parley or surrender. If this long island story of ours is to end at last, let it end only when each one of us lies choking in his own blood upon the ground.” Present-day leaders in England are not made of the same stuff as Churchill. They have already surrendered and I suppose their wives are shopping for a burqa!

Less than four months after Churchill’s avowal to his cabinet, London was bombed 57 nights straight during the Battle of Britain. More than one million London homes were damaged or destroyed and more than 40,000 civilians were killed. But Britain’s leaders and civilians stood up and fought for their nation and won; today their leaders supinely speak of “peaceful Islam,” have elected a Muslim mayor in London, and have lost the battle without a fight.

We are at war with Islam and only a fool, knave, or traitor says otherwise; and to suggest that Islam is not responsible for terrorism is like suggesting a pimp has nothing to do with prostitution.

Hāsilpur Read more about the evil of Islam by clicking on the below website link.