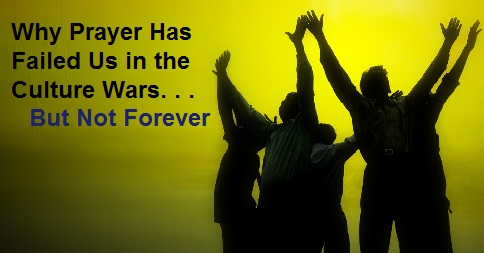 We Christians have always been very good at prayer. It’s an important act that brings us closer to Jesus Christ. There are many passages in the Bible that emphasize the importance of prayer.

But it finally dawned on me a few weeks ago that Christians keep praying and keep losing the culture wars. The two things are related. It is good that we pray, but it’s not good that we do so little of everything else, and when we do, we are clumsy and ineffective.

Recently in Los Angeles I attended a gathering of Catholics concerned about how to negotiate the advance of gay propaganda in their children’s schools, at their jobs, and among their family members. As a former Catholic, now evangelical, I did my best to be open-minded, knowing I was the odd man out at the gathering. It turned out to be fruitful for me because it helped clarify things that had been perplexing me.

One woman – I’ll call her Cindy – stood up in tears and said she was being driven out of her own church by fellow parishioners, who showed up wearing rainbow pins on the Sunday after Justice Kennedy announced the Obergefell decision. The rainbow brigade has set up a gay-positive church group. Not only do they meet in the church each week, but they also walk around like a master clique and give people who oppose them dirty looks.

“They have started to complain about people who don’t support gay marriage, saying that we’re not loving enough,” Cindy said. “And the church authorities are doing nothing to help us. They’re encouraging this.”

The priest who was running the discussion group told her she needed to pray for leadership and be patient. “We’re in a tough position these days, and I wish I could tell you that all the church leaders are going about things correctly, but the best I can say is, you need to pray for us. We need all of you to pray for us.”

Cindy looked at me with a quizzical expression, probably sharing my unspoken thought that maybe the priest could pull out his cell phone and start making some calls to people. In other words, do something. Cindy’s church is being taken over by people who want to destroy its theological basis and recruit people’s children!

Another woman – I’ll call her Mildred – got up and suggested that this trend be viewed as an opportunity for reflection and conversation. “And we have to make sure that we are setting a good example, too,” Mildred said, before ticking off the usual list of non-confrontational responses Christians are supposed to have to confrontational provocations from gay activists. “We have to show them that we are loving and non-judgmental and that our churches are a place where they can be welcome and not feel excluded. We have to make sure our own marriages are strong and we are working on our own sins. And we have to pray that these people see the truth and come out of the lifestyle.”

The priest nodded, energized by the prospect of people praying for the souls of LGBT saboteurs who are infiltrating and subverting Cindy’s church. Another gentleman stood up – I’ll call him Dan – to give Cindy his solution to the problem of sexual chaos encroaching on her sacred place of worship.

Dan said, “I’d like to tell you that there was a lesbian couple next door to us, when the kids were small. They hated us because of our faith, but we showed them we trusted them and we could have good neighborly bonds with them. We let them babysit our children and introduce our children to their friends. When one of the two lesbians died, the other was heartbroken, but on her deathbed she called me to her side to tell me she’d become a Christian and repented. I like to think it was because I prayed for her and because I didn’t push too hard.”

Unable to hold back anymore, I took the microphone.

“Hello, everyone,” I said. “I would like to let you guys know a little more about the gay community, since I was raised in it and spent most of my life immersed in it. It is full of very bold people who absolutely do not want to change their sexuality at all. They hate when you pray for them. They hate you in general.

“You need boundaries. Your children need boundaries. Don’t send your kids off to gay parties with gay neighbors based on the far-fetched hope that gay people will be baptized on their deathbed and thank you for praying them away from their lifestyle.

Sighs of relief rose up from the crowd, because countless people had been thinking the same thing I was and just wanted to hear someone say it into the microphone.

I saw, at that moment, a wall being built. It came to me from the Book of Nehemiah. When the Jews returned to Israel from Babylon, Ezra and Nehemiah were tactical and careful, wording their letters to powerful people carefully, and playing necessary politics. But Nehemiah kept his sword by his side as he built the walls. He was prepared for physical action. He was not blithely and naively praying for protection against the decadence and dangers of the ancient Near East.

What would have happened to the people of Israel if Nehemiah and the other Jews had prayed and prayed in Babylon, striving to look non-judgmental toward the Babylonians, and endeavoring to show sexually decadent people around them what stable, healthy families they had?

Too often, when Christians say, “I will pray for you,” they mean, “I’m not taking this on.” Prayer without any strategy, urgency, or action sounds rather like the smug legalism that all the prophets from Amos to Hosea ridiculed and condemned in ancient Israel. When St. Paul was struck blind on the way to Damascus, he did not spend the rest of his life praying and acting like a good non-confrontational friend to people who wanted to slaughter Christians. He got off his derrière and did stuff.

Nehemiah kept his sword by his side as he built because he knew there were real enemies, and it was his duty to be prepared and fight if he had to.

As someone who has been teaching Thoreau’s “Civil Disobedience” for fifteen years and wrote about it at length for my 2011 monograph, The Colorful Conservative: American Conversations with the Ancients from Wheatley to Whitman, I think Thoreau is relevant to us now.

When he talked about civil disobedience, he was not talking about civility. He was talking about defiance, but simply in a strategic way that would not degenerate into senseless violence. He believed in contemplation and close reading of great classics. He had chapters in Walden and Week on the Concord and Merrimack Rivers that clearly emphasize the discernment of higher laws such as chastity and ethical transcendence.

When the state came to collect a tax from him, he refused to pay it, and he went to jail. He wasn’t there for long, because someone paid the tax for him. But his entire premise in “Civil Disobedience” is that ideas, thought, and contemplation have to lead, at some point, to something with impact in the material world.

Kim Davis took stock of a corrupted system all around her – for instance, (1) a governor and attorney general who didn’t fight hard to honor Kentucky’s marriage laws, (2) a host of corrupted lawyers who claimed to be “defending traditional marriage laws” and were so horribly bad in their briefs and arguments that they might as well have been working as plants from the Human Rights Campaign, and (3) a Supreme Court with five wayward justices, possibly suffering from delusional disorders, who seem to think the Constitution is little more than a prompt for an English 101 free-writing exercise called “Everything I Love About My Gay Friends.” Seeing that the Lord is always right and the world had lost its mind, Davis engaged in civil disobedience.

I am sure that Kim Davis prayed prolifically in the months leading up to her arrest. She had some difficulties with marriages in her past, but it seems that after a recent conversion, she did what she had to do to make her life as aligned with Christ’s dictates as she could. She seemed, even when being hectored by angry gay out-of-towners flanked by nosy cameramen, to speak with love and reverence for God.

In other words, she did all the soft and cuddly, non-hating stuff that the diplomatic Christians ask us to do all the time. Including prayer.

Then she simply said, “No.” She would not sign the marriage license. Like Thoreau, she went to jail.

Marriage matters. Of the Ten Commandments, the first one mentioned that reflects upon social relations among human beings is “Honor your father and mother.” Gay marriage dishonors one or the other. There is no godly or Christian way to endorse it, whether you are in a state job or in a private job. This is the moment when you, as a Christian, must not retreat. When people pray, they pray so that at moments like this, you do as Kim Davis did, and stand up for God.

I will not name names, because there is no sense in shaming the many disappointing conservatives who have run around criticizing Kim Davis and warning that she is a bad standard-bearer for our cause. Most of them are fixated with the “law,” forgetting that John Adams said our Constitution was made for a moral and religious people. John Adams did not say our Constitution was made for graduates of Yale Law School.

They should be ashamed of themselves. Many of them, it seems, are telling me I should keep praying for some kind of divine intervention or guidance. They don’t get it – God has heard our prayers and sent us a chance to do something. Kim Davis gave us a chance to defy. Unlike so many others, she showed up to work with Nehemiah’s sword at her belt, and when the moment came, she unsheathed it.

Yes, pray for Kim Davis. Back her up – go to rallies, write to officials, post encouragement on Facebook. And most of all, when the fight comes to you, don’t just pray. Fight back.